Murray, Cardinals get shut down in loss to Seahawks 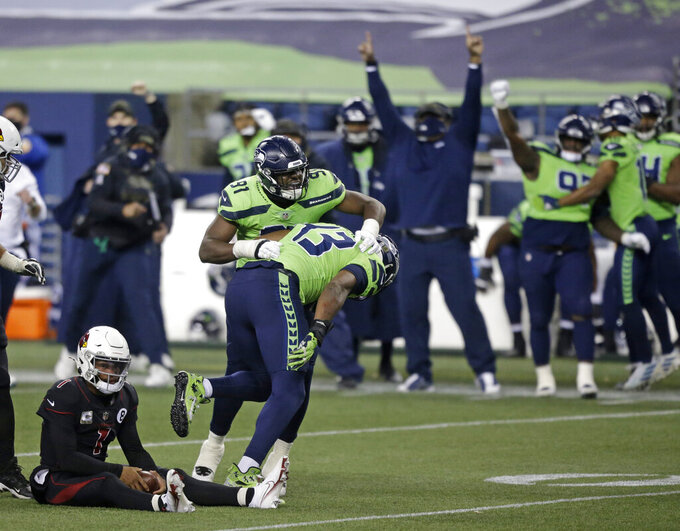 SEATTLE (AP) — Kyler Murray was crunched on Arizona's second drive of the game. A rude hello from Seattle’s L.J. Collier and Carlos Dunlap that left Murray with a sore right shoulder.

After not being touched by the Seahawks in their first meeting, Murray quickly knew this time was going to be different.

The Cardinals missed a chance to take control of the NFC West, falling 28-21 to the Seahawks on Thursday night. Arizona had an opportunity to sweep the season series from Seattle for the first time since 2009 and hand the Seahawks a third straight loss.

Just a few days after Murray and DeAndre Hopkins connected for a last-second touchdown in a dramatic victory over Buffalo, the Cardinals offense was mostly shut down by a Seattle defense that had been the worst in the league.

Murray was 29-of-42 passing for 269 yards and two touchdowns. But the Cardinals were held to just 57 yards rushing after entering the week as the top rushing team in the league.

“I think it was just flow of game," Murray said. "I don’t think we had a lot of rushing yards anyway – that’s just the way they were playing it. We had what we had and like I said, we had our chances, we just didn’t play well enough to win the game.”

While Seattle was able to shut down Arizona's rushing attack, the biggest difference was the Seahawks' ability to get pressure on Murray. When they met in Week 7 — a 37-34 overtime win for the Cardinals — the Seahawks failed to record a quarterback hit against Murray and produced very little pressure.

Thursday night, the pressure was there nearly from the start. Murray was sacked three times and Seattle recorded seven quarterback hits. Dunlap had two sacks, including the clinching play on Murray on fourth down with 38 seconds left after Arizona drove inside the Seattle 30.

“They obviously play hard and they’re a well-coached team. We hurt ourselves a bunch which definitely stopped some drives and put us in second-and-longs and third-and-longs, which we were able to stay out of the first game,” Arizona coach Kliff Kingsbury said. “But you’ve got to give them credit, they were flying around and tackled us when we had the ball in space.”

Even with the offense slowed, Arizona closed to 23-21 with 13:19 left when Murray capped a 15-play, 90-yard drive with a 3-yard TD pass to Chase Edmonds. The Cardinals defense held, but backed up near their goal line, J.R. Sweezy was called for holding on L.J. Collier in the end zone, giving Seattle a safety with 9:12 left.

Jason Myers added a field goal with 2:19 remaining for a seven-point Seattle lead, but Murray still had a chance for another late rally.

Murray completed six of seven passes to reach the Seattle 27, but that’s where the drive stalled. Murray was incomplete on three straight throws, and on fourth down Dunlap came free around the edge and corralled the quarterback before he could escape.

“We knew the game was on us and that’s how we wanted it,” Dunlap said.

Arizona will still have a say in the division race with two matchups still to come with the Los Angeles Rams. But the Cardinals schedule is far tougher moving forward than Seattle, whose next four games are against teams with a combined 8-28-1 record.

“We’re still very positive. We have six games left,” Arizona safety Budda Baker said. “We were in a situation, down by seven, even with all the penalties, we still could have tied the game or won the game.”