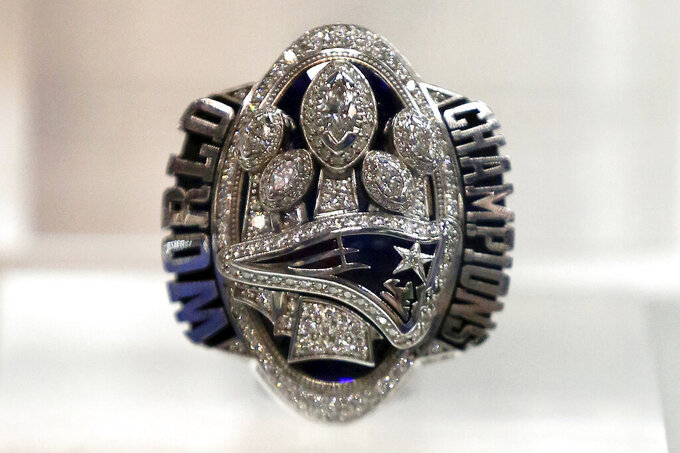 FILE - A New England Patriots Super Bowl LI ring is displayed at the Super Bowl Rings exhibit in Indianapolis, March 1, 2018. A New Jersey man who posed as a former New England Patriots player in order to buy and sell Super Bowl rings that he claimed were gifts to Tom Brady's family has been sentenced to three years in federal prison. (AP Photo/Gregory Payan, File)

SANTA ANA, Calif. (AP) — A New Jersey man who posed as a former New England Patriots player in order to buy and sell Super Bowl rings that he claimed were gifts to Tom Brady’s family was sentenced Monday to three years in federal prison.

Scott V. Spina Jr., 25, of Roseland was sentenced by a judge in Southern California's Orange County.

In 2017, Spina bought a Patriots’ 2016 Super Bowl championship ring from a Patriots player who then left the team. Prosecutors said Spina paid the player — identified only as T.J. — with at least one bad check and sold the ring for $63,000 to an Orange County broker of championship rings.

“When Spina obtained the player ring, he also received the information that allowed the former player to purchase Super Bowl rings for family and friends that are slightly smaller than the player rings," the U.S. attorney's office said in a statement.

Spina then called the company that made the rings, claimed to be the former player and ordered three family-and-friend rings with “Brady” engraved on them, claiming they were gifts for Brady’s baby, prosecutors said.

“The rings were at no time authorized by Tom Brady,” according to the criminal complaint.

Spina agreed to sell the rings for $81,500 to the same Orange County broker who bought the original ring, contending that Brady had given them to his nephews. The broker later tried to withdraw from the deal because he “started to believe that Brady did not have nephews,” according to the U.S. attorney's office.

In November 2017, the same day that the buyer tried to back out, Spina sold the rings to an auction house for $100,000 — much more than he'd paid for them, prosecutors said.

Spina pleaded guilty on Feb. 1. to one count of mail fraud, three counts of wire fraud and one count of aggravated identity theft for posing as the former Patriots player, falsely telling the broker that the family rings were ordered by Brady and defrauding him in connection with three wire transfers for the deposit.

At his sentencing, the judge also ordered Spina to pay $63,000 in restitution to the former Patriots player who sold him the genuine Super Bowl ring.