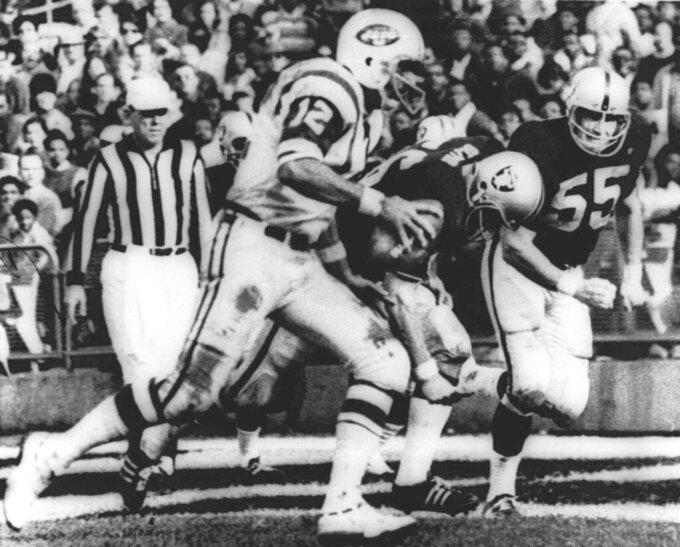 As part of its celebration of its 100th season, the NFL is designating a Game of the Week, each chosen to highlight a classic matchup. For this week, it’s the Raiders-Jets game.

To mark each Game of the Week, the AP is reprinting its original story of a classic matchup in the rivalry. The following is the news story and the game story from Nov. 17, 1968, when the Raiders rallied to beat the Jets 43-32 in an AFL game after NBC cut short the broadcast to show the movie “Heidi” as scheduled at 7 p.m. on the East Coast.

NEW YORK (AP) — Try to understand daddy if he grumbles at the mention of Heidi, that lovable, little storybook character.

Heidi threw a block into professional football Sunday night that resulted in a deluge of telephone calls that reached such proportions the fuses in the NBC switchboard blew out.

NBC incurred the wrath of football fans when it began a television special of Heidi in much of the country to the delight of millions of children.

Football fans have nothing against children — after all, some of them grow to be football players — but when Heidi began, the telecast of the American Football League game between New York and Oakland from Oakland ended to every section but the West Coast.

And there was one minute left. And what a minute it was, as Oakland scored two touchdowns for a 43-32 victory.

“It was a forgivable error committed by human beings who were concerned about the children expecting to see Heidi at 7 p.m.,” said Julian Goodman, NBC president. “I missed the end of the game as much as anyone else.”

The final minute of the game was shown on late night newscasts — 11:20 p.m. over WNBC in New York — but by then telephone calls from aroused fans had reached into the thousands.

When people couldn’t contact NBC because the lines were busy or because of the switchboard breakdown, they flooded New York newspapers with calls.

One man called The Associated Press office and said, “I’m on Long Island, and I got a scoop for you. Television just took the Jets game off.”

His anger was only surpassed by his amazement when he was told that the Jets had lost the game in that final minute.

A harried repairman, who helped restore the switchboard at NBC, said at 10:30 p.m., “The calls are starting to stop, but the operators are still pretty busy.”

The calls will finally stop, but the night Heidi upstaged pro football will be remembered for a long time.

A spokesman for NBC in Chicago said his office handled more than 200 phone calls while “a couple of thousand” other callers tied up the switchboard.

The spokesman said, “We were watching the game, too. As soon as it happened, we knew we would get some phone calls, but we didn’t expect anything like this. It was just unbelievable.”

In Buffalo, the Courier-Express and Evening News switchboards were flooded with callers, as was the local NBC affiliate.

There were nearly 850 calls at the Courier-Express in an hour, all wanting to know the score. The calls made it impossible for the switchboard to handle any outgoing calls during that period. Many didn’t believe the outcome when told.

The NBC outlet telecast the last minute of the game during the final evening sports program, a part of the 11 p.m. news.

OAKLAND (AP) — Oakland rookie Charlie Smith grabbed a 42-yard scoring pass from Daryl Lamonica with 42 seconds left for the go-ahead touchdown and Oakland scored again nine seconds later on a fumble recovery of the kickoff in the end zone to beat the New York Jets 43-32 in a wild American Football League game.

The Jets took the lead with 1:05 remaining on Jim Turner’s fourth field goal of the game, a 26-yarder. Smith took the kickoff to the Oakland 22. Lamonica then threw him a screen pass, and he gained 20 more.

The Jets were penalized for grabbing a face mask and, with Oakland in possession at the New York 42, Lamonica hit Smith on the right sideline. The 21-year-old Morris Brown graduate dashed into the end zone untouched.

On the kickoff, nine seconds later, New York’s Earl Christy fumbled the ball on the four-yard line, and Oakland’s Preston Ridlehuber picked up the ball and scored.

New York trailed going into the fourth quarter, but in two passes, Joe Namath covered 97 yards, both of them going to Don Maynard, and New York was ahead 26-22.

The Namath-Maynard combination nearly did in the Raiders, especially in the fourth quarter, as they ran rookie defender George Atkinson ragged. Atkinson has replaced the Raiders’ veteran cornerback Kent McCloughan, who was placed on the reserve list before the game.

Both teams were close in putting the game away in the third period. After the Jets took a 19-14 lead on Bill Mathis’ four-yard plunge, Namath brought New York down to the Oakland 15, but Raiders Dan Davidson and Ike Lassiter caught him behind the line. Turner then missed a 33-yard field goal attempt.

The Raiders came back with the help of two penalties on New York defensive tackle John Elliott and another on safety Jim Hudson, who was thrown out of the game. Smith finally ran the ball over from the three to put the Raiders ahead 22-19.

New York was forced to punt on the next series, and Rodger Bird gave the Raiders a golden opportunity to take a commanding lead when he returned it 50 yards to the Jet 10. Smith took the ball to the one on two plays, but on the first play of the fourth quarter, he fumbled, and Gerry Philbin recovered for the Jets.