O-line woes continue for Bengals, who fall in 0-2 hole 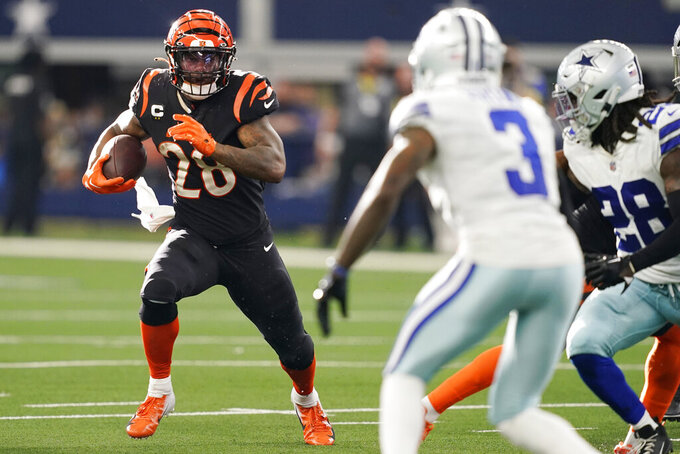 CINCINNATI (AP) — Some of the Cincinnati Bengals' offensive shortcomings seem all too familiar.

The offensive line is struggling to protect Joe Burrow. The offense starts slow and has to catch up in the second half. The issues were there early last season, and again during this year's opener, which the Bengals lost 23-20 in overtime to Pittsburgh.

That was the pattern again Sunday when the Bengals got down 17-3 to Dallas at halftime but rallied to tie the game, only to lose 20-17 on Brett Maher's 50-yard field goal as time expired.

The Bengals became the first AFC team since Denver in 1999 to start with consecutive losses after going to the Super Bowl the previous season.

Cowboys linebacker Micah Parsons was responsible for two of the six sacks of Burrow, who'd been sacked seven times by the Steelers the previous week.

The Bengals didn't score a first-half touchdown in either game.

But there is frustration everywhere.

“I feel like, as a whole, we have to take initiative," said Joe Mixon, who finished with 19 carries for 57 yards. “Everybody. Coaches, players, everybody is involved with everything. I’m not going to finger-point or anything like that. We have to put it on us to come out and execute. Be ready to play. For some reason, it seems like we’ve been coming up short in that area. We’ve been starting off slow; little penalties here and there that have been killing us.”

The Bengals' defense, facing backup quarterback Cooper Rush, kept the Cowboys mostly in check. Dallas had two TDs in the first half, but Cincinnati kept the Cowboys out of the end zone in the second. The defense also got its first turnover of the season when tackle D.J. Reader recovered a fumble by Cowboys tight end Dalton Schulz.

It all starts with the offensive line, which has four new starters. Burrow doesn't have time to look for receivers downfield, so the passing offense has become mostly short, quick throws. Opportunities to take shots downfield have been stymied by the pass rush and shell coverages designed to limit explosive plays.

“You just got to put it all together,” said La’el Collins, the Bengals' new right tackle. “This is our first time playing together, these first two weeks. I think we will be fine. We will get on the same page and just start doing what we do, and that’s coming out and setting the tone.”

Last week against the Steelers, Evan McPherson had an extra point blocked in regulation and missed a 29-yard field goal attempt in overtime. Both kicks would have won the game. Against the Cowboys, McPherson was perfect on attempts of 43, 50 and 46 yards. ... Receiver Tee Higgins, who suffered a concussion in Week 1, caught six passes for 71 yards and a TD.

Collins and right guard Alex Cappa were responsible for three of the Bengals' seven penalties. Collins had two false start penalties and Cappa another one that put Cincinnati behind the chains.

Veteran TE Drew Sample suffered a knee injury in the second quarter and did not return. The Bengals haven't provided an update.

13: Sacks of Burrow in the first two weeks of the season.

Offensive coordinator Brian Callahan and offensive line coach/running game coordinator Frank Pollack have to figure out how to give Burrow more time and create opportunities for explosive plays. Next Sunday, the Bengals (0-2) are at the New York Jets (1-1), who came from behind late to beat the Cleveland Browns.

“We got to take some shots (downfield) still,” receiver Ja'Marr Chase said. “You got to get that protection down, too. That’s the only way you can take shots. If Joe doesn’t have time, you can’t throw down the field.”