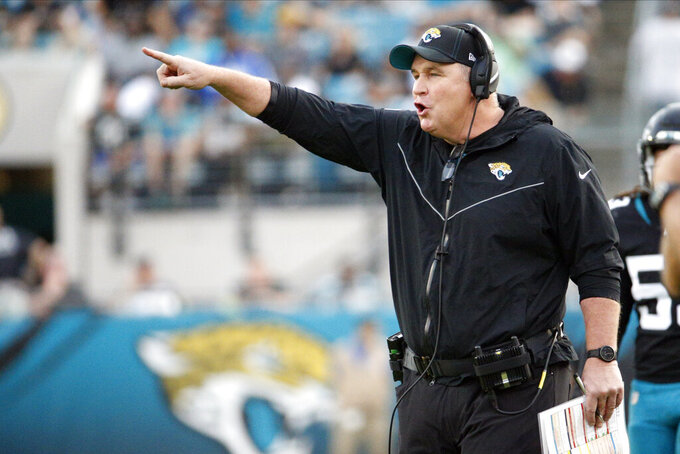 FILE - In this Sunday, Dec. 29, 2019 file photo, Jacksonville Jaguars head coach Doug Marrone directs his players against the Indianapolis Colts during the first half of an NFL football game in Jacksonville, Fla. The Jacksonville Jaguars have a chance to surprise, possibly even shock, much of the NFL. Just not themselves. After dumping three potential starters last week and assembling one of the youngest rosters in the league, the Jaguars are mostly a league-wide afterthought.(AP Photo/Stephen B. Morton)

JACKSONVILLE, Fla. (AP) — The Jacksonville Jaguars have a chance to surprise, possibly even shock, much of the NFL.

After dumping three potential starters last week — moves that raised speculation about the team tanking in hopes of getting the No. 1 draft pick in April — and assembling one of the youngest rosters in the league, the Jaguars are mostly a league-wide afterthought.

They’re the biggest home underdogs of Week 1, getting eight points against AFC South rival Indianapolis. They’re the longest of long shots (175-1) to win the Super Bowl and the odds-on favorite to lose the most games.

“I really think that this team can be special,” coach Doug Marrone said Wednesday. "That’s what I feel, that’s what we put together.”

Marrone and general manager Dave Caldwell have been insistent that Jacksonville is far from in rebuilding mode. They view their revamping of the roster as more of a cleansing of the failed Tom Coughlin regime.

They parted ways with a number of me-first guys in the locker room, beginning with cornerback Jalen Ramsey last October, and made decisions with an eye toward repairing what had become close to an untenable salary cap situation.

Undrafted rookie running back James Robinson was the team’s biggest surprise of training camp, making it easier to waive Fournette. First-round draft pick K’Lavon Chaisson will get on the field much faster without Ngakoue atop the depth chart. And Harrison had fallen behind fourth-year pro Josh Jones and rookie Daniel Thomas.

Jacksonville ended up with 16 rookies, including four undrafted guys, on its 53-man roster. Only two of those are projected starters: Robinson and cornerback CJ Henderson. The rest will open the season as backups.

So this isn't like 2013, when Jacksonville clearly was starting over and looked a lot like an expansion team while losing their first eight games by a combined 178 points.

Caldwell and Marrone believe their offensive line is better than most others in the league, their receiving group is the deepest it’s been in years and second-year quarterback Gardner Minshew is poised to take a huge step in Jay Gruden’s offense.

On the other side of the ball, they see linebacker Myles Jack flourishing in a return to his normal position, feel fortunate to have been able to sign Timmy Jernigan after a rash of injuries and opt-outs along the defensive line and think Josh Allen and Chaisson have the potential to be one of the top pass-rushing duos in the league.

The season opener will provide a better indication of who's right: oddsmakers or Jacksonville's players and coaches.

“We don’t feel like we’re underdogs at all,” receiver DJ Chark said. “We don’t really see how we could be underdogs.”