Pack hope history repeats itself after another opening loss 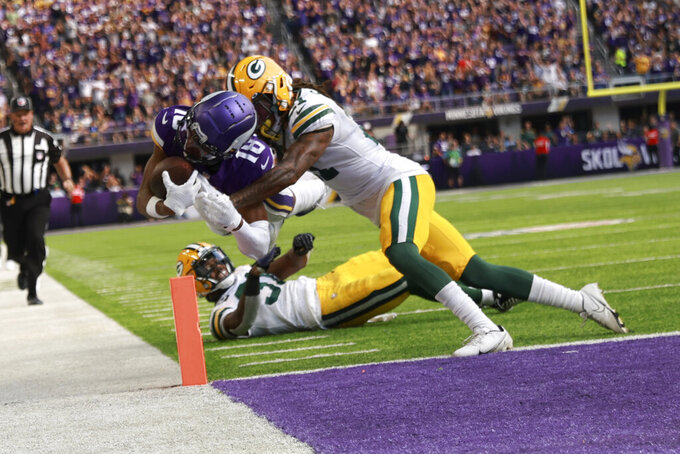 After suffering a lopsided loss in their opener for a second straight year, the Green Bay Packers can only hope the rest of their season also has a familiar feel.

The Packers fell 38-3 to the New Orleans Saints in their first game last year but went on to finish 13-4 and earn the NFC’s top playoff seed. They’re leaning on that experience as they try to bounce back from Sunday's 23-7 loss at Minnesota.

“I think a lot of our veterans, this isn’t their first rodeo and not the first time they’ve suffered a defeat,” Packers coach Matt LaFleur said Monday. “But it’s always interesting to see how young guys respond to a defeat or not playing your best. You’ve got to be critical, but at the same time, you still have to try to put your arm around these guys because you want them confident.”

One of those young guys is rookie second-round pick Christian Watson, who got wide open but dropped a potential 75-yard touchdown pass from Aaron Rodgers on the Packers’ first play from scrimmage.

That was the most glaring of many mistakes the Packers made on a day that left them open to second-guessing.

As the Vikings built a 17-0 halftime lead, Minnesota’s Justin Jefferson rarely had to match up against Jaire Alexander, the Packers’ best cornerback. Jefferson capitalized by scoring two touchdowns and finished the day with nine catches for a career-high 184 yards.

“Why I wasn’t on him, that’s not my call,” Alexander said after the game. “Anybody who watches me play, you know that’s what I want.”

LaFleur noted Monday that it’s tough to assign a single cornerback to a particular receiver for the course of an entire game “unless you are committed to playing man coverage every snap.”

He complimented the Vikings for the way they created advantageous matchups for Jefferson and used him much the way the Packers utilized Davante Adams, the two-time All-Pro wideout now with the Las Vegas Raiders.

“Obviously it didn’t hurt them,” LaFleur said. “So maybe we’re doing something wrong in practice, whatever it may be. But certainly it’s disappointing, I thought our guys were locked in, ready to go.”

The Packers averaged over 6 yards per carry, with Aaron Jones running for 49 yards on five attempts and A.J. Dillon running 10 times for 45 yards. Dillon also had five catches for 46 yards, both team highs. The problem was the Packers didn’t get the ball enough to their two dynamic running backs.

“We’ve got to get them more involved, whether it’s in the run game, pass game, however it may be,” LaFleur said after the game.

The fact that Dillon’s 46 yards receiving led the team underscored the need for more production from the wideouts. The Packers didn’t have their top returning receiver available with Allen Lazard battling an ankle injury.

An offensive line missing injured tackles David Bakhtiari and Elgton Jenkins allowed four sacks and didn’t give Rodgers enough time to throw. The goal-line offense let Green Bay down when an unblocked Za’Darius Smith stopped Dillon on fourth-and-goal from the 1.

A defense that believes it can be among the league’s best didn’t force a turnover.

Watson squandered an opportunity to make an instant impact on his first NFL snap. ... CB Eric Stokes, S Adrian Amos and S Darnell Savage struggled in coverage during the Vikings’ first-half flurry. ... G Jake Hanson got beaten on a sack by Smith and had plenty of trouble in his first career start.

Reserve LB Krys Barnes (ankle) was carted off the field in the fourth quarter, though LaFleur said Monday the injury might not be as significant as it looked. ... LB Quay Walker and reserve CB Keisean Nixon left with shoulder injuries. ... OG Jon Runyan left in the third quarter with concussion symptoms.

395 — The number of consecutive passes Rodgers had thrown against NFC North teams without an interception before Harrison Smith picked him off late in the second quarter. Rodgers’ last pick against a division foe had been on Dec. 29, 2019, against Detroit.

The three-time defending NFC North champions will be looking up at Minnesota and Chicago in the division standings this week as they prepare to open their home schedule against the Bears on Sunday night. The Packers have beaten the Bears six straight times.