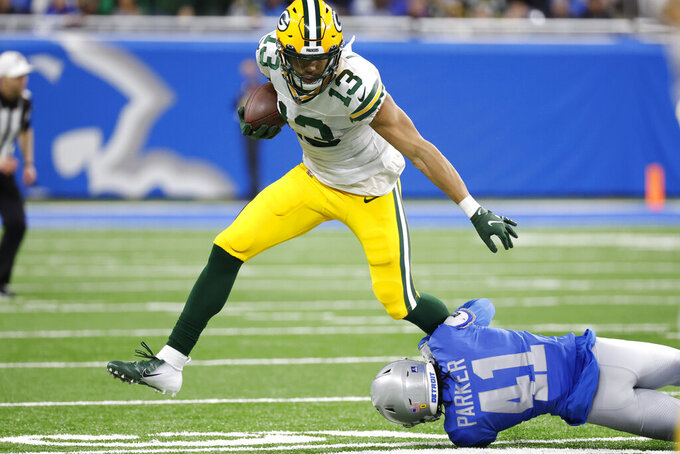 FILE - Green Bay Packers wide receiver Allen Lazard (13) is tackled by Detroit Lions cornerback AJ Parker (41) in the first half during an NFL football game Jan. 9, 2022, in Detroit. Lazard did not practice this week and is unlikely to play in their season opener Sunday, Sept. 11, 2022, at Minnesota. The team's injury report lists Lazard as doubtful due to an ankle injury. (AP Photo/Rick Osentoski, File)

The Packers’ injury report lists Lazard as doubtful due to an ankle injury.

Lazard is the Packers’ top returning receiver after catching 40 passes for 513 yards and eight touchdowns last season to set career highs in all three categories. The Packers lost much of their firepower at wide receiver when two-time All-Pro Davante Adams was traded to the Las Vegas Raiders.

Packers offensive linemen David Bakhtiari and Elgton Jenkins are listed as questionable as they return from torn anterior cruciate ligaments in their left knees.

Bakhtiari has appeared in just one game since hurting his knee on Dec. 31, 2020. He played in the Packers’ regular-season finale at Detroit last season, but wasn’t available for their NFC divisional playoff loss to the San Francisco 49ers.

If they’re both available, Bakhtiari would start at his usual spot at left tackle with the versatile Jenkins starting at right tackle.