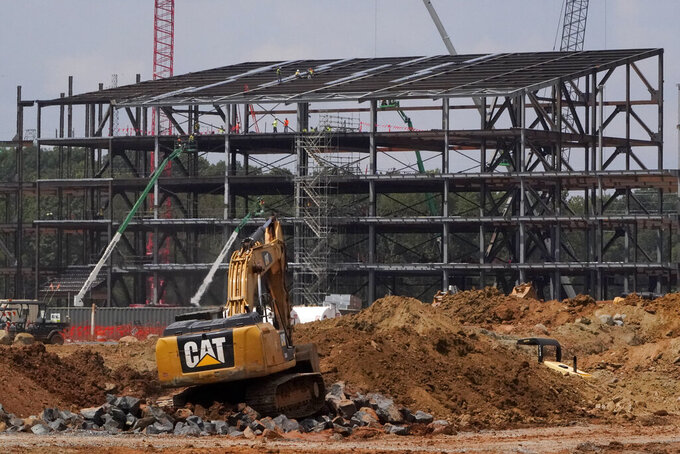 Tepper, who made billions in hedge funds, is the NFL’s wealthiest owner. The filing will not affect the NFL’s Panthers or Major League Soccer’s Charlotte FC in any way.

It’s unclear at this point what will happen to the half-built practice facility.

Tepper has invested more than $175 million into the facility, which is located about 25 miles south of the team’s current downtown stadium and headquarters in Charlotte, North Carolina.

GT Real Estate Holdings, LLC (GTRE), a Delaware limited liability company, announced to The Associated Press in a statement late Wednesday night that is has begun a court-led financial restructuring process in Delaware to effect an orderly wind-down of the project. The action follows the termination and rescission of the agreements with the City of Rock Hill that related to the project, which GTRE previously announced.

GTRE also announced that it has received a commitment for $20 million in financing from DT Sports Holding, LLC, subject to court approval, which will allow the company to fund a process to address its legitimate creditor claims, as well as to preserve, protect and enhance the Rock Hill site for the benefit of all stakeholders.

“In recent weeks, GTRE has been confronted with various claims, some valid and some not, from vendors, contractors and other third parties, including York County, SC," GT Real Estate Holdings said in a statement. "GTRE is taking this action to ensure legitimate claims are processed as fairly and expeditiously as possible under a court supervised process, and to achieve the project’s orderly and safe wind-down. GTRE intends to resolve its legitimate obligations.”

The City of Rock Hill does not plan to make a statement until it has had a chance to review the bankruptcy filing Thursday, a city spokesperson said.

The Panthers announced on April 19 they had terminated their agreement with the City of Rock Hill, South Carolina.

The bankruptcy ends a bitter back-and-forth public disagreement between Tepper and the city of Rock Hill.

Tepper’s company said it negotiated with the city for more than a year, warning them in March they had 30 days or the Panthers would pull out. They said in a statement in April that is “unfortunate that some recently decided to conduct a misguided, destructive public relations campaign to obscure their failures.”

Rock Hill officials responded to the announcement, saying the Panthers' announcement was “misleading and erroneous” and that they embraced the Panthers, welcomed their headquarters to South Carolina and “did everything to make this project a success and has not defaulted on any of our obligations.”

“It was and remains our intention to continue negotiating in good faith while protecting the interests of our taxpayers,” the City of Rock Hill had said. “In fact, in the past few weeks we have attempted to meet with the Panthers on numerous occasions to no avail.”

The city also claimed that it had met all obligations required under the agreement, but could not provide the Panthers unlimited resources and had to protect taxpayers.

The Panthers' headquarters and practice facility had been expected to be completed in 2023.

It is unclear if Tepper will attempt to build another practice in the future and, if so, where that will be.