Patriots tight end Smith poised to have bounce back season 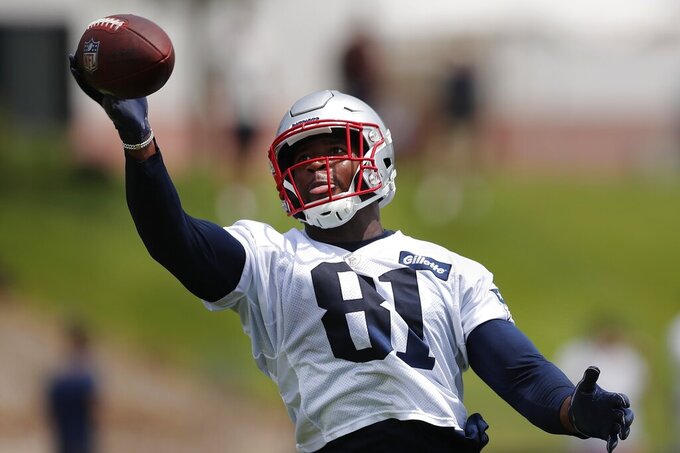 FILE - New England Patriots tight end Jonnu Smith (81) takes part in drills at the NFL football team's practice facility in Foxborough, Mass., Tuesday, May 31, 2022. Smith wasn’t looking for a fresh start as much as a place to burnish his reputation as one of the league’s top tight ends when he left the Tennessee Titans and signed with the New England Patriots prior to last season. (AP Photo/Michael Dwyer, File)

FOXBOROUGH, Mass. (AP) — Jonnu Smith wasn’t looking for a fresh start as much as a place to burnish his reputation as one of the league’s top tight ends when he left the Tennessee Titans and signed with the New England Patriots prior to last season.

He was coming off a career year in Tennessee and was one of the most sought-after names available on the open market. The Patriots were in search of an upgrade at the position and ended up investing $87.5 million dollars to lure both Smith and former Chargers standout Hunter Henry to New England.

The idea was to recreate a version of the Rob Gronkowski-led two-pronged tight end attack the Patriots enjoyed during Tom Brady’s title-filled tenure.

New England got a partial return on its investment in 2021, with Henry recovering from a slow start to post 50 catches for a team- and career-high nine touchdown receptions. Smith struggled to find rhythm and managed 28 catches for 295 yards and a career-low one TD catch.

Smith said Friday that he believes having a full year in the system under his belt will help him in Year 2. Despite the rough season he also hasn’t lost his zeal for the franchise that signed him to a four-year, $50 million deal.

After being targeted five or more times in his first seven games in 2021, Smith seemed to struggle at times to adjust to the Patriots’ offensive system.

He was targeted an average of only 1.6 times in the final nine games he played in, relegated to mostly run blocking duties in the second half of the season.

Improving his chemistry with Mac Jones was a priority this offseason and he made it a point to attend a throwing session the quarterback organized in April that included receivers Nelson Agholor and Tre Nixon, along with running back Damien Harris.

“That’s what we had an offseason for,” Smith said. “That’s where that comes, with time. Just learning each other, knowing each other. We all have to continue to be on the same page — wide receivers, tight ends, running backs — whatever it may be. … We all kind of know what we’re thinking in each other’s heads. Just continue to help the team and put us in a better situation for winning.”

One thing that could benefit the entire offense is what players have been describing as a more streamlined offense from top to bottom. The coaching staff has also experimented with placing Smith in different spots during the opening week of camp.

Smith said it's an example of how he’s willing to adapt in whatever ways he is asked.

It’s why he’s not putting extra pressure or expectations on himself.

He’s concentrating instead on what he did to garner the Patriots' interest in the first place.

"I got here by just loving football. Loving my teammates. Loving the guys around me,” Smith said. “All that stuff just comes with it. We didn’t grow up playing in our backyard thinking about contracts. We just played because we love the game. ... Everything else will take care of itself.”