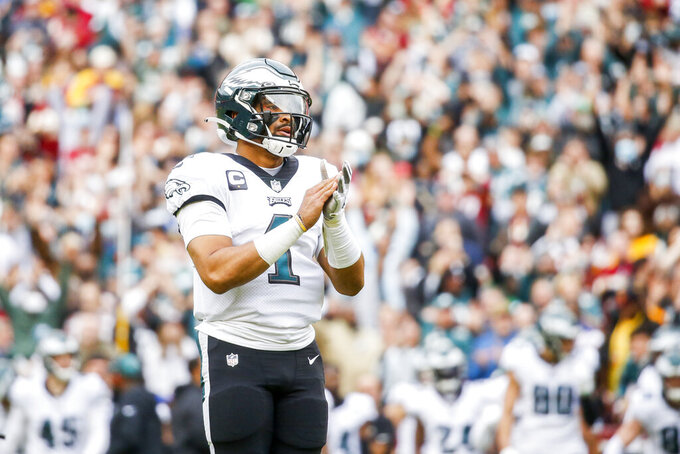 Philadelphia Eagles quarterback Jalen Hurts (1) celebrates after his team's first touchdown during the first half of a NFL football game between the Philadelphia Eagles and the Washington Football Team on Sunday, January 2, 2022 in Landover, Maryland.(Shaban Athuman/Richmond Times-Dispatch via AP)

BETTING LINE: Cowboys by 7, according to FanDuel SportsBook.

TURNOVER DIFFERENTIAL: Cowboys plus-13, Eagles plus-1.

COWBOYS PLAYER TO WATCH: Dalton Schultz is now the second Dallas tight end to have at least 70 catches in a season. Jason Witten, the club’s career leader in catches, yards receiving and games, had nine such seasons. Schultz was targeted a season-high 10 times with six catches for 54 yards against the Cardinals. Although the overall offensive production didn’t show it, Dallas is more efficient when Schultz has a prominent role.

EAGLES PLAYER TO WATCH: Rookie TE Tyree Jackson. A quarterback in college at Buffalo, Jackson has been a favorite project of the Eagles’ staff. They’ve brought him along slowly, activating him for just eight games, with no catches. But with the other two tight ends, Dallas Goedert and Jack Stoll, on the reserve/COVID-19 list as the weekend approaches, and the game essentially meaningless in terms of the Eagles’ playoff seeding, this could be the week fans see Jackson’s heralded athleticism in action.

KEY MATCHUP: Assuming starters play a significant role, the key matchup for the Eagles is always their offensive line, which propels the league’s top rushing attack, against the other team’s front seven. Dallas has a formidable front seven, though it ranks just 15th against the run, and dynamic rookie linebacker/edge rusher Micah Parsons went on the reserve/COVID-19 list Wednesday.

KEY INJURIES: Cowboys CB Trevon Diggs (illness) is out, robbing Dallas for a key playmaker. ... WR Michael Gallup is out for the playoffs after tearing the ACL in his left knee last week against the Cardinals. ... TE Blake Jarwin (hip) has been designated for return from injured reserve, which mostly likely means a return in the playoffs. Jarwin hasn’t played since Week 8. ... For the Eagles, top RB Miles Sanders is out with a broken hand but the team is hoping he can return for the playoffs. ... A total of 12 players went on the reserve/COVID-19 list this week. All are eligible to return by Saturday, but if the Eagles want to hold any of them out, they can bring in practice squad players without having to cut anyone from the roster.

STATS AND STUFF: The Cowboys are plus-13 in turnover margin, third in the NFL. They haven’t finished plus-13 or better since 1981. The 25 interceptions are the most for Dallas since the 1999 team had 33. ... The Cowboys are 5-0 against the NFC East. They can go undefeated in the division for the third time (1969, 1998). ... QB Dak Prescott is 24-6 against the NFC East. The only loss in his past 16 starts in the division was to the Eagles in 2019. ... Pollard needs 31 yards rushing to reach 750 for the season. It would make him and Elliott (915 yards) the first Dallas tandem with at least 750 yards apiece since Calvin Hill (1,036 yards) and Walt Garrison (784) in 1972. ... WR Amari Cooper has tied his career high with eight receiving TDs. ... Parsons, if he plays, needs two sacks to break Jevon Kearse’s rookie record of 14½ for Tennessee in 1999. Diggs is tied with Everson Walls for the club record with 11 interceptions. It’s the most in the NFL since Walls set the mark as a rookie in 1981. But Diggs won't play. ... P Bryan Anger has a career-high 44.6-yard net average. The club record is 42.5 by Chris Jones in 2013. ... The Eagles haven’t beaten a team that currently has a winning record, but this is the first group in franchise history to make the playoffs after a 2-5 start … The Eagles are 41 yards away from the franchise rushing record of 2,607, set in 1949 (a 12-game season) … They are one of three NFC teams to make the playoffs four of the last five seasons … The Eagles’ four defensive touchdowns lead the NFL.