With playoffs possible, Vikings try not to stumble at Bears 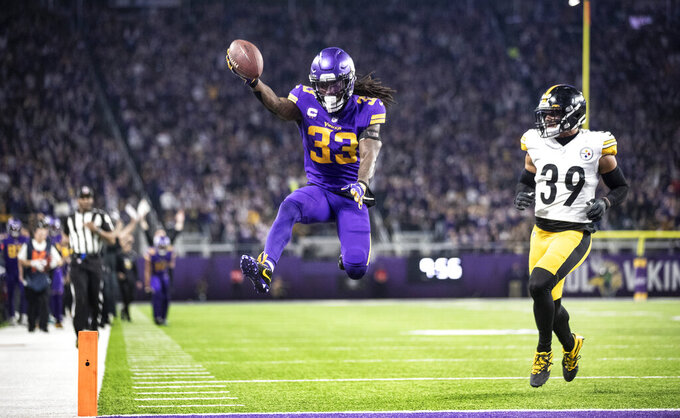 Minnesota Vikings running back Dalvin Cook (33) jumps into the end zone near Pittsburgh Steelers free safety Minkah Fitzpatrick (39) for a touchdown run in the second quarter of an NFL football game in Minneapolis, Thursday, Dec. 9, 2021. (Jerry Holt/Star Tribune via AP)

BETTING LINE: Vikings by 4, according to FanDuel SportsBook.

TURNOVER DIFFERENTIAL: Vikings plus-5; Bears minus-11.

VIKINGS PLAYER TO WATCH: RB Dalvin Cook. Returning ahead of schedule from a dislocated shoulder that kept him out of one game, Cook rushed for 205 yards on 27 carries last week against the Steelers. His production will be more critical with backup RB Alexander Mattison on the COVID-19 reserve list. Over the first three-plus years of his career, Cook was either out with an injury or bottled up by the Bears. He finally had his first breakout against Chicago a year ago at Minnesota, with 132 rushing yards and a touchdown on 24 carries plus five catches for 27 yards. The Bears have struggled against the run, and DT Akiem Hicks and LB Roquan Smith are banged up.

BEARS PLAYER TO WATCH: QB Justin Fields. Chicago's prized rookie showed some promise and had his missteps last week. He threw for 224 yards and ran for 74 after missing back-to-back games because of broken ribs. Fields strung together several solid outings prior to the injury.

KEY MATCHUP: Vikings' defensive front against the Bears' offensive line. Minnesota leads the league with 41 sacks even though no player has more than six. And the Vikings could be facing a depleted line, with both of Chicago's starting tackles possibly unavailable. LT Jason Peters (ankle) exited last week's game, and RT Larry Borom was one of 12 Bears players on the reserve/COVID-19 list through Thursday.

SERIES NOTES: The Bears have won five of the past six meetings.

STATS AND STUFF: Minnesota is one of six NFC teams with six or seven wins. ... The Vikings nearly blew a 29-0 lead last week, hanging on by forcing an incomplete pass in the end zone on the final play. ... Minnesota is the only team in the league without a loss by more than eight points. ... QB Kirk Cousins had season worsts against the Steelers in completions (14), completion percentage (45.2) and passer rating (63.4). ... Cook last week passed Ted Brown for fifth place on the team's all-time rushing list. ... WR Justin Jefferson (2,688) needs 68 receiving yards for the most in NFL history in a player's first two seasons in the Super Bowl era. ... The Vikings have allowed only 18 sacks, the second fewest in the league behind Tampa Bay. ... Vikings S Harrison Smith has five interceptions and one fumble recovery in 15 career games against the Bears. ... Chicago has lost seven of eight. ... The 45 points last week were the most allowed by the Bears since a 48-23 loss to Arizona on Sept. 20, 2015. ... LB Robert Quinn is tied for third in the NFL with 14 sacks — 3 1/2 shy of Hall of Famer Richard Dent's franchise record in 1984. ... WR/PR Jakeem Grant had the NFL’s first punt return for a touchdown this season last week when he ran one back 97 yards — the longest punt return for a score by any Bears player since at least 1960, which is as far back as the team’s data on that statistic go. The sixth-year pro also caught a flip pass in the backfield and turned it into a 46-yard TD.

FANTASY TIP: With Thielen out, K.J. Osborn was targeted nine times, making three catches for 83 yards while elevating to the No. 2 role behind Jefferson. Osborn has a TD in each of the last two games for the Vikings. His 64-yard TD reception in Week 2 against Arizona stands as the team's longest play of the season.