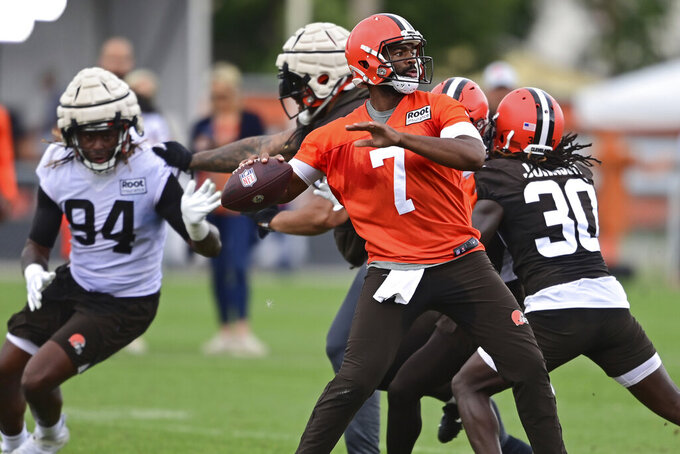 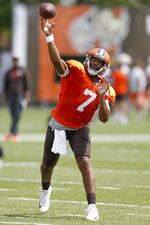 CLEVELAND (AP) — Jacoby Brissett will finally make his delayed debut for the Browns.

The veteran quarterback, set to fill in as Cleveland's starter while Deshaun Watson serves his upcoming 11-game NFL suspension, will start Saturday night's exhibition finale against the Chicago Bears.

Brissett has yet to see any action during the preseason but will finally get some snaps with the first-team offense in a game setting. Coach Kevin Stefanski doesn't know exactly how long Brissett and Cleveland's other starters will be on the field.

Earlier this week, Bears coach Matt Eberflus said his starters will play “up to a half.”

Stefanski is aware of Chicago's plans but won't be swayed by them.

“Yeah, I know what coach Flus is doing,” Stefanski said. “We’re going to do our own thing.”

This will be a dress rehearsal of sorts for the Sept. 11 season opener at Carolina when Brissett will square off against former Browns quarterback Baker Mayfield, who was named the Panthers' starting QB earlier this week.

The Browns are counting on the 29-year-old Brissett to hold things down while Watson is out after he agreed last week to his suspension, a $5 million fine, and to undergo mandatory counseling and treatment for violating the league's personal conduct policy.

Watson was accused of sexual misconduct and harassment by two dozen women during massage therapy sessions in Texas while he played for Houston. The three-time Pro Bowler, who signed a $230 million contract with Cleveland, will begin his suspension on Aug. 30.

Like all coaches, Stefanski has been searching for the right balance in getting his team ready for the regular season while also keeping his players healthy and fresh.

Stefanski believe it's important for the starters to get some preseason snaps, even if it's only a few.

"I don’t know if there’s one correct way to do it. We’ll just do what we think is best,” he said. “We just felt like Jacoby should get some reps out there, get some snaps out there with the ones in a game setting. But he’s doing a really nice job of getting a ton of reps out here, as well.”

Stefanski was reminded of the fragility of a season during Thursday's practice, when a defender got too close to Brissett and he banged his right throwing hand while following through on a throw.

Brissett wasn't hurt, but that didn't stop Stefanski from yelling at his defense.

“I was seeing red for a minute there,” he said. “That’s a rule. Our guys have done an awesome job all camp of staying away from the quarterback and we just have to continue to do a good job there.”

NOTES: RT Jack Conklin will be kept out against the Bears as he continues his comeback from season-ending knee surgery. Conklin has been getting first-team reps the past week. ... Stefanski said he'll keep other select starters out as well. ... CB Greg Newsome II returned after missing several weeks with a hamstring injury. ... Rookie RB Jerome Ford was also back after a two-day absence. Stefanski said the fifth-round pick could be an option to return kickoffs.