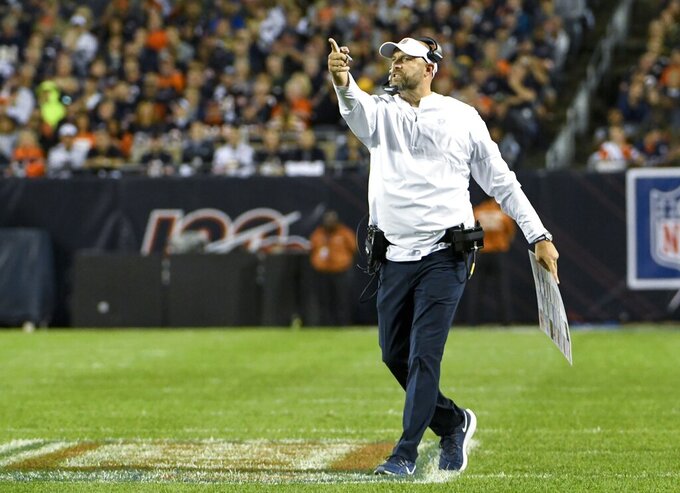 LAKE FOREST, Ill. (AP) — From the time quarterback Mitchell Trubisky bobbled a snap and handoff to Tarik Cohen on the first play Thursday night, the Chicago Bears struggled on offense in a 10-3 loss to the Green Bay Packers.

Bears coach Matt Nagy insisted Friday what happened to Trubisky and the offense was an aberration. If it wasn't, the Bears could be headed for a long, difficult fall from the 12-4 record of last season.

The Bears hadn't scored so few points since John Fox was coach in 2017. They rushed for only 46 yards and Trubisky had 11 on scrambles. Trubisky threw a critical fourth-quarter interception to former teammate Adrian Amos in double coverage in the end zone with the Bears going for the tie.

Nagy took responsibility for not trying a field goal from 50 yards and not running enough in a tight game. Trubisky seemed hesitant and unsure of his passes.

"We're all down right now," Nagy said. "That was a game where there was a lot of hype to it. It's a very meaningful game. But at the same time, we have to make sure that we understand that it is Week 1. If he is down, that's OK. I'd rather him be down than be happy."

The 10 points allowed to Green Bay tied the fewest the Packers have scored against the Bears since Rodgers became Packers quarterback. Green Bay also beat the Bears 10-3 in the 2010 regular-season finale with Rodgers at quarterback.

Leonard Floyd had two sacks and the Bears had five total as they limited Green Bay to 166 net passing yards.

The offensive line blocked inconsistently and with too many penalties. Three holding calls and illegal hands to the face were called against the offensive line. Trubisky was sacked five times.

"We have to clean up some things offensively," guard Kyle Long said. "It falls on us. The guys up front will talk about little things you want to do. I've said it the last seven years, losses usually come down to up front."

Wide receiver Allen Robinson caught seven passes for 102 yards. He went through a strong training camp and appears ahead of last year when he was coming off an ACL tear.

Trubisky is in his third year but played like a rookie as he held the ball too long and made indecisive throws. He completed 26 of 45 for 228 yards but couldn't put together a touchdown drive.

"I felt like I made some good throws here and there, made some good decisions for the most part," Trubisky said. "But I think it was just sloppy by myself and as an offense as a whole, just going through all our procedures. It was just tough. We couldn't find a rhythm."

Tight end Trey Burton missed the game because of a groin injury and usually plays a vital role in the offense. Nagy said he can't be certain Burton will be available in Week 2.

11. The Bears gave their running backs only 11 carries. They didn't draft running backs David Montgomery and sign Mike Davis to give them 11 total carries. And Cohen didn't have an official rush attempt, although he did have one on a play called back by penalty and Trubisky fumbled the handoff on another.

Chicago travels to Denver on Sept. 15 and runs up against former Bears defensive coordinator Vic Fango, the Broncos' head coach. If Trubisky had trouble reading Green Bay's defense, this won't be much easier because he built the current Bears defense using disguised pass coverages.