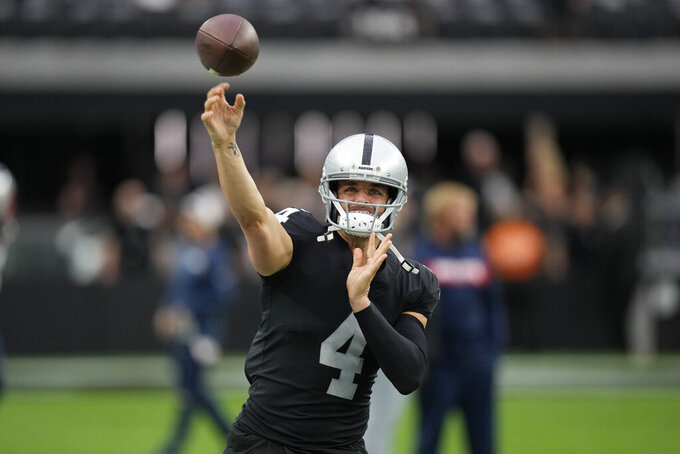 HENDERSON, Nev. (AP) — The offseason trade heard ’round the league is ready to come full circle.

Las Vegas Raiders quarterback Derek Carr and wide receiver Davante Adams were reunited in March and will be the centerpieces of the team's offense in Sunday’s season opener at the Los Angeles Chargers.

For the former college teammates at Fresno State, this is nothing new.

“It’s gonna be the first time people see us do it together in the NFL,” Carr said Wednesday. “But for us, we’ve been doing this for the last 13 years. Whether it was in college, or (training) together in the Bay Area, (and) doing it for months here at the facility. To us, it’s back to normal. But I think for everyone else, the excitement. ... I’m sure I’ll throw him the ball and he’ll get a catch or whatever and everyone will be like, ‘Oh my gosh, here we go.’

To the Raiders, it’s more like the next era.

While Carr still has his top targets from the past three seasons — slot receiver Hunter Renfrow and tight end Darren Waller — the offense could be completely different with the addition of arguably the best receiver in the game.

“We’ve been working for a while, we’ve been working longer than anybody at this point, started almost the beginning of April, so it’s definitely going to be fun to see all the work we put in kind of get put together as a masterpiece,” Adams said. “Obviously we’ve got a lot of great personnel but nothing’s promised. We haven’t been together, all the ones out there together yet, so it’ll be fun. We’ve been doing a lot of good in practice now so it’s just time to put it all together.”

Adams has impressed his new teammates.

“Tae definitely sets the standard as far as playmaking,” Waller said. “I’ve never seen anything like him. He raises our level of play. And if they want to do absurd things to take him out of the game, then a lot of us are gonna do our job as we always do.”

For Adams, nothing has changed about his college quarterback, who finished fifth in the NFL last season with 4,804 yards passing and a 64.8% completion rate.

“Derek is one of the most consistent, disciplined people that I’ve been around,” Adams said. “A lot of what I see now, or basically all of what I see now, is what I saw just at a lower level at Fresno obviously. He’s been the same way with the same things — if we don’t hit on a route in practice, as soon as we have a down period or during special teams, he wants to try to re-hit the same thing.”

Adams added that transitioning from Aaron Rodgers in Green Bay to Carr in Las Vegas has been smooth because they have they both have the same ability to make him play to their standards.

“I’ve obviously had some opportunities to show the coaches and the rest of my teammates what I can do. I’m just a piece of this offense. I’m definitely excited to see the way I’ll be used,” Adams said.

Carr stressed the importance of his role in bringing the offensive scheme together and giving ample targets to his talented pass-catchers.

“I’m just excited to start the season,” Carr said. “Whatever we do in the first game, we’re gonna go watch film, make corrections, and try and get better as the year goes. There’s no certain expectation, we just expect to play good football, sound football.”

NOTES: The Raiders reported a clean bill of health on the team’s first injury report.