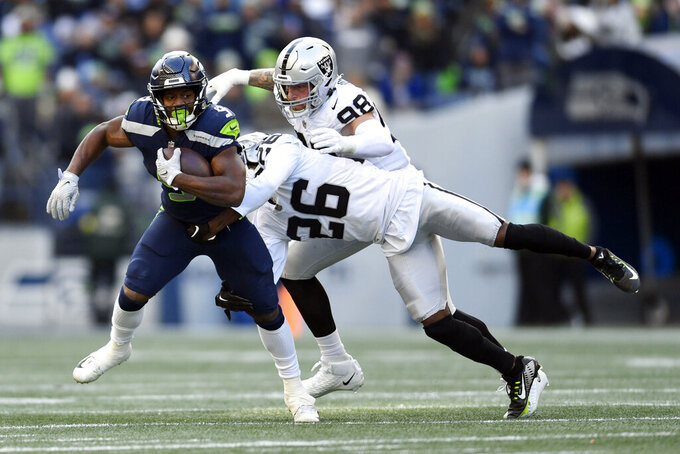 HENDERSON, Nev. (AP) — The signs are starting to show that maybe end Maxx Crosby isn't the only defensive lineman the Raiders can count on.

Las Vegas began to improve up front on Nov. 20 against the Denver Broncos, but then in Sunday's 40-34 victory at Seattle, its linemen took a noticeable step forward.

Tackles Andrew Billings and Bilal Nichols combined for 1 1/2 sacks of the Seahawks' Geno Smith and hit him three more times. They also were instrumental in holding the Seahawks to 65 yards rushing.

Now the question is whether the line can maintain its level of play from those two games.

“The better we do, the better the edge does,” Billings said. “So if we get that middle push, the quarterback can't step up. If Maxx misses him and we're there, we can get the sack ourselves.”

Signing tackle Jerry Tillery two weeks ago has helped the interior line's progress because it has allowed Billings and Nichols to reduce their number of snaps. And because Tillery is able to pressure quarterbacks, offenses have had to pay attention to him, which has freed up Nichols more often.

Las Vegas hoped to develop a strong 1-2 pass-rushing punch at end with the acquisition of Chandler Jones, but he has just half a sack. Instead, Crosby is getting more help from the tackles.

“There's got to be everybody on the same page to have an effective rush,” Crosby said. “Guys are getting better and better. It's been awesome to see.”

The Raiders had three sacks each of the past two weeks after reaching that number just twice through the first nine games.

Against Seattle, the Raiders got pressure at the most critical times.

Crosby sacked Smith on third down during a key fourth-quarter drive. Then in overtime, pressure by Crosby forced an incomplete pass on third down.

“Coach (McDaniels) made a big emphasis for Seattle in terms of let’s get in the middle of the pocket and get in Geno’s face,” defensive coordinator Patrick Graham said. “Those guys went out and executed one of the musts for the game. Wasn’t every play, but we had enough plays where they were in Geno’s face, and that’s one of the musts that coach identified that we needed to do to win the game. And as you can see, two weeks in a row, guys are trying to hit the musts as much as possible, and we were able to execute it.”

And for two weeks in a row, the defense improved against the run, holding Denver and Seattle to less than 100 yards and fewer than 4 yards per carry. Las Vegas held only other other opponent under 4 yards an attempt — the Los Angeles Chargers in the season opener.

The Raiders face the Chargers again Sunday, and the key is whether this two-week improvement is a trend and something to build upon or a one-off.

“As I’ve said before, those guys are all learning how to play with one another, whether it’s the four of them in a pass rush or a game on one side or another,” McDaniels said. “That’s something that we keep working on because I think we can make progress in that area.”

Cornerback Nate Hobbs sat in front of his locker Wednesday with a cast on his broken left hand. Hobbs, who was injured Oct. 10 at Kansas City, anticipates returning this weekend and playing with the cast.

“It's made me really antsy to play, watching my teammates every week go out there and lay it on the line,” Hobbs said. “So I'm grateful I've got another opportunity.”