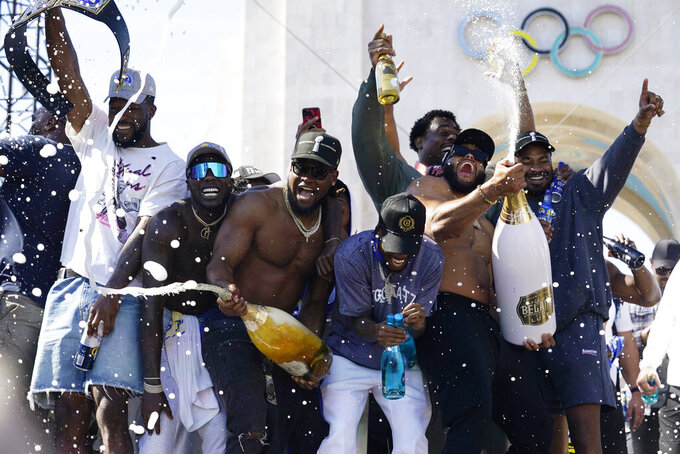 LOS ANGELES (AP) — Matthew Stafford, Cooper Kupp, Aaron Donald and the rest of the Los Angeles Rams celebrated their Super Bowl championship Wednesday with a victory parade and rollicking rally where they told thousands of cheering fans they would try to “run it back” and win again next year.

Fans lined sidewalks along the mile-long parade route as team members passed around the Lombardi Trophy, chugged champagne and waved from open-top double-decker buses that rolled to a plaza outside Los Angeles Memorial Coliseum.

Awaiting them was a sea of yellow and blue, a throng of supporters waving flags and decked out in Rams gear.

“It’s a testament to this team and the guys that are standing up here, the work that we put in, that we were able to bring this back to this city that demands nothing less than a world championship," said game MVP Kupp, who wore a Kobe Bryant Lakers jersey.

Responding to chants of “Run it back!” Kupp said he thinks the team can repeat next season.

“I really believe it. This is just the start," he said.

His teammates puffed cigars and sprayed bubbly from magnum bottles in a loosely organized party atop a crowded stage covered in confetti.

“I’ve been having a lot of fun ... so if I slur my words, I apologize,” laughed crowd favorite Donald, who was shirtless and slugged champagne. "Look at this trophy right here! Look at it! That’s what it’s all about!”

“It's an unbelievable journey we've been on,” said Stafford.

Fans came from all over the region to celebrate, with some arriving hours early to take in the scene. Cars on LA freeways flew Rams flags, and residences and businesses throughout downtown displayed banners congratulating the team.

“It’s like a dream,” said Lawrence Morse, who drove in from suburban Irwindale with his 12-year-old son, Jacob.

“We watched almost every game the whole season,” said Jacob. “We knew they would win the Super Bowl!”

The celebrating began Sunday when the Rams beat the Cincinnati Bengals 23-20 after a 79-yard final drive by Stafford that ended with a 1-yard TD toss to Kupp.

Charles Goolsby, 16, came with his two brothers and their father from Fontana, in San Bernardino County. He said his late grandfather was a lifelong Rams fan, and his passion for the team was contagious.

“I was holding my breath in the fourth quarter, but I just knew that Kupp could win it,” Goolsby said.

“We are here for our grandpa,” he added.

Three LA sports teams have won championships in the past two years, but the Lakers and Dodgers didn’t get victory parades because of the COVID-19 pandemic. The Rams' party came the same day that Los Angeles County lifted its outdoor mask mandate as coronavirus case rates and hospitalizations continue to fall.

“The sun is shining, the Rams won, the pandemic seems to be easing. What a day!” exclaimed fan Gregg Donovan, who wore a top hat emblazoned with “Rams House.”

The Coliseum was for decades home to the Rams, who now compete at SoFi Stadium in neighboring Inglewood, where the Super Bowl was played. Inglewood Mayor James T. Butts Jr. was on hand Wednesday to give the key to his city to team owner Stan Kroenke.

Rudy Gallego, 70, said he saw his first Rams game when his dad brought him to the Coliseum in the 1960s.

“They tore my heart out” when the team moved to St. Louis, he said, but his cousin persuaded him to resume his fandom when the Rams returned to LA. Gallego said it was like regaining a relationship with a long lost friend.