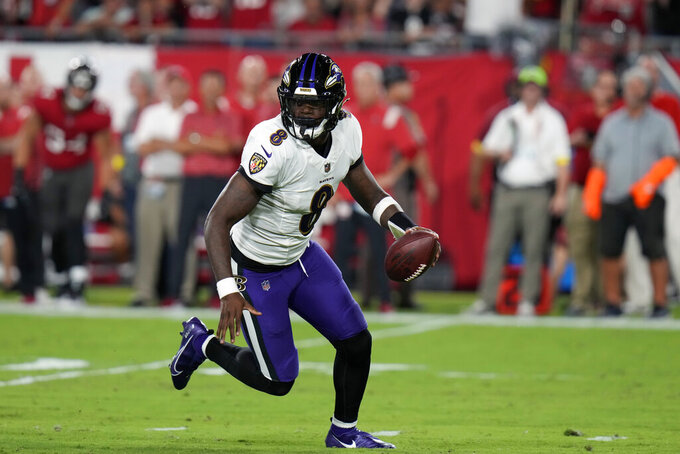 Yet first-year coach Dennis Allen’s chances of salvaging this campaign rose considerably last week with a dominant, shutout victory that harkened back to the Saints squads that made four straight playoff appearances from 2017 to 2020.

“Now the goal is to try to duplicate that,” Allen said as New Orleans (3-5) headed into a major Monday night test against the well-rested Baltimore Ravens (5-3), who are trying to maintain their hold on first place in the AFC North.

Still two games below .500 — but just one game out of first in an NFC South that has been rife with mediocrity — the Saints have been cautious about making too much out of one exceptional performance.

“It was good because that was on par with who we are and what we’re capable of doing,” Saints linebacker and defensive captain Demario Davis said. "But there’s still more out there and we’ve got to get it.”

The Ravens helped the Saints in Week 8, knocking off Tampa Bay in a Thursday night game. They've since had extra days to come up with ways to attack New Orleans.

“Obviously, they’re coming off a big win against the Raiders — a dominant win,” Raven coach John Harbaugh said of the Saints. “So, that’s an excellent football team.”

But the Saints have struggled against dual-threat QBs. They narrowly won in Atlanta, where Marcus Mariota's mobility gave them fits. They had trouble with Kyler Murray in a loss at Arizona.

Now comes Baltimore's Lamar Jackson, who leads the Ravens with 553 yards and two rushing TDs, including a 79-yarder.

“You're not going to meet too many quarterbacks that run like Lamar,” Saints defensive end Cameron Jordan said. “He's a pain to play.”

Jackson also has passed for 1,635 yards and 15 TDs with six interceptions, but will have to play without one of his most explosive receivers after Rashod Bateman was placed on injured reserve Thursday.

Saints quarterback Andy Dalton doesn't scramble much, but has been distributing the ball quickly and effectively — particularly to dynamic star running back Alvin Kamara. The Saints have averaged better than 400 yards of offense during Dalton's five starts.

That's no surprise to Harbaugh, who saw Dalton often when he was Cincinnati's starting QB.

“Very steady quarterback. He’s capable in so many ways,” Harbaugh said. "They have a lot of good players around him, but we have all the respect in the world for Andy Dalton. He’s made a big difference in their offense.”

The Ravens’ running game looks elite as usual, thanks in large part to Jackson’s contributions. The passing attack, on the other hand, is sort of just getting by.

Bateman caught touchdown passes of 55 and 75 yards in the first two weeks before being hampered by his foot injury. But those are the only two Ravens receptions all season beyond 35 yards.

Receiver Devin Duvernay has contributed, while tight ends Mark Andrews – himself limited by shoulder problems – and Isaiah Likely have been solid. But they aren’t necessarily deep threats.

Baltimore signed DeSean Jackson to its practice squad, and he could be active in New Orleans.

Baltimore traded for linebacker Roquan Smith before the deadline, adding him to a defense that has had 15 sacks in the past four games.

The Saints haven't had a chance to see how Baltimore might deploy Smith. Dalton, who spent last season with the Bears, could only joke that he “got to see him all last year in Chicago."

Dalton said Kamara's ability to recognize how teams are trying to defend him and communicate about possible adjustments figure into why the star running back has 100-plus scrimmage yards in each of his past four games.

“When you can have that communication then it translates in the games into big plays," Dalton said, referring to Kamara's TD catches of 36 and 16 yards last week. “He does a great job of understanding how people have played him. He can take the experience of that and apply it to what’s going on in that moment.”

The Saints, who've played their past five games without former All-Pro receiver Michael Thomas, learned this week that he's expected to miss the rest of the season with his toe injury. He's having surgery and going on injured reserve.

Thomas has been out since before Dalton took over as starter for Jameis Winston in Week 4.

“It would be harder if Mike was out here and all of a sudden we lost him," Dalton said.

“Obviously, it’s going to take a game or two for them to really get their feet under them and stuff, but after that, we’re going to be rolling,” linebacker Patrick Queen said.

But the loss of Bateman is a blow to the Ravens offense, and running back Gus Edwards (hamstring) has been day to day.