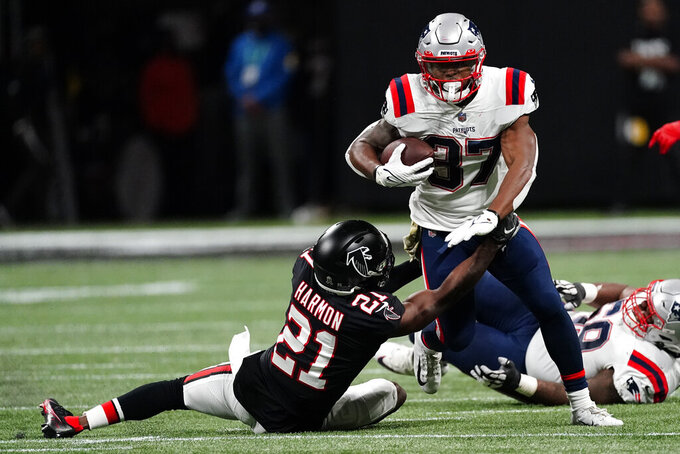 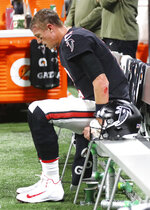 OPENING LINE: Falcons by 1, according to FanDuel Sportsbook.

AGAINST THE SPREAD: Atlanta 4-6; Jacksonville 4-6.

TURNOVER DIFFERENTIAL: Falcons minus-8; Jaguars minus-12.

FALCONS PLAYER TO WATCH: Rookie TE Kyle Pitts has 43 receptions for 635 yards and a touchdown. He played at nearby Florida and was so good that first-year Jaguars coach Urban Meyer joked about wanting to trade up and pair Pitts with Clemson QB Trevor Lawrence. Pitts has played twice at TIAA Bank Field, getting on the field in 2019 and 2020 for the Georgia-Florida game. He was knocked out of last year’s game on a brutal hit that twisted his helmet sideways and left him with a concussion and a broken nose.

JAGUARS PLAYER TO WATCH: DE Josh Allen is one of two NFL players with at least one sack, one interception and one forced fumble over the last three weeks. New England’s Kyle Van Noy is the other. Allen had a career-high 10 tackles last week against San Francisco.

KEY MATCHUP: Jaguars RB James Robinson versus Atlanta’s porous run defense. Despite playing through knee and heel injuries, Robinson has scored in consecutive weeks and remains the key to Jacksonville’s struggling offense. The Falcons have allowed 100 yards on the ground in five consecutive weeks and eight times in 10 games this season.

KEY INJURIES: Falcons RB/WR Cordarrelle Patterson missed last week’s game with a sore ankle but is expected to play. WR Calvin Ridley is expected to miss his fifth straight game while dealing with mental health issues. … The Jaguars lost WR/KR Jamal Agnew for the season with a hip injury. CBs Shaquill Griffin (concussion), CB Tyson Campbell (shoulder) and S Andre Cisco (groin) are dealing with injuries that could affect their availability against the Falcons. The Jaguars hope to get back C Brandon Linder and TE James O’Shaughnessy from injured reserve soon, maybe even this week.

SERIES NOTES: The Falcons have won three straight in the series, slightly more than doubling Jacksonville on the scoreboard in those games. The most recent loss is part of the Jaguars’ worst stretch in franchise history against the NFC. Jacksonville has lost 14 consecutive games against the other conference, including 0-3 this season, and is 7-44 in their last 51 games versus the NFC. The last win versus the NFC came in the 2018 season opener at the New York Giants.

STATS AND STUFF: The Falcons have been outscored 68-3 in consecutive losses. They have gone 130-plus minutes and 26 offensive possessions without a touchdown. ... Last week’s 25-0 loss to New England was the first time Atlanta was shut out at home since Oct. 9, 1988. ... The Falcons have gone consecutive games without a touchdown for the first time since 1987. ... Patterson is Atlanta’s leading rusher with 303 yards and its second-leading receiver with 473 yards and has scored seven TDs. ... The Falcons were 3 for 22 on third downs and 1 for 4 on fourth downs in their last two games. ... QB Matt Ryan has thrown two interceptions in each of the last two games. ... Atlanta’s defense is last in the NFL with 11 sacks. … Jaguars QB Lawrence doesn’t have an interception in three consecutive starts. … RB Robinson has scored in four consecutive home games. He has seven rushing TDs this season, joining Maurice Jones-Drew as the only players in franchise history with seven or more rushing TDs in their first two seasons.

FANTASY TIP: Pitts and Robinson are must starts. Be careful starting anyone else in this snoozer.