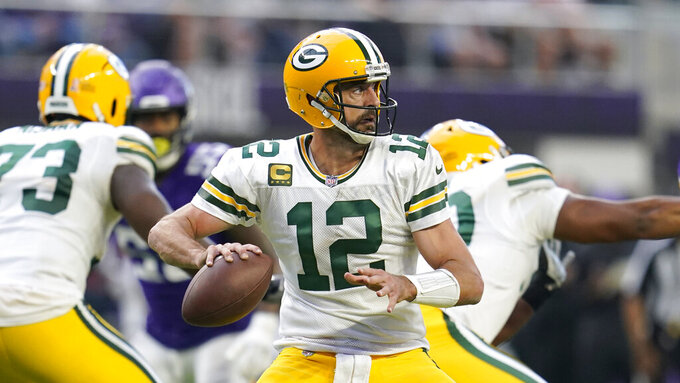 Green Bay Packers quarterback Aaron Rodgers (12) throws a pass during the second half of an NFL football game against the Minnesota Vikings, Sunday, Sept. 11, 2022, in Minneapolis. (AP Photo/Abbie Parr)

The ball arrived in stride, but it slipped between Watson's hands and fell softly to the turf.

What looked to be a too-good-to-be-true start to his career became, in a split second, a tough lesson in focus for a high draft pick in a high-pressure role as a target for the four-time league MVP.

The play that might well have caused loud groans from basements and bars across Wisconsin audible in the neighboring state also served as an example of the challenge that awaits Rodgers and the Packers this season without Davante Adams to lean on.

“We knew there was going to be growing pains. This is the real football. It counts. It’s different. There’s nerves," Rodgers said after the 23-7 loss to the Minnesota Vikings on Sunday. “I thought Christian ran a great route to start the game. We talked about it during the week: ‘Do you really want to start off with a bomb shot?’ I said, ‘Yeah, what the hell, why not? This kid can really fly. Let’s give him a chance.’”

Watson, the second-rounder from North Dakota State who was taken 34th overall with the pick the Packers traded up for in a rare swap with the Vikings, caught two passes for 34 yards and gained 7 yards on a reverse. Those plays were hardly memorable. The drop, unfortunately, was.

“You don’t know how many more you’re going to have, but you’re assuming there’s going to be a lot more obviously,” Watson said. “It’s a play I know I can make. I can go forward knowing I’ve made that play 100 times in the past and I’m going to make it next time it comes my way.”

With Watson and fellow rookie Romeo Doubs, a fourth-round pick from Nevada, the Packers have plenty of potential for production at the position, especially when Allen Lazard is cleared from the ankle injury that kept him out Sunday. Veterans Randall Cobb and Sammy Watkins are trustworthy options, at least, even if they aren't game-changers at this stage of their careers.

But, overall, this is a unproven group after the offseason trade that sent Adams to Las Vegas. Marquez Valdes-Scantling also signed with Kansas City, and Equanimeous St. Brown went to Chicago.

“Look, we’ve got to have patience with those guys. They’re young. They haven’t been in the fire," said Rodgers, who went 22 for 34 for 195 yards with one interception and one lost fumble. "The patience will be thinner as the season goes on, but the expectation will be high. We’ll keep them accountable, but it’s going to happen. There’s going to be drops. Hate to see it on the first play, but it’s part of it.”

Rodgers has never been shy about voicing his opinion about coaching decisions and game plans, and he said afterward there weren't enough passing plays called for the outside of the field. Running backs Aaron Jones and A.J. Dillon will factor heavily in that area.

Green Bay's best possession of the game was a 10-play, 79-yard drive in the second quarter when Minnesota only led 7-0. Rodgers tellingly went 5 for 5 for 63 yards throwing to Jones, Dillon and tight end Robert Tonyan.

Last year, the Packers deftly rebounded from a 38-3 defeat by New Orleans in the season opener, going 13-4 and getting the No. 1 seed for the NFC playoffs, but a repeat will require some new wide receivers to quickly emerge in rhythm with Rodgers. His return for an 18th year in the NFL, his 15th as the starter, might be one of his toughest jobs yet.

“I think we’re in a great spot right now. I think it’s something that’ll continue to build as we have more and more success and more and more opportunities,” Watson said. “We can’t change anything now. It’s the past, obviously. We’re just looking forward. We know what the standard is and the things we’re trying to achieve.”