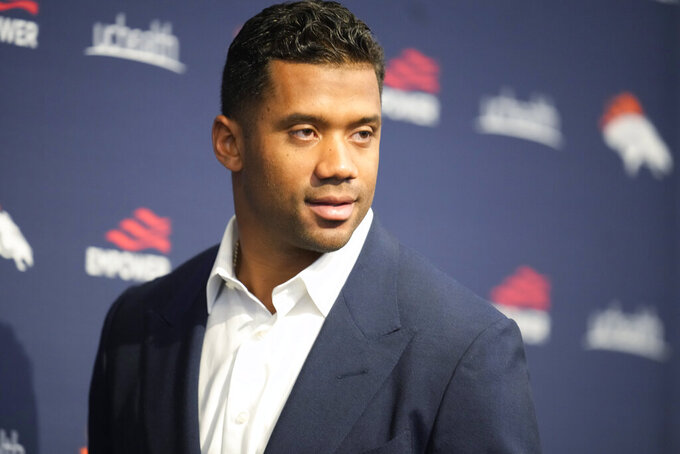 OPENING LINE: Broncos by 6.5, according to FanDuel SportsBook.

TURNOVER DIFFERENTIAL: Broncos plus-1; Seahawks plus-3.

BRONCOS PLAYER TO WATCH: QB Russell Wilson makes his return to Seattle following a decade as the Seahawks starting quarterback and his offseason trade to the Broncos. The reception he receives will be one major question. So too will be how the Broncos offense looks with him in charge and under first-year head coach Nathanial Hackett. Wilson didn’t take a snap in the preseason.

SEAHAWKS PLAYER TO WATCH: For the first time since 2014 Geno Smith begins the season as a starting quarterback. He waited behind Wilson as the backup and never saw the field until Wilson suffered a finger injury last season. That gave Smith another taste of being a starter and he outplayed Drew Lock during the offseason and training camp by making fewer mistakes. The job is Smith’s to start the season although any faltering could open the door for Lock.

KEY MATCHUP: Broncos OL vs. Seahawks pass rush. If Wilson is to succeed in Denver, he must stay upright, which was one of his ongoing complaints in Seattle. Denver’s offensive line will be tested by a bolstered Seattle pass rush with burgeoning star Darrell Taylor and safety Jamal Adams the biggest headaches the Broncos will have to deal with.

KEY INJURIES: RT Billy Turner missed most of the offseason program recuperating from knee surgery and it’s likely Calvin Anderson gets the start in his place. Rookie TE Greg Dulcich has been dealing with a pulled hamstring, a common ailment for newcomers at altitude. Rookie Seattle RB Ken Walker III is not expected to play after undergoing surgery for a hernia last month. CB Artie Burns was expected to be a starter, but has been slowed by a groin injury and may not be ready to play.

SERIES NOTES: The teams haven’t met since 2018 when the Broncos pulled out a 27-24 win in Denver. Seattle had won the previous two matchups, including the most memorable in the history of the former AFC West rivals when the Seahawks beat the Broncos in Super Bowl 48.

STATS AND STUFF: Wilson will join a select group of quarterbacks to start against the team that they made 150 or more starts against. The previous ones were Tom Brady vs. New England; Brett Favre vs. Green Bay; Peyton Manning vs. Indianapolis; and Matthew Stafford vs. Detroit. ... Wilson is 10-3 on MNF with 25 TDs and five interceptions. ... RB Javonte Williams ranked third among rookies with 1,219 scrimmage yards and 903 rushing yards last season. His seven TDs tied for third most among rookie running backs. ... Since 2015, Melvin Gordon ranks second among the league’s running backs with 8,388 scrimmage yards and is fourth with 67 touchdowns. ... CB Patrick Surtain II led all rookies with four interceptions last season and he led the Broncos with 14 pass breakups. ... OLB Randy Gregory, the gem of GM George Paton’s free agent class, makes his Denver debut Monday night. He had six sacks and forced three fumbles for Dallas last season. ... Denver S Justin Simmons and Seattle S Quandre Diggs are the only two safeties with five or more interceptions each of the past two seasons. ... Geno Smith had a 103.0 passer rating and threw five touchdowns with just one interception in his playing time last season. But Seattle was just 1-2 in the three games Smith started. ... RB Rashaad Penny averaged 134.2 yards rushing and had six rushing touchdowns over the final five games of last season. ... WR DK Metcalf led Seattle with 75 receptions and had a career-high 12 touchdowns last season. He signed a three-year contract extension worth up to $72 million this offseason. ... Seahawks TE Noah Fant had a career-high 68 receptions last season for Denver and is expected to be Smith’s primary target in the middle of the field. ... Seattle LB Jordyn Brooks takes over at middle linebacker after finishing second in the league with 183 tackles last season. ... S Jamal Adams makes his return after missing the final five games of last season with a shoulder injury.

FANTASY TIP: It seems as if Wilson should be poised for a big game in his return and Seattle is likely to be starting at least one rookie at cornerback. Wilson has thrown four touchdown passes in Week 1 in each of the past two seasons.