Sagging Titans back to work, currently outside playoff spot 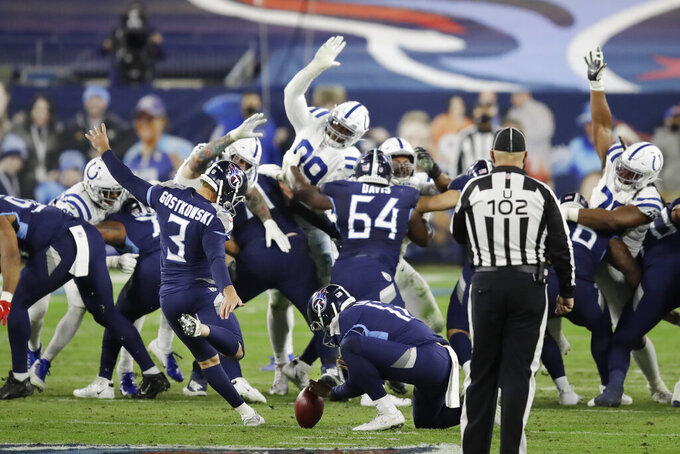 NASHVILLE, Tenn. (AP) — Not only have the Tennessee Titans lost three of their past four games, they returned to work Monday among six AFC teams with 6-3 records.

They're also the first team out looking in at the AFC's playoff picture.

It's not what the Titans expected after winning their first five games this season. Following up their first AFC championship game appearance in 17 years by winning the AFC South for the first time since 2008 also has become a bigger challenge now that Tennessee has surrendered the top spot in the division to Indianapolis.

Coach Mike Vrabel isn't looking at the big picture. He said the Titans' challenge now is just getting one win.

“This is what it looks like every year,” Vrabel said. “A lot of teams are bunched up just like they were last year. We’re trying to win a game. We’re trying to put our head down. We’re trying to focus on continuing to improve at this point in the season, knowing that teams go in different directions. We need to improve.”

Vrabel and his assistants spent Monday working on fundamentals and looking at what the Titans must do better.

It's a long list, and special teams has moved near the top. The Titans have used a different punter in each of the past three games, two after three-time Pro Bowler Brett Kern wound up on injured reserve. Protection has been an issue as well, with a punt blocked and returned for a touchdown in the Titans' 34-17 loss to the Colts on Thursday night.

It's got the Titans talking about using starters on special teams to help shore up some of the weaknesses.

“I think we have to have all hands on deck,” Vrabel said. “Having played, I try to not ask them to do things that I wasn’t asked to do. I know we have some guys that have some snap counts that are getting up there, but if we need that, that’s always something that we should be able to do.”

Stephen Gostkowski missed another field-goal attempt in that last loss, which cost Tennessee the top spot in the division. He's 12 of 20 on field goals this season, a 60% conversion rate that's easily the worst of the four-time Pro Bowler's career.

The Titans added kicker Giorgio Tavecchio to the practice squad last week, and Vrabel didn't exactly give Gostkowski a strong vote of confidence.

“As of Monday at 10:36, Stephen would be our kicker as of right now,” Vrabel told reporters.

The Titans have slipped to 10th in scoring at 27.7 points a game. They rank 29th in time of possession, but Derrick Henry remains the NFL rushing leader, just 54 yards from his third straight 1,000 yard season as he tries to defend his rushing title.

The Titans are playing their next two games on the road starting Sunday at Baltimore (6-3) with a rematch at Indianapolis on Nov. 29. Tennessee went 5-3 on the road last season. Vrabel said that's going to have to remain a strength, but all of his focus is on the Ravens.

“We’ve got to be excited about coming back to work, being in the middle of the season where we are giving ourselves a chance and being ready to get back to work,” Vrabel said.