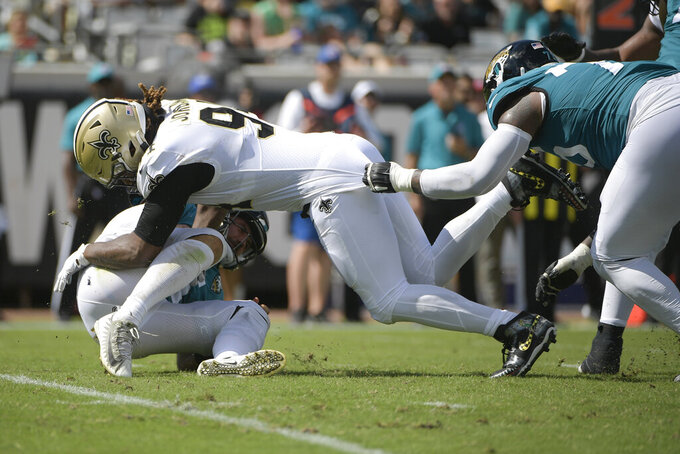 NEW ORLEANS (AP) — With Drew Brees sidelined, the defense has become the must-see unit for the New Orleans Saints.

That's lowered pressure on a Saints offense operating without their record-setting quarterback, and offensive tackle Terron Armstead is loving every minute of it.

"I just see those guys locked in, focused on the small things," Armstead said a day after New Orleans limited Jacksonville to two field goals in a 13-6 road victory . "Communication has been a big emphasis, and it's been excellent for them these past few weeks. They're playing really well together."

The Saints improved to 4-0 behind backup quarterback Teddy Bridgewater while Brees recovers from a Week 2 thumb injury. The defense has been dominant in the last three games, holding the Jaguars to a season-low 226 yards after doing the same thing to Tampa Bay (252 yards) and Dallas (257 yards). Jacksonville became the second team in three weeks to be held to 10 or fewer points by the Saints, who held the Cowboys to 10 in Week 4 .

Setting the tone right away against Jacksonville, rookie safety Chauncey Gardner-Johnson tackled running back Leonard Fournette in the open field a yard shy of a first down on the Jaguars' opening possession, forcing a punt. Not much changed the rest of the day.

Aside from its two field-goal drives, Jacksonville had only two snaps across midfield. One of them ended with offensive holding. The other was an incomplete pass on fourth down from rookie quarterback Gardner Minshew, who finished 14 of 29 for 163 yards.

"We just come into the week and whatever our goals are, we try to go in and execute the game plan and just get the job done," defensive tackle Malcom Brown said. "At the end of the day, we look at the scoreboard and see where we're at."

New Orleans (5-1) is in first place in the NFC South, a game ahead of Carolina. While the offense put up big numbers against Tampa Bay in Week 5, the playmaking defense has been more consistent.

Cornerback Marshon Lattimore intercepted a pass early in the third quarter — Minshew's first since becoming a starter in Week 2. Lattimore also broke up two more passes, slapping the ball away to force a punt on what wound up being Jacksonville's last offensive snap.

Shadowing DJ Chark, the AFC's leading receiver, Lattimore held him to three catches for 43 yards — 54 below his average. This came after Lattimore limited Tampa Bay's Mike Evans without a catch and Dallas' Amari Cooper to a long reception of 14 yards.

"He's hit a stretch here where he's playing some of his best football," Saints coach Sean Payton said. "He's played exceptionally well prior to this year, but he's drawn some tough assignments and is playing very well."

The Saints held Fournette to 72 yards on 20 carries, extending their streak without allowing a 100-yard rusher to 32, including playoff games.

New Orleans also sacked Minshew three times. End Cameron Jordan had two, including one on third down that forced the Jaguars to settle for their second field goal when they were inside the Saints 10.

Jordan's five sacks lead the team, but seven linemen have a least one.

"We've got so many guys," Brown said. "The talent doesn't fall off and everybody is playing hard. We can go four quarters fresh and have everybody rotate in, trying to do the job fast and physical."

If this keeps up, how daunting an opponent could the Saints become after Brees' anticipated mid-season return?

Saints kickers are special almost every week. Thomas Morstead pinned the Jaguars at their 9, 2, 15, 14 and 11 among his six punts. Wil Lutz hit field goals of 47 and 21 yards, extending his streak of made field goals on the road to 34.

The receiver group needs production from more players. All-Pro receiver Mike Thomas and veteran Ted Ginn Jr. are the only wideouts with a catch in Bridgewater's four games as starter. With 2018 first-round pick Tre'Quan Smith sidelined by an ankle injury, the Saints have not found another reliable option at that position.

Latavius Murray had his best game since signing with New Orleans around the same time Mark Ingram left in free agency. Murray rushed eight times for 44 yards and caught three passes for 35 yards. His receiving numbers would have been better if his 42-yard touchdown on a screen had not been wiped out by a holding penalty.

Bridgewater left points on the field, underthrowing Ginn deep when he was wide open for a would-be touchdown and misfiring on several other passes. The same mistakes could cost the Saints down the road against a better opponent.

Kamara, who entered with a swollen ankle, tweaked a knee early. Although he continued playing, he was less effective as normal, finishing with 31 yards on 11 carries and catching seven passes for 35 yards.

18 — The Saints have won 18 consecutive regular-season games when leading at any point in the fourth quarter. That success has not extended to the playoffs, though, where their losses in the last two years came after fourth-quarter leads.

The Saints face the Bears' top-notch defense in Chicago, then host to Arizona before their bye.