Saints sticking with Dalton over Winston vs. Raiders 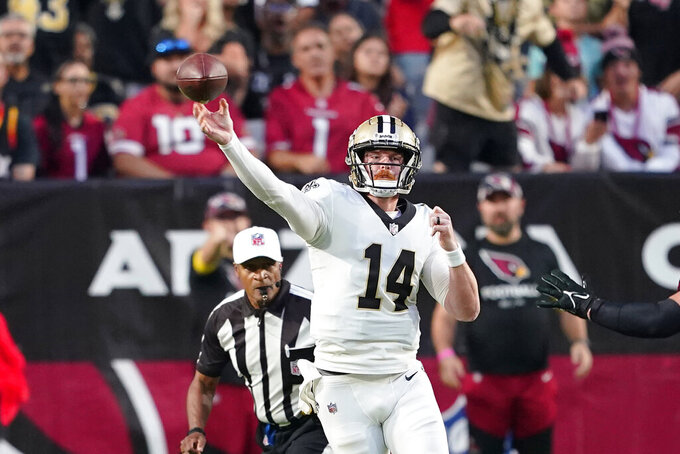 “Offensively, I feel like we’re in a little bit of a rhythm,” Allen said Wednesday after noting that Winston, who has been recovering from back and ankle injuries, was healthy enough to participate fully in practice.

“We’ve been moving the ball effectively. We’ve scored points," Allen continued. "So, we’re going to continue down that road with Andy.”

New Orleans (2-5) has lost five of six games and dropped two straight. But as the Saints prepare to host the Las Vegas Raiders on Sunday, they're just one game out of first place in the NFC South — a division in which every team has a losing record.

The Saints have averaged 31 points per game during Dalton's four starts after averaging 17 points in Winston's three starts.

And while Dalton threw three interceptions in a 42-34 loss at Arizona last week, one of those passes went through the hands, and off the helmet, of intended receiver Marquez Callaway. Another occurred on a throw in which Dalton was getting hit as he released the ball.

Neither Dalton who is 1-3 as a starter, nor Winston, who is 1-2, spoke with reporters after Wednesday's practice.

“We’ve been able to just kind of get into a good flow,” said running back and offensive captain Alvin Kamara, who's had 179 yards receiving and 251 yards rushing in the three games he's played with Dalton at quarterback.

“I think with Andy, he does a good job of just staying poised and being calm about the way he is in the pocket and the way he gets to his reads. I feel like he never panics,” Kamara said. “It seems like he gets to the right place at the right time. Minus some of the things we were doing that were self-inflicted, he’s played well. I think it’s going to be good moving forward.”

Saints rookie Chris Olave, who leads the team in receiving, had his season high of 147 yards receiving at Carolina in Winston's last of three starts to open the season. But he has continued to be productive in the three games he's played with Dalton, putting up 227 yards and both of his touchdowns this season in those games.

“They're both really good quarterbacks,” Olave said. “I know it's a tough decision.”

Olave said Dalton “gives the offense a lot of confidence."

“He’s poised back there. He’s confident. I feel like he does everything right," Olave said. "He knows where to throw the ball in certain coverages, he uses his check-downs, he doesn’t force the ball down the field.”

Winston, who won the Heisman Trophy and a college football national title with Florida State in the 2013 season, has completed 63.5% of his passes for 858 yards and four TDs vs. five interceptions this season.

Allen said the decision to stick with Dalton over a healthy Winston was not an easy one, “but yet, when you look at what we’ve been able to do statistically, we’re converting third downs, we’re scoring points, we’re moving the ball."

“There’s a lot of things that we’re doing really well offensively,” Allen added. "And I didn’t feel like there was any need to upset the apple cart there. We’ll keep going how we are.”