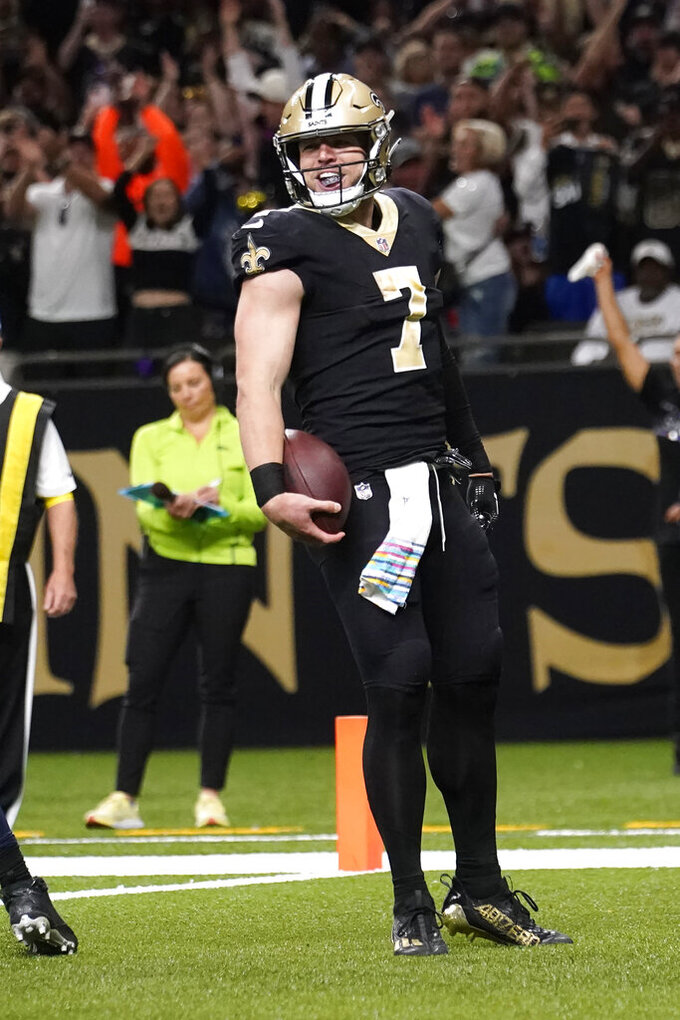 Is the Hill experiment at tight end being largely abandoned?

And after two solid starts by Dalton, would the Saints be inclined to stick with him even after season-opening starter Jameis Winston is healthy?

To this point, Hill has hardly resembled a tight end. In his four games played, he has one catch for 2 yards.

Meanwhile, he leads the team in rushing with 228 yards (on 21 carries, an average of 10.9 yards per carry) and TDs runs with five. He also has a perfect passer rating because the only pass he has thrown this season went for a 22-yard score to fellow tight end Adam Trautman on Sunday, when Hill also rushed for 112 yards and three TDs in a 39-32 victory.

On Monday, first-year Saints coach Dennis Allen said when his staff began talking about using Hill as an “F” tight end, or a tight end that acts more as a receiver than a blocker, “I kind of envisioned that role being very similar to the role that he's had here in the past.”

Hill previously was listed as a backup QB, but also played on special teams, subbed in periodically for designed QB runs and sometimes lined up as a receiver, as he does now.

“I think that'll continue,” Allen added. “I'd like to get him a little more involved in the passing game, but to this point we haven't been able to do that. ... In the meantime, there's a lot of things that he can do really well.”

As for Dalton, his passing statistics through two full games compare favorably to Winston's in his three starts this season — although it's not a huge sample size for either player.

“Obviously, the evaluation of Jameis is kind of an incomplete evaluation based on the fact that he was dealing with some injury issues,” Allen said.

“I do like what Andy's been able to do," Allen continued. "He's been efficient in terms of operating the offense. He's doing the things he was brought here to do, and that was, when called upon, go in there and execute and give us a chance to win. And there's been two games that we've had an opportunity to win.”

The running game, at least when Alvin Kamara and Hill are heavily involved. Each of them topped 100 yards against Seattle, and the Saints finished with 235 yards rushing as a team. They also rushed for a 2-point conversion in the fourth quarter, with Mark Ingram carrying.

“There's a lot of conversation about me right now," Hill said. "But man, when you can rush the ball for over 200 yards, those guys up front played very well against a really good defense.”

Allen said his defense has been “pretty good” at limiting big plays this season, “but we were not yesterday. ... We've got to get it fixed.”

Hill periodically has been a difference maker during Saints victories in recent seasons, but arguably never more so than against Seattle.

Returner Deonte Harty muffed a kickoff, recovered it and then tried to return it, only to be swarmed over at the Saints 11. Soon after, he left with a foot injury.

13 — The Saints' league-worst total of turnovers after committing two more against the Seahawks. New Orleans' turnover differential is minus-8, also worst in the NFL.

“The one black eye we had offensively (against Seattle) is we didn't do as good a job of protecting the football as we need to," Allen said.

The Saints remain home this week and host a Cincinnati team that is also 2-3 and will be hungry to bounce back from a loss Sunday night at Baltimore. It'll also be a homecoming of sorts for Bengals QB Joe Burrow, the LSU Heisman Trophy winner who memorably lit up a cigar after his last game in the Superdome, a national title triumph over Clemson.