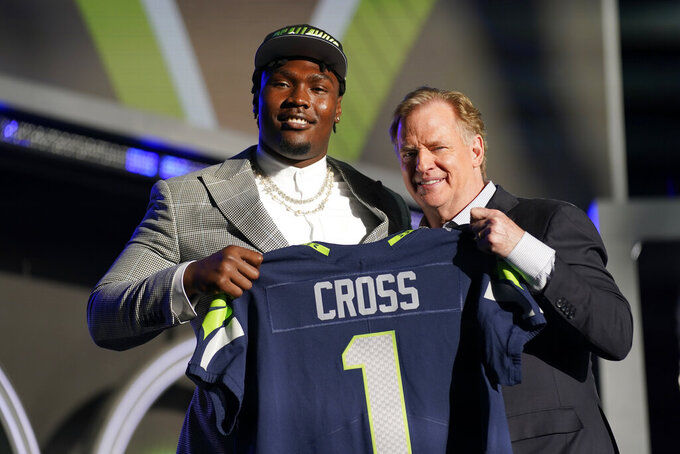 RENTON, Wash. (AP) — When general manager John Schneider and coach Pete Carroll arrived to lead the Seattle Seahawks a dozen years ago, their overhaul of the roster started with finding a left tackle.

They're hoping after an offseason of upheaval and more major roster changes that landing a new left tackle in Mississippi State's Charles Cross can help start another run of success.

"It's a great place to start when you're trying to build an offensive line, always,” Carroll said. “That left tackle spot is crucial in all of that.”

For just the second time in the Carroll era, the Seahawks had a top 10 selection Thursday night. And just like they did in 2010, the Seahawks used that top 10 pick on a left tackle.

A dozen years ago, it was Russell Okung with the No. 6 pick. This time, it was Cross at No. 9, a first-team All-Southeastern Conference selection last season after starting 12 games for the Bulldogs.

With good size and length at 6-foot-5, 310 pounds, Cross is considered by some scouts to be the best pass blocker in this draft, especially after playing in the pass-happy offensive scheme of Mississippi State coach Mike Leach the past two seasons. The Seahawks like to emphasize the run and probably will need Cross to be a quick learner as a run blocker.

“He’s such a good a good athlete and he has such a good brain that we feel like our coaches are going to be able to really help him out in terms of the quantity of the run game that's going to be placed on him,” Schneider said.

Left tackle was among Seattle's primary needs entering the draft due to uncertainty. Veteran Duane Brown is a free agent after spending the past 4½ seasons with the team, and the Seahawks seem hesitant to commit to a lengthy deal with him. Brown will turn 37 before the start of next season.

Cross said he had an interview with the Seahawks during the combine and a couple of phone conversations afterward. After seeing fellow left tackles Ikem Ekwonu and Evan Neal selected earlier in the draft, Cross had a feeling he could be headed to Seattle.

“I kind of expected it to be honest,” Cross said.

Schneider made clear one of the left tackles was the target and that had Cross not been available, the Seahawks may have made a deal to move back in the first round.

“He came to us and we feel pretty blessed that he was there,” Schneider said.

Seattle was initially without a first-round pick due to the trade for Jamal Adams before the start of the 2020 season. But the trade of Russell Wilson to Denver landed the Seahawks back in the first round and with a top 10 selection for the first time since 2010, when they took Okung.

Okung went on to start all 72 regular-season games he played for the Seahawks over six seasons, including Seattle's Super Bowl season.

Seattle is now hoping Cross can match what Okung accomplished.

“They're a physical organization. They preach physicality, toughness, nastiness. Really everything you need to do to be successful," Cross said. "I'm just excited for the opportunity (and) ready to get to work.”

Quarterback will remain a focus going forward for the Seahawks. Seattle seems set on giving Drew Lock, Geno Smith and Jacob Eason a chance at earning the starting job, though the team may select a QB later in the draft.

Pass rusher and cornerback are two other priority areas the Seahawks are expected to address. Seattle has the No. 40 and No. 41 picks in the second round on Friday.