Shanahan returns to face Redskins as coach of unbeaten 49ers 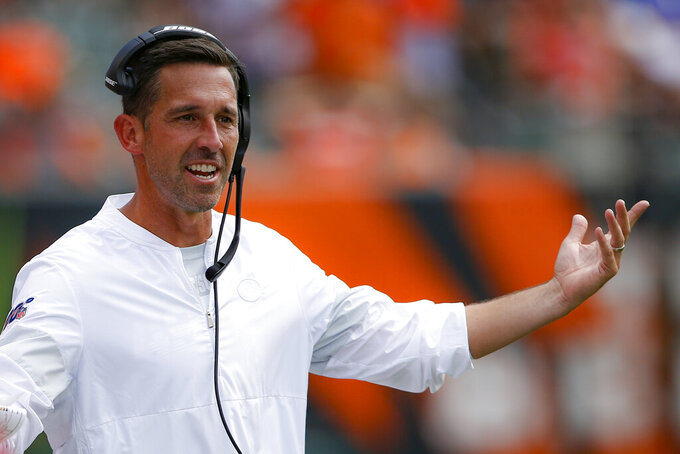 FILE - In this Sept. 15, 2019, file photo, San Francisco 49ers head coach Kyle Shanahan works the sideline during the second half an NFL football game against the Cincinnati Bengals in Cincinnati. Almost nothing has gone wrong for Shanahan and the unbeaten 49ers, who are in position to establish themselves as the favorite in the division that the Los Angeles Rams dominated since head coach Sean McVay’s arrival. (AP Photo/Gary Landers, )

After serving as the Washington Redskins' offensive coordinator under his dad, Mike Shanahan, from 2010-2013, he returns Sunday to face them as coach of the undefeated San Francisco 49ers.

Six years after the Shanahans were fired, the Dan Snyder-owned and Bruce Allen-run Redskins are about to embark on another coaching search. The position might be harder to fill if candidates go to Kyle for advice.

He said the best part of Washington was being able to work with his dad and be around some other good coaches. The worst part? "Everything else." The 49ers coach paused. "I liked a lot of the players — some good people," he said.

"We've accepted what we had to deal with there, and we've moved on," Shanahan said. "We'll watch other people deal with it."

Shanahan was one of three future NFL head coaches on the Redskins' staff in 2012 and 2013, along with Sean McVay and Matt LaFleur. McVay took the Rams to the Super Bowl last season, LaFleur is in his first season in charge of the Green Bay Packers, and the three coaches' teams have combined to go 13-4 this year.

Snyder and Allen fired Jay Gruden after the Redskins lost their first five games, and Washington eked out a 17-16 win at the hapless Miami Dolphins last week in interim coach Bill Callahan's debut. The 5-0 49ers look like justifiable double-digit favorites and are rolling under Shanahan, who has transformed the culture in San Francisco, in part because his time with the Redskins taught him what not to do.

"I just learned it's very important to work with people that have the same intentions and you want to go in the same direction," Shanahan said. "Football is a very tough game and no matter how close you are with people, there's adversity that faces everyone and when you lose one game, two games in a row, you know what's going to be written and everything and (if) people live off that type of stuff, it's very hard to survive and get through any tough times.

"So, you've got to make sure people are made of the same stuff you are, that have the same intention, same goals and they're ready to fight and work through things and see it to the end."

Shanahan, who coached a game with the Niners at FedEx Field two seasons ago, said his well-timed visit this time on Redskins alumni "Homecoming Weekend" is not personal. The only offensive players left from his time with Washington are injured running back Chris Thompson and holdout left tackle Trent Williams.

"I've moved on with my life in many other ways, and I think my family has also," Shanahan said. "It's not an issue. We've got our team coming to play their team and we're looking forward to that."

Shanahan has grown significantly from the introverted, closed-off offensive coordinator he was in Washington to now. Players then appreciated his football acumen, but more goes into being a head coach.

"As an OC in Washington, you saw kind of how smart he was, the way he saw the game," said Houston Texans tight end Logan Paulsen, who played for Shanahan in Washington and San Francisco.

"The thing that I thought that was really cool going from Washington to San Francisco was seeing his maturity in terms of talking and dealing with players and different personalities. He was always a very bright football guy and to see his leadership skills really come into his own was really cool to see."

Paulsen said Shanahan exercised patience waiting for the right opportunity to take a head job and "did it on his own time." With quarterback Jimmy Garoppolo running his offense and one of the best defenses in the league, Shanahan is an early front-runner for coach of the year.

"He is a football junkie, and I think guys really respect that," Paulsen said. "They see kind of the standard that's set by him in terms of what they need to know and how they need to respond in certain situations, and I think that's really special."

Washington's current offensive coordinator, Kevin O'Connell, could be the coach next season, and Steelers coach Mike Tomlin's name has been tossed around. Whoever interviews and gets offered the job, Shanahan doesn't expect to be asked for his thoughts on the organization.

"Just look into it, see what the situation is and who you want to work for," Shanahan said. "Any time you get opportunities you've got to look into it, but I'm not there and I don't know how it is right now. That would be up to that person. I'm probably not the person they want to call on that advice."

Some things to watch when Shanahan's 49ers visit the Redskins:

After going winless on the road last year, the Niners have been outstanding away from home so far this year. They opened the season with back-to-back wins at Tampa Bay and Cincinnati and then won 20-7 last week at Los Angeles against McVay and the defending NFC champion Rams. San Francisco hasn't had a winning record on the road since going 6-2 in 2013 on the way to the NFC title game.

"I know we didn't win a road game last season, preseason or regular season, so those plane rides weren't very fun," tight end George Kittle said. "Being able to get on those planes and come back with a victory makes it so much more fun."

Callahan promised to commit to the ground game after taking over for Gruden, and boy, did he. Adrian Peterson rushed 23 times for 118 yards at Miami.

"We'll do whatever we need to do," Callahan said. "Of course we want to establish the run and we want to keep that identity just like everybody else around the league, but they're good."

The Niners managed to win last week despite playing two backups at tackle. Rookie Justin Skule made his third straight start at left tackle in place of Joe Staley, while Daniel Brunskill got his first career start at right tackle in place of Mike McGlinchey. San Francisco was still able to move the ball fairly consistently without altering the offense too much.

"I thought the two rookies did a great job stepping in and filling their roles," Garoppolo said. "Those guys are just battling up front. What they do in the run game and pass game is so impressive."

Washington's Terry McLaurin is the first rookie with 50-plus yards receiving in each of his first five NFL games since Terry Glenn in 1996. McLaurin leads all rookies with 23 catches, 408 yards and five touchdowns and is already the Redskins' best offensive player.

"He's done a really good job for them stepping in as a rookie, which is rare for receivers," Shanahan said. "But you've got a very good football player and he's tough and the game's not too big."

San Francisco's defense has played at a high level all season but might have been at its best last week. The Niners are allowing a league-low 150.2 yards per game passing, and rank second in points allowed (12.8 per game) and total defense (237.4 yards per game) thanks to a dominant defensive line that has put heavy pressure on opposing passers. San Francisco allowed just 48 net yards passing last week against the Rams and held Los Angeles to no conversions on third or fourth down.