Skill and a little luck lead to Cardinals' winning streak 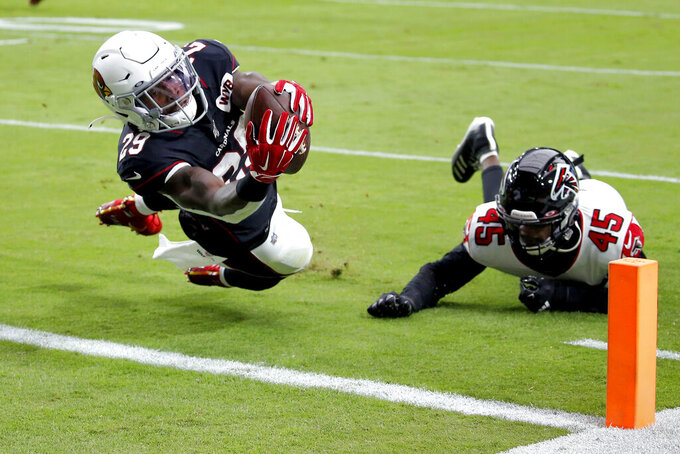 TEMPE, Ariz. (AP) — Arizona combined some good football with a little good fortune to earn a 34-33 victory on Sunday over the Atlanta Falcons.

Now the Cardinals have a two-game winning streak and the rebuilding franchise is rapidly gaining momentum going into next week's road game against the New York Giants.

Rookie quarterback Kyler Murray had another impressive performance against the Falcons, throwing for 340 yards and three touchdowns. David Johnson was his usual do-it-all self, scoring on a rushing touchdown and a passing touchdown.

The defense wasn't great, but did enough to win.

"I think guys are starting to understand what we can be if we play together as a team," coach Kliff Kingsbury said. "Hopefully we can take another step next week."

The Cardinals certainly won't apologize for Sunday's win, but there was acknowledgement all around that some luck was involved.

Then the biggest shocker: Falcons kicker Matt Bryant missed an extra point with 1:53 left that would have tied the game. He had missed just three extra points over the past 11 seasons before Sunday.

"All the games in the NFL are close," Cardinals offensive lineman Justin Pugh said. "We're lucky we got this one pulled out today and we have to build off it."

The Johnson/Chase Edmonds running back combo. Johnson's role in Arizona's offense continues to evolve and it has been productive. Even though he's a running back, Kingsbury said the fifth-year veteran is one of the most natural receivers on the team and it showed with a 14-yard touchdown catch in the fourth quarter.

Edmonds, a second-year pro, is smaller than Johnson but possesses the same sort of versatility. He caught a 2-yard touchdown pass against the Falcons.

The Cardinals' offense is particularly dangerous when both are on the field, and Kingsbury is working to make that happen more often.

The young secondary continues to give up a lot of yards. But there's good news this week: Elite cornerback Patrick Peterson returns to the Cardinals this week after a six-game suspension for violating the NFL's policy on performance enhancers.

Peterson joins a group of rookies — including cornerback Byron Murphy Jr. and safeties Deionte Thompson and Jalen Thompson — who have shown promise but will benefit greatly from Peterson's skills and leadership.

Kingsbury. The first-year coach has brought his version of the Air Raid to Arizona and so far, it has worked out well. Murray continues to get more comfortable in the offense, the Johnson/Edmonds combo is productive, and the playbook is full of creative misdirection and wrinkles that have produced yards and points.

Anyone covering opposing tight ends. One reason Peterson's return is so valuable is it gives the Cardinals more options to shuffle people around when covering tight ends. Falcons TE Austin Hooper was the latest to roast Arizona, catching eight passes for 117 yards and a touchdown.

The Cardinals continue to be a somewhat healthy team. The offense could be even more dangerous if WR Christian Kirk (ankle) is able to return against the Giants after missing two games.

4 - The Cardinals have turned the ball over just four times this season, which is tied for the fewest in the NFL this season. In wins over the Bengals and Falcons, Arizona had zero turnovers. The emphasis on ball security is impressive considering the team is playing with a rookie quarterback and several other young playmakers.