Smith does his job and Seattle now waits for Wilson's return 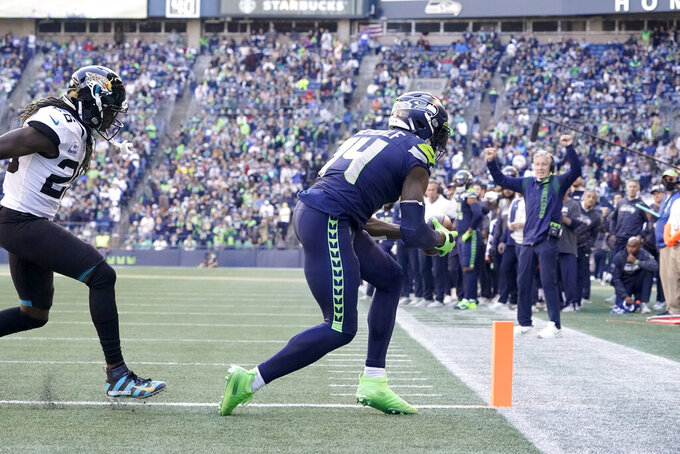 RENTON, Wash. (AP) — In the bigger picture of what he was being asked to do, Geno Smith did his job as a three-week starter at quarterback for the Seattle Seahawks.

He won the game he should be expected to when the Seahawks routed Jacksonville 31-7 on Sunday. He kept Seattle competitive in losses to Pittsburgh and New Orleans before making a few late mistakes, neither game the Seahawks were favored to win.

Smith served his role as the bridge between Russell Wilson undergoing finger surgery and the reality of when the Seahawks’ franchise QB may be able to return.

“I’m not trying to be arrogant or anything like that, but I’ve done it for a long time. You can pull up tape from 2014 of me doing the same thing,” Smith said after he went 20 of 24 passing with two TDs against the Jaguars. “The reality is that I know who I am. I’m never going to get too big or too high on it.”

But now all eyes will be on Wilson, especially after his tweet on Monday afternoon of the pin in his surgically repaired right middle finger being removed. The pin being removed is the first step in the realistic progression of when Wilson may be able to return to action.

There are still doctors exams and grip tests that’ll help determine Wilson’s progression. But with Seattle not playing for another 13 days, the chances have grown of Wilson being ready on Nov. 14 at Green Bay.

“We’re just kind of hoping for the best in terms of his return and that everything’s handled really well,” Carroll said Monday before Wilson’s tweet.

The context of who they played has to be taken into account, but it was another solid day for Seattle’s defense.

The Seahawks stymied the Jaguars for three quarters before giving up a big chunk of yards to Trevor Lawrence in the fourth quarter while holding a big lead. Seattle limited the Jaguars to just 99 yards of total offense in the first half, and 6 of 18 on third- and fourth-down conversion attempts in the game.

Even with Lawrence having a big fourth quarter, the 309 total yards allowed by Seattle was the third straight week holding its opponent under 350.

Alex Collins had 44 yards on 10 carries, but was playing with a nagging groin injury that should get better with rest. Rashaad Penny got seven carries but managed only 7 yards as he continues to struggle finding a role after missing time earlier in the season with a calf injury.

“I like what we’re doing in the run game scheme wise, but we have to find the consistency,” Carroll said. “Where it really shows up to me is at the end of the game. We did we didn’t run the ball well in the fourth quarter. And that’s when you want to really want to hammer the football.”

Carroll sounded as optimistic as he has in several weeks about the status of running back Chris Carson, who has been out due to a neck issue. Carroll said Carson will be examined by team medical personnel next Monday following the bye. If he’s cleared, Carson expects to practice with an eye on possibly playing in Week 10 against Green Bay.

Carson has struggled to get going this season with a season-high of 91 yards rushing in Week 1 against Indianapolis. Carson has missed the past three games.

“We’ll find out where he stands once we get to practice,” Carroll said. “He’s real determined to get that done so that I’m keeping my fingers crossed for him.”

Defensive lineman L.J. Collier was a healthy scratch for the sixth time in eight games on Sunday, seemingly leaving the former first-round pick without a role for the Seahawks.

Collier started all 16 games last season for Seattle and had three sacks. But this year, he has barely been able to get on the field despite the Seahawks regularly playing alignments with five defensive linemen in their base packages. Collier was active in Week 2 against Tennessee and Week 5 against the Rams, but has not otherwise played.

Seattle CB D.J. Reed suffered a strained groin against the Jaguars to the point that if it hadn’t been a blowout he wouldn’t have been able to play. Carroll said Reed had an MRI on Monday that didn’t show any additional damage. Having the extra week off should be key in increasing the chances that Reed could be back in time for the Packers on Nov. 14.

38 — Wilson underwent finger surgery on Oct. 8. If he’s able to play on Nov. 14 at Green Bay, 38 days will have elapsed between the surgery and Wilson possibly returning to the field.

The Seahawks will travel to Green Bay in Week 10, a place they have struggled badly. Including playoffs, Seattle has lost its last nine trips to Lambeau Field. It’s last win in Green Bay came on Nov. 1, 1999.