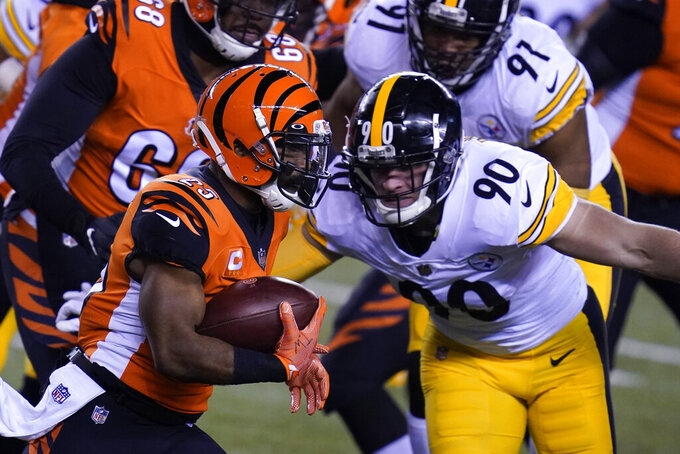 Cincinnati Bengals' Giovani Bernard (25) is tackled by Pittsburgh Steelers outside linebacker T.J. Watt (90) during the first half of an NFL football game, Monday, Dec. 21, 2020, in Cincinnati. (AP Photo/Michael Conroy)

PITTSBURGH (AP) — Mike Tomlin has a theory on what makes Steelers outside linebacker T.J. Watt go.

“T.J. is visiting from another planet, to be quite honest with you,” the longtime Pittsburgh head coach said this week when asked about Watt's spectacular 2020.

Technically, the youngest member of the Watt family in the NFL is from Wisconsin. It's his play, however, that's been otherworldly at times, one of the biggest reasons the Steelers (12-3) have locked up the AFC North for the seventh time in 14 seasons heading into Sunday's visit to Cleveland (10-5).

Watt's 15 sacks lead the NFL. A year after finishing third in the Defensive Player of the Year voting, Watt appears to be the front-runner. Racking up two sacks in last week's division-clinching win over Indianapolis — including a strip-sack of Colts quarterback Philip Rivers that set up a first-half touchdown — certainly helped.

Yet Watt, who was selected as Pittsburgh's Most Valuable Player by his teammates for the second straight year on Thursday, was a disruptive presence week in and week out. He's had at least a half-sack in 11 of 15 games, becoming the first player in franchise history to have multiple seasons of 14 sacks or more.

“He has freakishly unique talent coupled with freakishly unique work habits and mindset, and it produces what you guys witness every week, which in my opinion, is Defensive Player of the Year quality,” Tomlin said.

Tomlin would know. He watched former outside linebacker James Harrison win it in 2008. Recently minted Hall of Fame safety Troy Polamalu won it in 2010. Then again, Watt is pretty familiar with what a Defensive Player of the Year looks like. Oldest brother J.J. Watt has won the award three times while playing for Houston.

“He talks to his brother a lot,” Steelers defensive coordinator Keith Butler said. “They talk quite a bit in terms of what’s going on in the league. He watches a lot of film. He is going to try and study his opponent as best he can and try to use what he knows in the game when the lights come on. He does a good job of doing that.”

It's been that way for Watt since he entered the league as the 30th overall pick in 2017. He's already had 43 sacks in four seasons and at 26 is just entering his prime. While the Steelers will have to make plenty of difficult financial decisions during the offseason, attempting to lock up Watt for the long term won't be one of them.

Watt is the sixth player in franchise history and first since Harrison in 2007 and 2008 to be selected as team MVP in consecutive seasons. He called the honor more important than any league-wide award because it is voted on by the people who see him go to work every day.

“’It’s a very special honor to me because it’s my teammates and my peers,” Watt said. “None of it is possible without them.”

Maybe, but then again much of Pittsburgh's success — particularly the past two seasons — is due to Watt. In 2019 he was part of a defense that kept the Steelers into playoff contention into late December despite losing quarterback Ben Roethlisberger at halftime of Week 2. This season he has remained consistently effective despite playing as part of a linebacker group decimated by injury.

Inside linebacker Devin Bush was lost for the season in October and outside linebacker and good friend Bud Dupree's standout year was cut short by a knee injury suffered late in a win over Baltimore on Dec. 2. Even with unknowns such as Robert Spillane and Marcus Allen and recently acquired Avery Williamson in the middle and rookie Alex Highsmith bookending him on the outside, Watt has remained a force. He's picked up at least one sack in three of the four games since Dupree's injury.

“He does more than just sack the quarterback," Williamson said. "He gets the sack, fumbles. Fumbles from the running backs. He is definitely a phenomenal player. I am glad I get to play alongside him.”