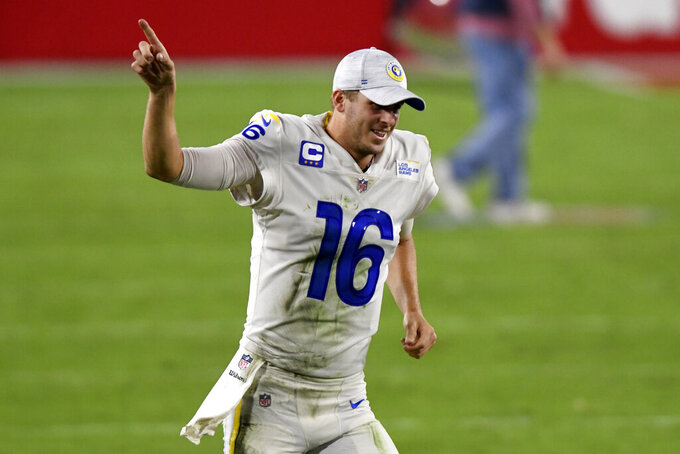 INGLEWOOD, Calif. (AP) — The Los Angeles Rams returned from their bye week this month and promptly jumped into first place in the NFC West with impressive wins over conference elites Seattle and Tampa Bay.

The San Francisco 49ers stumbled through three straight injury-plagued losses to NFC contenders Seattle, Green Bay and New Orleans before their own bye last weekend. They're still without injured Jimmy Garoppolo and George Kittle, and they face a difficult climb back to playoff contention despite their still-generous allotment of healthy talent.

Although current form and future prospects clearly favor the Rams (7-3) when they host the Niners (4-6) on Sunday, that doesn't fill coach Sean McVay with the slightest bit of confidence.

Not after three straight losses to Kyle Shanahan and the team that succeeded the Rams as conference champions.

“It isn’t like this isn’t a great football team,” McVay said of the Rams' first sub-.500 opponent in six weeks. "They’re the reigning NFC champions, a couple plays away from being Super Bowl champions. I know too much about these guys and their coaches and their players to ever take anything for granted.”

McVay's caution is well founded: Since McVay and Shanahan got their jobs in early 2017, Shanahan has won four of seven matchups, including 24-16 in Santa Clara last month that wasn't really close. The Niners racked up a whopping 291 yards in the first half against a defense that now ranks as the stingiest in the NFL, allowing 291.9 yards per game.

McVay has won 13 more regular-season games than Shanahan, who has a sub-.500 career record and just one playoff appearance. But in the games that count, his Niners regularly come up big.

“The Rams, they had our number when I first started out,” Shanahan said of LA's three wins in the coaches' first four matchups in 2017-18. "They’re playing as good as any team in the league right now. It’s going to be a huge challenge this week.”

San Francisco swept the two-game series last season with a dominating 20-7 victory in Los Angeles and a late comeback for a 34-31 win at home that eliminated the Rams from playoff contention despite their 9-7 finish. A victory Sunday would give San Francisco back-to-back season sweeps of the Rams for the first time since 2008-09.

“We were able to have success on defense going against them in the last couple outings,” said 49ers linebacker Fred Warner, a Southern California native. “But I know they’re trying to make a statement to get after us and make sure they’re starting on the right foot come Sunday.”

The Niners are coming off a much-needed bye week after being decimated by injuries. They could get some reinforcements on offense with leading rusher Raheem Mostert and No. 1 receiver Deebo Samuel both trying to return. Even the players who had been healthy needed a break.

“I feel like we needed it,” Warner said. “It was kind of toward that midpoint of the season and now we’re just really excited to get going again. Guys are fresh. We’re hungry. We want to get back to being competitive and winning ballgames. We’re excited about getting back to work this week.”

Rams quarterback Jared Goff has a chance to atone for a rough 19-for-38, 198-yard performance against San Francisco. He went into the bye two weeks later with an awful four-turnover performance in Miami, but the childhood Niners fan has markedly improved his effectiveness over the past two weeks, passing for 678 yards in consecutive wins.

“We came into the year knowing every (NFC West) team got a little bit better, and every team is going to be good,” Goff said. “These division games are the ones you need. These guys have taken care of us three in a row now. Hopefully we can buck that trend.”

The Rams are on a short, jumbled week of preparation after not getting home from their win over Tampa Bay until Tuesday morning. They also canceled practice Friday and held their team meetings virtually after two members of the organization received COVID-19 test results that required further testing.

Joe Noteboom filled in solidly for Whitworth last week despite minimal NFL experience at the position, but the Niners will attempt to test him. Kiser likely will be replaced by Troy Reeder as LA's middle linebacker, but the middle level of the defense already was its weakest spot.

The Niners are getting big contributions from their two first-round draft picks. No. 14 overall Javon Kinlaw is coming off his best game with 1 1/2 sacks against New Orleans and three tackles for a loss. No. 25 pick Brandon Aiyuk has 21 catches for 281 yards and two TDs in his past three games.

Rams defensive tackle Aaron Donald expressed his frustration this week with the lack of holding calls against opponents attempting to block him. The 2019 All-Pro hasn't made a tackle in two weeks, but he has 11 1/2 sacks, 14 tackles for loss and 26 quarterback hits in 12 career games against the 49ers.

When Shanahan was asked if he'd seen any drop-off in Donald's play lately, the coach quickly quashed that idea: "Absolutely not. I wish, but no, I haven’t. Been waiting a long time for that. Doesn’t seem like it’s happening.”