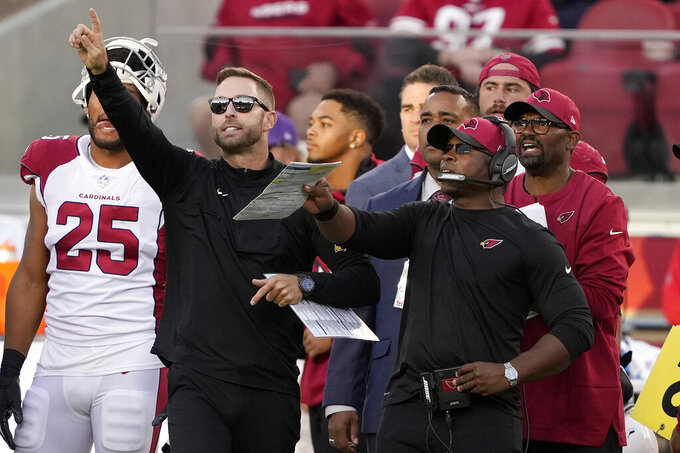 He's got plenty of company in that regard.

He'd also have good company if he received a second chance, an opportunity that's proved elusive for many of the league's Black head coaches. That could change with Joseph: He's been the defensive coordinator the past three years in Arizona, overseeing an impressive overhaul that's helped the Cardinals make the playoffs for the first time since 2015.

Joseph said he would welcome a second chance after getting fired by the Denver Broncos in 2018, though he's not one to lobby publicly for other jobs.

Former Cincinnati Bengals coach Marvin Lewis, who is also Black and hired Joseph as a defensive backs coach in 2014, will happily do it for him.

“He’d be an excellent fit for any team,” Lewis said. “He’s got great energy, great demeanor, he can deal with the day-to-day operations with the players, which is the toughest part of the job. All those things.

“He deserves the opportunity.”

There are plenty of examples of coaches who had a so-so or even rough first NFL head coaching experience before finding success in their second job. Among them: Mike Shanahan, Tom Coughlin — and arguably the most successful coach in league history, Bill Belichick, who was fired by the Browns in 1995 before taking over the Patriots in 2000 and winning six Super Bowls over the next two decades.

Joseph was the head coach of the Broncos for just two years and had an 11-21 record before being fired following the 2018 season.

The 49-year-old Joseph isn't bitter about his time in Denver, saying the franchise was dealing with a difficult transition. Hall of Fame quarterback Peyton Manning retired after leading the Broncos to a Super Bowl win in 2015 and the Broncos were still looking for consistency under center.

The Broncos were used to winning and patience was thin. Two quick years and Joseph's head coaching tenure was over.

Now he waits for another chance.

“I’ve been with a lot of guys who have given me the blueprint of how to make it work,” Joseph said. “But most young head coaches, when you get a job, obviously the job is probably broken and you need time to fix it. The time they give you now these days is short and slim, so you have to go in and fix it quick.

“It’s a challenge, but it’s a fun challenge.”

Joseph has certainly proved his value to the Cardinals, especially this season. When head coach Kliff Kingsbury was sidelined with COVID-19 in October, Joseph stepped in with a seamless transition and led the Cardinals to a 37-14 road win over the Cleveland Browns.

“You’re still always thinking about the things and decisions that a head coach needs to make all the time,” Lewis said. “That’s been such a positive thing for him. That’s just such valuable time.”

Kingsbury, who has an offensive background, has constantly praised Joseph's coaching ability and never wavered with support, even after the 2019 season wasn't particularly pretty. He added a few weeks ago that Joseph “will probably be a head coach again next year” when discussing how well the defense has played.

But it's understandable if some are skeptical that Joseph will get an opportunity. The NFL has just three minority head coaches out of 32 teams even though Black players make up approximately 70% of the rosters.

Joseph and Lewis aren't sure why Black coaches haven't been hired with regularity over the past few offseasons. Lewis, who led the Bengals for 16 years, said the lack of progress is frustrating.

“There's no question it's not better right now,” Lewis said. “It'll only be proven better over time.”

Joseph is certainly a well-seasoned candidate. He counts a who's-who of former head coaches as mentors, including Gary Kubiak, Mike Singletary, Wade Phillips and Lewis.

One thing that might be holding him back from a second chance: his expertise is on the defensive side of the ball. The trend in the NFL has been to hire offense-minded coaches — particularly ones good at working with quarterbacks — because the position has become so important across the league. Joseph's current boss Kingsbury fits that mold.

“I think that's where that started, looking for a quarterback fixer,” Joseph said. “There's not too many minority coaches coaching the quarterback or being the offensive coordinator. That's where the number gets unbalanced.”

Joseph said that it would be “bizarre” if owners were making hiring decisions based on skin color.

Joseph is certainly no stranger to hard work. Now he just needs another chance for a head coaching position.

“There’s plenty of examples of guys who haven’t been very successful at the first stop,” Lewis said. “Then they get other opportunities and things fall into place a little better.”