Thibodeux, Neal are the foundation of Giants rebuild 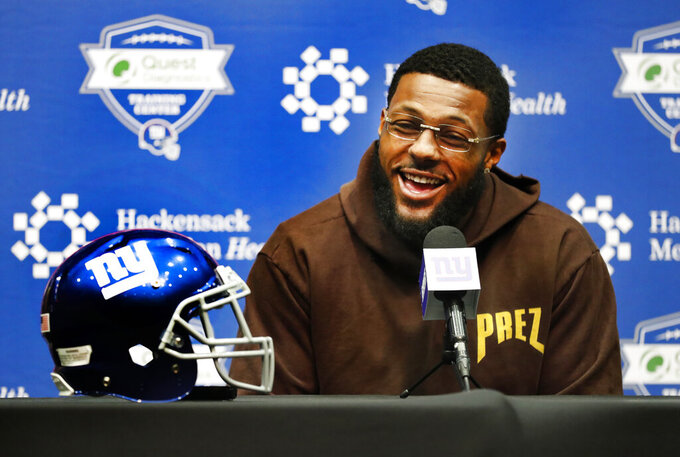 EAST RUTHERFORD, N.J. (AP) — Getting picked in the first round of the NFL draft by the New York Giants isn't the first time Kayvon Thibodeaux and Evan Neal have been paired.

When the two went to football camps as high school players, coaches constantly lined them up against each other.

Thibodeaux was the best edge rusher. Neal was the top lineman. So they went at it.

The two will probably compete at practice under new coach Brian Daboll, but it's clear they are the foundation general manager Joe Schoen has selected to start rebuilding the Giants after a 4-13 season. It was their fifth straight losing campaign.

Handling his first draft as a GM, Schoen made a couple of trades to increase his picks from nine to 11 and then over the past three days selected players who met needs and, in some cases, made positions more competitive.

Thibodeaux and Neal are expected to become starters. Neal is penciled in at right tackle and Thibodeaux will play anywhere defensive coordinator Wink Martindale wants to create mismatches.

“I believe it’s going to push us tremendously," Neal said of facing Thibodeaux. “I believe in iron sharpens iron, so what better place to get better than the New York Giants? So I’m just excited to go out there and compete my hardest. Hopefully we make each other better.”

“Every time we came to a camp, we knew it was like, OK, this is how it's going to set up,” Thibodeaux said. “He’s the best. I’m the best. Now let’s get better. Let’s prove to ourselves on why we got this far.”

The Giants tried to add help on both sides of the ball. On Friday, they took Kentucky wide receiver Wan'Dale Robinson in the second round and added North Carolina offensive lineman Joshua Ezeudu and LSU safety Cordale Flott in the third.

There were six picks Saturday with New York taking tight end Daniel Bellinger of San Diego State and Iowa safety Dane Belton in the fourth round; linebacker Micah McFadden of Indiana and defensive tackle D.J. Davidson of Arizona State in the fifth and offensive lineman Marcus McKethan of North Carolina — Ezeudu's teammate — and linebacker Darrian Beavers of Cincinnati in the sixth round.

“I think we added competition and depth,” Schoen said. “Hopefully many guys can turn into stars, but we want them to come in and work hard.”

Thibodeaux will bring a personality to the locker room. He was hoarse Saturday from his recent singing and he is certainly confident. When asked if he could stop the run, he said: “Watch the tape.”

For his first season, he knows what he needs to do.

Schoen refuses to say what the Giants have in store for veteran James Bradberry, their No. 1 cornerback. He is due to count $22 million against the cap this season.

Schoen said the Giants have received inquiries about a trade and there is also a chance he might be cut after June to save money. The GM also said he might play for the team this season. He expects a decision soon.

New York drafted Flott in the third round as insurance. It has second-year players Aaron Robinson and Rodarius Williams back along with Adoree Jackson and Darnay Holmes.

A couple of days after not picking up the fifth-year option on Daniel Jones, the Giants didn't draft a quarterback.

That leaves Jones, free agents signees Tyrod Taylor and Davis Webb and Brian Lewerke for this season along with any college free agents.

Schoen said the Giants did their due diligence in scouting and talking to the quarterbacks for the draft. They did not find the right player to take.

The offensive line has been the weakest spot, and Schoen and Daboll are trying to fix it.

“I know the guys are working hard and they are smart," Schoen said.

The next four months will show if the Giants have five good ones.

COST OF A NUMBER

Thibodeaux wore No. 5 at Oregon and he would very much like to wear it with the Giants.

The problem is veteran placekicker Graham Gano wears No. 5, and he seemingly has a high asking price for it.

“That is something I’m pursuing,” said Thibodeaux, who will sign a contract which will cover the cost. “Obviously he’s a vet and he’s put the work in, and he’s got five kids, so you know there’s a whole lot of negotiating that’s going to have to happen.”