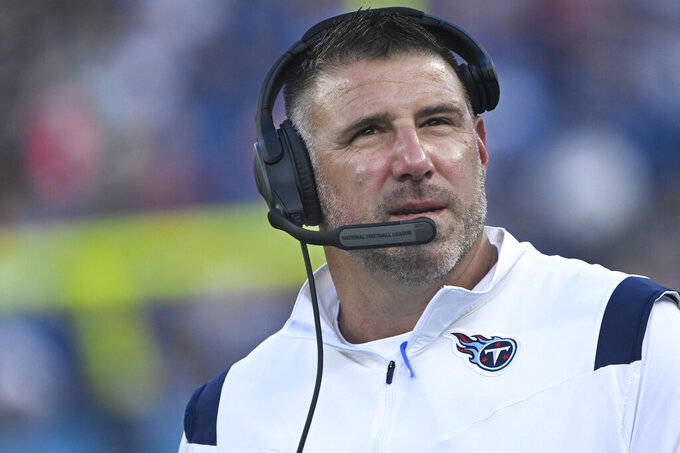 Tennessee Titans head coach Mike Vrabel watches from the sideline in the first half of a preseason NFL football game against the Arizona Cardinals Saturday, Aug. 27, 2022, in Nashville, Tenn. (AP Photo/John Amis)

Terms of the deal were not announced. The Titans open the season Sunday by hosting the New York Giants.

“It means a lot,” Hooker said after practice. “It shows how much the Titans believe in me and trust me, and I have that same trust and confidence in them. I am just going to do my job to make sure I can help this team win and help them win a Super Bowl.”

Hooker is going into his fourth season, having started 15 of 44 games since Tennessee drafted him out of Iowa in the fourth round of the 2019 draft.

He has 119 tackles, five interceptions, 12 passes defended and a forced fumble in three seasons. He led the Titans with four interceptions in 2020, and he started 12 games last year. He finished with 62 tackles and an interception, and had an interception in the divisional playoff loss to Cincinnati.

“He's somebody that's gone in there and taken advantage of his opportunity and been productive and versatile," Titans coach Mike Vrabel said. “I like the way that he practices, and his daily approach."

He is tied for third-most interceptions among safeties drafted in 2019, trailing only Darnell Savage Jr. (eight) and Taylor Rapp (seven). Hooker's contract had been due to expire after this season before the extension. Now the Titans have Hooker and two-time All-Pro Kevin Byard locked down for the foreseeable future.

“It definitely gives me that clear mind that I can go out there and not have to worry about getting injured and that kind of stuff,” Hooker said. “I can play free and just play my ball.”