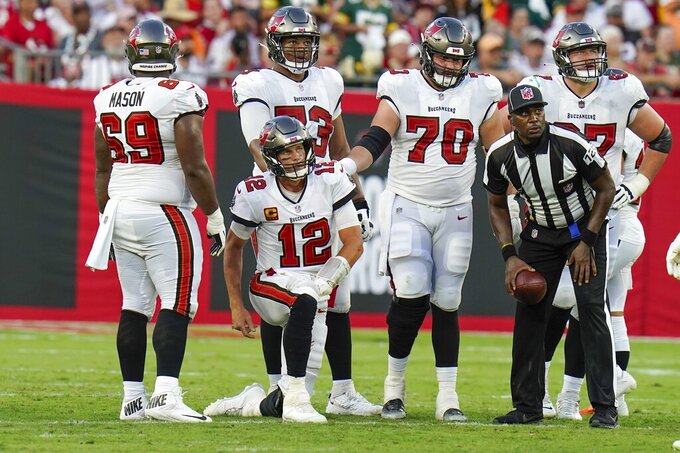 Tampa Bay Buccaneers' Tom Brady gets up after being sacked during the second half of an NFL football game against the Green Bay Packers Sunday, Sept. 25, 2022, in Tampa, Fla. (AP Photo/Chris O'Meara) 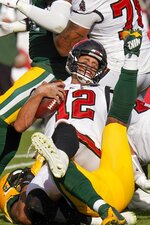 TAMPA, Fla. (AP) — Tom Brady ducked to avoid a sack and rumbled for 18 yards only to bust his knee brace and see the play negated by penalty.

Missing his top three receivers to injuries and suspension and his favorite target to retirement, the 45-year-old Brady isn’t passing at his usual prolific rate.

Still, the Tampa Bay Buccaneers had a chance against the Green Bay Packers after Brady connected with Russell Gage on a 1-yard touchdown with 14 seconds left. But a delay-of-game penalty pushed the 2-point conversion back to the 7 and Brady’s pass fell incomplete, giving the Packers a 14-12 victory Sunday.

“Our job is to go out there and score points and we’re just not doing that,” Brady said. “You’re not going to score points if you don’t execute well.”

The Buccaneers were missing four-time Pro Bowl wide receiver Mike Evans because he was suspended one game for his role in a fight against New Orleans last week. Chris Godwin and seven-time Pro Bowl wideout Julio Jones haven’t played since the opener because they’re hurt. Tight end Rob Gronkowski retired.

Brady doesn’t have his starting offensive line, either.

“We didn’t have to have those guys to win this game,” Bucs coach Todd Bowles said. “We just needed to play smart. We had chances to win the game.”

“Too loose with the ball,” Brady said. “That’s important for all of us. We talk about ball security. We have to do a good job of ball security in the pass game. That means protection. That means me making good reads and good throws. That means them securing the ball when they catch it. We all have to do a great job of it. ... When you hold a team to 14 points, that’s a great defensive effort, especially against a team like that.”

Brady scrambled 18 yards to the Buccaneers 48 on a third-and-3 late in the third quarter but a holding call on Walton wiped it out. It would've been his longest run since 2007 and the third-longest of his 23-year career.

Through three games, Brady and the Buccaneers have scored three offensive touchdowns. Last year, Tampa’s offense was second in the NFL in points and total yards. Brady led the league with 5,316 yards passing and 43 TDs.

Brady completed his first 12 passes against the Packers, and finished 31 of 42 for 271 yards and one TD. They finished up with a 99-yard drive but couldn't convert to send the game to overtime.

“We’re not running as good as we’re capable, our pass game hasn’t been as good," Brady said. “We’ll keep working at it.”