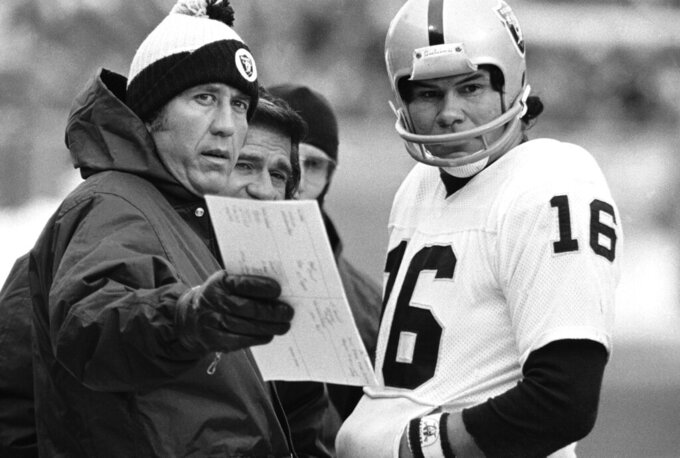 FILE - In this Jan. 4, 1981, file photo, Oakland Raiders head coach Tom Flores, left, talks over a play with quarterback Jim Plunkett during an AFC playoff game in Cleveland. The AFL gave Flores one last chance when the fledging league launched in 1960 and Flores seized the opportunity. He became the original quarterback of the Raiders before going on to a trailblazing career as a coach and executive that landed him in the Pro Football Hall of Fame following a lengthy wait. (AP Photo/File) 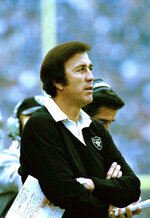 Tom Flores was ready to pursue a career in teaching instead of football after getting cut by a team in Canada, having a stint with a minor league team in California and failing to hook on with Washington in the NFL.

The AFL gave Flores one last chance when the fledging league launched in 1960 and Flores seized the opportunity.

He became the original quarterback of the Oakland Raiders before going on to a trailblazing career as a coach and executive that landed him in the Pro Football Hall of Fame following a lengthy wait.

“I was fortunate,” Flores said. “I had three shots at it. On the third shot, I said this new league is starting up and maybe I’ll give it one more chance. I don’t owe anybody any money. I can work the rest of my life. That was 61 years ago and I’m still at it.”

It worked out well enough for Flores to achieve the long-awaited goal of making it to the Hall in Canton, Ohio, after enduring several missed chances along the way.

After so many close calls, Flores said he became guarded about whether it would ever happen. But that all changed when Hall of Fame President David Baker gave him the news earlier this year.

Flores joined Hall of Famer Mike Ditka as the only men in NFL history to win Super Bowls as a player, assistant coach and head coach.

But Flores’ biggest impact came when Al Davis hired him to replace John Madden as coach in Oakland in 1979. The son of Mexican immigrants became one of the earliest minorities to become a head coach in the NFL. Fritz Pollard was the first Black coach in the NFL in the 1920s and the only other minority head coach before Flores was Mexican-born Tom Fears, who spent four years in charge of the Saints.

Flores said he felt embraced by the large Mexican population in Southern California when the Raiders moved to Los Angeles in 1982 and relishes the role he plays in his community.

“It wasn’t as big a thing when I first started,” Flores said. “I never thought about it. I never thought I was hired because of my ethnic background. I was hired because of what I could do on the field as a player and as a coach. I still feel that way. It doesn’t matter what color you are, you've got to be ready to perform and you’ve got to be able to win otherwise you’re going to be unemployed whatever color you are. Fortunately, I was lucky enough to be worthy enough and good enough to win enough and establish myself. Now here I am.”

Flores thrived after Davis hired him to take over a successful franchise that had won a Super Bowl in the 1976 season when he was an assistant under John Madden. Flores helped lead a transition from Hall of Famer Ken Stabler to Jim Plunkett at quarterback and steadied the Raiders during their move in 1982 from Oakland to Los Angeles.

Flores won Super Bowls in both cities, taking the wild-card Raiders to the championship in the 1980 season over the Philadelphia Eagles and then winning it all again three years later for Los Angeles against Washington.

Flores was replaced by Mike Shanahan following the 1987 season with an 83-53 regular season record and 8-3 mark in the playoffs for the Raiders.

He then took over the Seattle Seahawks as president and general manager in 1989 and spent six mostly disappointing seasons there, serving as head coach in the final three. His 14-34 record in those seasons left him with a 97-87 career mark in the regular season and contributed to the delay in him making the Pro Football Hall of Fame.

But that didn’t lessen the impact he had on other minority coaches, including the only other coach of Hispanic descent to lead a team to the Super Bowl in Ron Rivera.

“When you talk about me and my Hispanic heritage, it was Tom Flores and (Raiders quarterback) Jim Plunkett, guys like that, and (NFL quarterback) Roman Gabriel,” Washington coach Ron Rivera said in 2016. “Those were guys I could look up to and really aspire to be like them.”