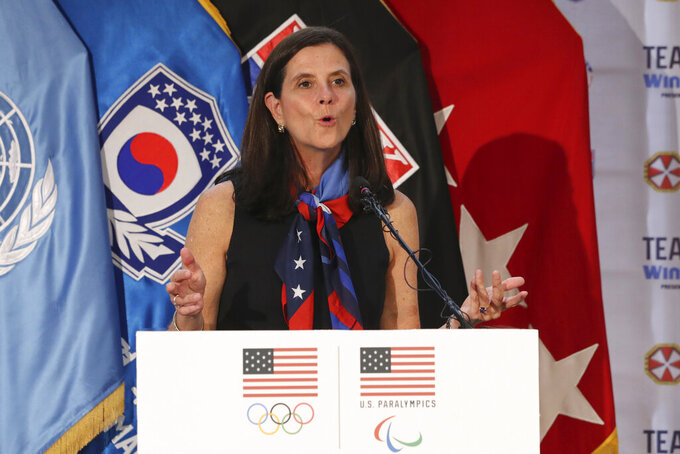 FILE - In this Aug. 1, 2017, file photo, then-U.S. Olympic Committee chief marketing officer Lisa Baird speaks about the Team USA WinterFest for the upcoming 2018 Pyeongchang Winter Olympic Games, at Yongsan Garrison, a U.S. military base in Seoul, South Korea. Lisa Baird is the new commissioner of the National Women's Soccer League. The former chief of marketing for the U.S. Olympic Committee hopes she can bring the same ideas to soccer as those that ramped up Olympic endorsements. (AP Photo/Lee Jin-man, File)

The marketing executive who branded the U.S. Olympic squad “Team USA” will now try to turn American women’s soccer players into household names more than once every four years.

Lisa Baird, the longtime marketing chief at the U.S. Olympic Committee, was named commissioner of the National Women’s Soccer League on Thursday.

Baird most recently spent more than a year at New York Public Radio after nine years at the USOC. She will now be charged with running a league that is positioned to capture more cash and eyeballs after America’s stirring World Cup victory last summer.

The nine-team league, founded in 2013, got its first official beer sponsor last year when it signed a deal with Budweiser. Attendance rose to an average of 7,337 in 2019 — a nearly 22% increase over the previous year, much of which could have been attributed to a post-World Cup boost.

Baird said commercial partnerships in the Olympics can have "deeper, more profound platforms” in part because there are Summer or Winter Games every two years.

“I'm confident I can bring that same kind of dynamic to the NWSL. We want to shine a spotlight on the terrific players in this league," she told The Associated Press.

NWSL is trying to complete an agreement for an improved TV deal. A&E cut its contract short by a year at the start of 2019, and ESPN stepped in to televise 14 games to close out last season.

“We know that having the right coverage, the games, the clubs, is important going forward,” Baird said. “I’m confident the owners have done an incredible search and had the right conversations with the right partners.”

Baird joins a sport that has been dealing with pay equity issues that were underscored during the World Cup.

Players on the U.S. women’s team are seeking more than $66 million in damages as part of a gender discrimination suit against U.S. Soccer that alleges they are unfairly paid compared to the men. Some of those players, including Megan Rapinoe, also play in the NWSL. Though the league has a management agreement with the U.S. federation, it is not involved in that lawsuit.

Separately, the league increased its salary cap by nearly 20% for 2020, to $650,000 a team, and increased its minimum salary to $20,000. It also introduced “allocation money,” which allows teams to pay more than the league maximum of $50,000 as a way of competing with European teams for top players.

Before going to the USOC, Baird was senior vice president of marketing and licensing for the NFL, where she helped the league land first-time deals with Nike, Under Armour and Fanatics. Before that, she held the same position at IBM.

At the USOC, Baird cut about $1 billion worth of deals over nearly a decade and also rebranded the team to Team USA. Though the NWSL won't generate as much sponsorship, she's confident there are fundamentals she can bring from the Olympic world to women's soccer.

“This league has an incredible ability to have players stand for a purpose and passion because of who they are and who they represent, and how exciting women’s sports are in the U.S. right now,” Baird said.