Vikings offense with O'Connell still a work in progress 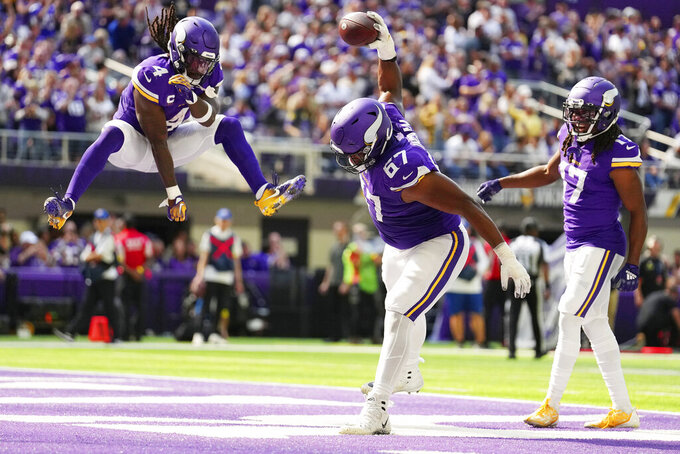 Minnesota Vikings guard Ed Ingram (67) spikes the ball after running back Dalvin Cook (4) scored a touchdown in the second quarter of an NFL game against the Detroit Lions, Sunday, Sept. 25, 2022, in Minneapolis. (Anthony Souffle/Star Tribune via AP)

MINNEAPOLIS (AP) — After opening with a decisive win against the Green Bay Packers, the Minnesota Vikings have been tested the past two weeks.

A Minnesota offense looking to make a jump under new coach Kevin O’Connell is still a work in progress. But a three-play, 56-yard drive in the final minute Sunday against Detroit led to a comeback win and has the Vikings tied atop the NFC North while enduring their growing pains.

With star receiver Justin Jefferson being taken away by opponents and with running back Dalvin Cook out of the game with an injury, quarterback Kirk Cousins found K.J. Osborn for two big plays, including a 28-yard touchdown with 45 seconds remaining in Sunday’s 28-24 win.

Minnesota had 317 total yards before the game-winning drive. Through three weeks, the Vikings are 18th in the NFL in offensive yards (344 per game) and tied for 17th in points per game (19.3) entering Monday.

“We’re just continuing to evolve and we are still just three games into, officially, our guys running this system and this offense, so there’s going to be some times where we’ve got to try to have that learning curve happen on the fly,” O’Connell said Monday. “We’ve got such talented players that we feel strongly about when they do that and when they feel comfortable completely, the execution will be a bit more consistent across the board and we’ll be at our best.”

Despite entering O’Connell’s first season as coach, Minnesota chose health over preseason game repetitions, sitting out much of the first-team offense for the three games.

In Week 1 against Green Bay, the Vikings didn’t show many signs of novelty, racing out to a 20-0 lead and putting up 395 yards.

The past two weeks, with Philadelphia and Detroit able to see what Minnesota did against the Packers, the execution on offense has been a bigger challenge.

“Sometimes, for whatever reason, it can be one or 11, where there’s just some indecisiveness somewhere across the board of guys doing their jobs depending on the look,” O’Connell said.

Cook left Sunday’s game late in the third quarter with a shoulder injury when he fumbled on his final carry. Before that, the Vikings’ offensive line opened up several holes in the running game.

Cook’s longest run was 13 yards, but he averaged 5.6 yards per carry. With one cut, he often found running room straight up the middle of the defense.

Cousins, who has only been sacked four times, has 32 pass attempts while being blitzed this season, according to SportRadar. He’s completed just 12 passes for 81 yards. His 51.0 passer rating in those situations is ahead of only New England’s Mac Jones and Chicago’s Justin Fields.

Cousins is 0 for 9 when facing at least six rushers.

Osborn was expected to have an increased role under O’Connell, with three-receiver sets becoming more common. The third-year receiver only had six targets in the first two games, catching five passes for 39 yards.

With Jefferson drawing extra attention, Osborn came through on Sunday. He had five catches on eight targets for 73 yards in the game. On the final drive, Osborn got loose for two 28-yard receptions.

Greg Joseph had been perfect through two games, hitting three field goals and three extra-point attempts. On Sunday, he connected on all four of his PATs, but missed a pair of 56-yard field goals.

Joseph has already made one 56-yard attempt this season for his career-long conversion, but neither attempt Sunday was close.

“My confidence will not waver in Greg, and everybody in that locker room feels that same way,” O’Connell said.

Cook’s status will be one to watch. He sustained another shoulder injury, with O’Connell calling it a subluxation. Cook has played in the past with a harness on the shoulder.

“He’s pretty sore today, but obviously something he’s familiar with, with his shoulder,” O’Connell said. “He’s tough, he’s rip and ready to try to get back out there and go, but we’ll take it day to day.”

Safety Harrison Smith, who missed Sunday with a concussion, has passed testing and will be eased into practice with the expectation he’ll play this week. O’Connell said he hopes rookie cornerback Andrew Booth, who’s missed two games with a quadriceps injury, will get back to practice this week.

Another week provides another challenge for Minnesota. This time, it’s the opponent and the circumstances. The Vikings will practice at home Wednesday and Thursday before leaving to play the New Orleans Saints in London on Sunday.