Walker, Panthers look to bounce back vs 1st-place Falcons 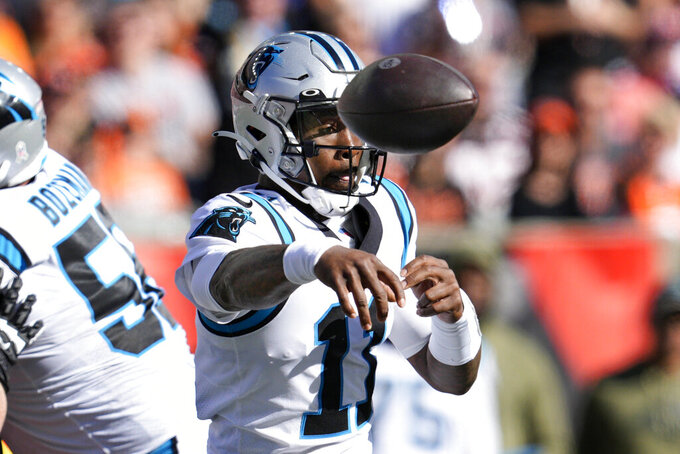 Carolina Panthers quarterback PJ Walker (11) passes against the Cincinnati Bengals during the first half of an NFL football game, Sunday, Nov. 6, 2022, in Cincinnati. (AP Photo/Jeff Dean)

The Panthers quarterback was 3 of 10 passing for 9 yards with two interceptions and got benched with Carolina trailing 35-0 at halftime to the Cincinnati Bengals.

Yet, despite Walker’s 0.0 QB rating — and with backups Baker Mayfield and Sam Darnold considered healthy and ready to go — Panthers interim coach Steve Wilks is sticking with Walker on Thursday night against the first-place Atlanta Falcons (4-5).

A short week played into that decision, but Wilks said it's also a reflection of how well Walker played in Carolina's 37-34 overtime loss to the Falcons on Oct. 30 in Atlanta. He threw for 317 yards, including a 62-yard desperation touchdown pass with 12 seconds left that tied the game at 34.

That play could have led to a victory had D.J. Moore and Stephen Sullivan not been penalized 15 yards for removing their helmets as part of a raucous end zone celebration and kicker Eddy Pineiro not shanked the ensuing go-ahead 48-yard extra point.

But Walker failed to follow up that game with a strong outing versus Cincinnati.

It's unclear how Mayfield feels about that decision. Mayfield, who led three touchdown drives against the Bengals in the second half on Sunday, didn't address reporters this week.

The Falcons will look to bounce back from a tough 20-17 loss last week to the Los Angeles Chargers — one that allowed Tom Brady and the Tampa Bay Buccaneers move into a tie for first place in the wide-open NFC South after they battled back to beat the Los Angeles Rams.

“It’ll be a huge opportunity for us Thursday night,” Falcons coach Arthur Smith said. “As bad as that felt (on Sunday), you always got to flip the page even quicker.”

Atlanta ranks near the bottom of the league in yards passing and attempts in its run-first offense.

Marcus Mariota had a big game in Week 8 against the Panthers, completing 20 of 28 passes for 253 yards and three touchdowns. He also had a key 30-yard run in overtime to set up Younghoe Koo’s game-winning 41-yard field goal. Mariota did throw two interceptions.

But Mariota has struggled to maintain consistency. He couldn’t connect with rookie Drake London and tight end Kyle Pitts on deep passes in the loss to the Chargers.

Mariota completed only 12 of 23 passes for 129 yards and has completed fewer than 15 passes in six of nine games.

The Falcons offensive line should be ready to go as they prepare to face the struggling Panthers front seven.

Carolina allowed running back Joe Mixon to run for 153 yards and four touchdowns last week and the Bengals had 241 yards overall on the ground.

The Falcons have the league's fourth-best rushing attack and they've got Cordarrelle Patterson back from injured reserve. Patterson, who did not play against Carolina in the previous matchup, ran for two scores against the Chargers.

“We have to flush that last game,” said Panthers linebacker Shaq Thompson. “We know they like to run the ball, so there's going to be a lot of running and it's going to be a physical game.”

Falcons rookie Tyler Allgeier passed Patterson for the team lead in the game Patterson returned after missing four following a knee injury. Allgeier, a fifth-round pick from BYU, ran for a career-high 99 yards on 10 carries against the Chargers and leads Atlanta with 423 yards.

The Falcons’ running game has been balanced with Caleb Huntley and quarterback Mariota also contributing.

The Panthers had success on the ground against the Falcons in the previous matchup and will look to control the game with a steady ground attack.

D’Onta Foreman ran for 118 yards and a career-high three touchdowns in the previous meeting, along with a 2-point conversion. It was Foreman’s second straight 118-yard rushing game.

However, Foreman was held to 23 yards on seven carries last week as the Panthers fell behind early and were forced into passing mode.

“Foreman is a physical runner, he makes that one cut and he gets downhill in a hurry,” Smith said.

Wilks said the Panthers are sticking with interim coordinator Al Holcomb as their defensive play-caller despite Carolina giving up 79 points over the past two games.

However, Wilks did fire cornerbacks coach Evan Cooper and defensive line coach Paul Pasqualoni on Monday, one day after Carolina's 42-21 loss to the Bengals.