Washington's RFK Stadium to be demolished by 2021 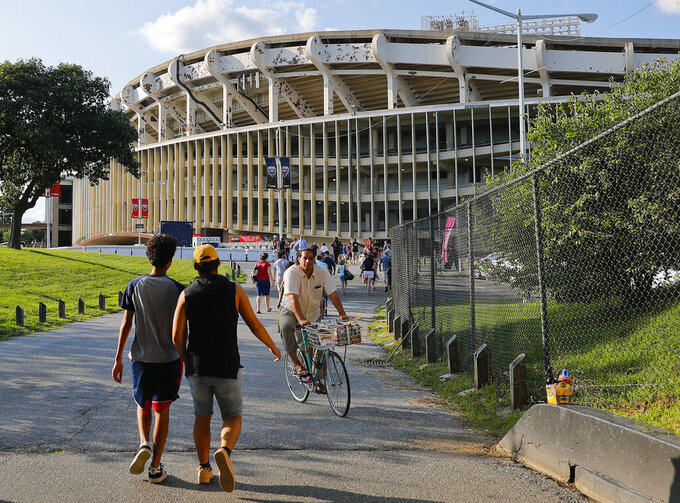 FILE - In this Aug. 5, 2017, file photo people make their way to RFK Stadium in Washington before an MLS soccer match between D.C. United and Toronto FC. The stadium, the former home of the NFL’s Washington Redskins, Major League Baseball’s Washington Nationals and Senators, and Major League Soccer’s D.C. United, will be demolished by 2021, local officials in Washington said. (AP Photo/Pablo Martinez Monsivais, File)

Events DC, the city agency that manages the stadium, began soliciting bids on Thursday for the demolition of the vacant, deteriorating structure, which opened in 1961 as D.C. Stadium and was renamed in 1969 for Robert F. Kennedy the year after he was assassinated.

RFK was among the first of a wave of multi-purpose stadiums built in the 1960s but was most closely associated with the Redskins, where fans created a raucous, intimidating atmosphere to support teams that won three Super Bowls in the 1980s and '90s.

The Redskins played their final game at RFK in 1996. The Nationals played there for three seasons after the former Expos relocated from Montreal before moving to the new Nationals Park in 2008. D.C. United, the stadium's last major tenant, called RFK home from MLS' inception in 1996 until 2017. World Cup games were played at the venue in 1994.

Redskins owner Daniel Snyder has spoken with Washington Mayor Muriel Bowser about the possibility of a new stadium at the RFK site, but the city's current plan is to transform the site into recreational and event space. The Redskins have also considered building a new stadium in Maryland or Virginia. The team is contractually obligated to play at FedEx Field in Landover, Maryland, until 2027.