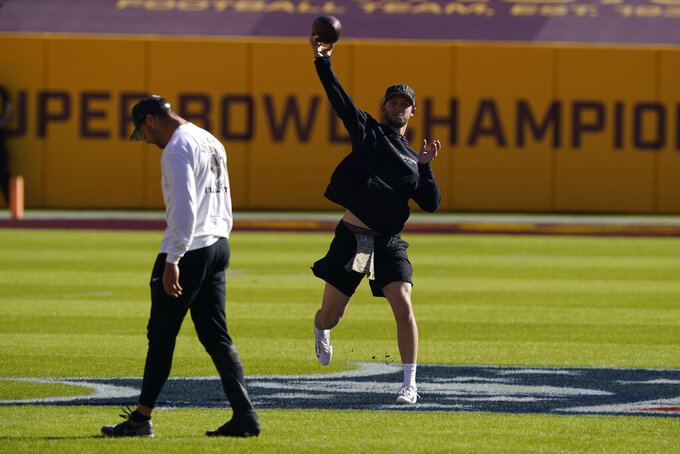 The last time Alex Smith practiced as a starting quarterback, Washington wasn't just known as “Football Team,” Jay Gruden was the coach, and the world had not been plunged into a pandemic.

That was November 2018, before his right leg bent the wrong way and snapped, breaking the tibia and fibula in gruesome fashion. Smith endured 17 surgeries, survived a life-threatening infection and progressed far enough to get back on the field in two relief appearances earlier this season.

Smith is poised to start an NFL game for the first time in two years when Washington visits Detroit on Sunday, another step in his remarkable journey from an injury that put his career in jeopardy.

"It’s an amazing feeling, and I love the challenge," Smith said Wednesday. “It’s been a long time, even just driving into work with that feeling (of) knowing that the ball’s in your hands."

Smith had the ball and control of his own life ripped out of his hands Nov. 18, 2018, and this milestone comes almost two years to the day later. He has amazed observers near and far unsure he could play again, let alone look a lot like his pre-injury self.

The 36-year-old Smith got Washington back into its last game with 325 yards and his first touchdown pass in 748 days, but also threw three costly interceptions in a 23-30 loss to the New York Giants. Green Bay Packers QB Aaron Rodgers was watching when Smith entered in place of injured starter Kyle Allen and rooted for the fellow 2005 first-round pick to lead Washington to a comeback victory

“Not having an idea what it took but just watching from afar, what he put his body through to get back on the field is incredible,” Rodgers said. “I don’t know how you can’t root and pull for a guy like that and hope he continues to go out and ball out. So that’s what I’ll be hoping for every single week with him as a starter.”

Former teammates and even those with no prior relationship with Smith are pulling for him. Kansas City starter Patrick Mahomes called Smith “truly a special human” for what he has accomplished, and another former Chiefs teammate is looking forward to seeing him Sunday before the game.

“Definitely looking to catch up,” said Lions backup Chase Daniel, who called Smith a top-five teammate after playing with him for three years. “It’s easy to root for him. You want to see him do good.”

Maybe not against his team, but Detroit coach Matt Patricia shares that sentiment and respect for Smith rehabbing to get to this point.

“I can’t, off the top of my head, think of anything as probably public and severe as his was," Patricia said. “Everyone deals with a lot of stuff certainly through the course of the year, but when you’re going out there and you know everything that that guy next you has been through, you kind of just go out there and push a little bit more. It’s a great story. It’s an inspiration.”

Smith, chosen by coach Ron Rivera to start over 2019 first-round pick Dwayne Haskins, is inspiring plenty of people inside Washington's organization. Offensive coordinator Scott Turner acknowledged he wasn't sure this was possible, and Smith's example is rubbing off on younger players.

“When you see a guy like him working, still working to this day, that makes you want to work, too, because you see the blueprint from him,” receiver Cam Sims said. “He comes in early, leaves late, (he's) friendly. He teaches you, he gives you advice and stuff like that. One day I hope I can be like him.”

There aren't many players who can claim a road back as impressive as Smith's, with Daniel calling it one of the best stories in NFL history. Even better now, Smith has progressed beyond thinking about his surgically repaired leg and worrying about getting hit and is now focused on just playing football.

“I feel like I’m ready to roll,” Smith said. “I got the opportunity this week and I’m going to make the most of it.”

NOTES: Rookie running back Antonio Gibson missed practice Wednesday with a shoulder injury. ... Thomas Davis was absent from practice not related to injury. The veteran linebacker has been inactive in recent weeks.