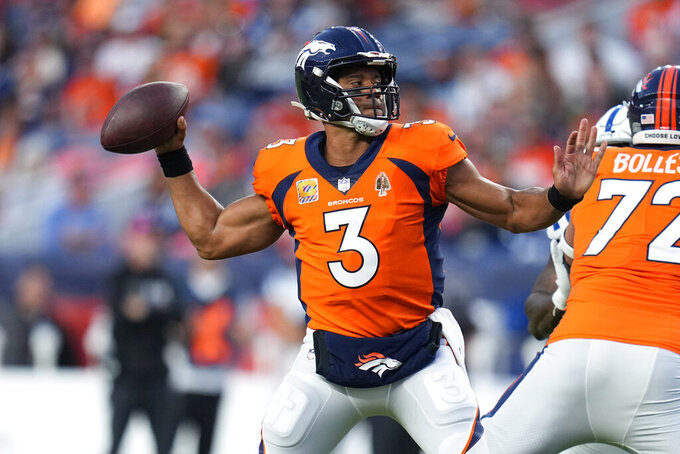 Denver Broncos quarterback Russell Wilson (3) throws against the Indianapolis Colts during the first half of an NFL football game, Thursday, Oct. 6, 2022, in Denver. (AP Photo/Jack Dempsey)

BETTING LINE: Chargers by 4 1/2, according to FanDuel SportsBook.

BRONCOS PLAYER TO WATCH: CB Patrick Surtain II. In just his second season, Surtain has surged to elite cornerback status, shutting down or severely limiting opposing quarterbacks’ top options. He returned an interception for a touchdown in his first game against the Chargers.

CHARGERS PLAYER TO WATCH: CB Bryce Callahan leads Los Angeles with two interceptions, the same total he had in 21 games for Denver the previous two seasons.

KEY MATCHUP: Denver’s linebackers vs. Chargers RB Austin Ekeler. With Josey Jewell (knee) dealing with yet another injury, it’s likely the assignment goes to Alex Singleton, and Jonas Griffith. Teams have had success against Singleton in pass coverage. Ekeler set a career-high with 173 yards rushing against Cleveland, and his 199 yards from scrimmage were the most in a NFL game this season. Los Angeles will need to maintain balance between Ekeler on the ground and its prolific passing game against the stout Denver defense.

KEY INJURIES: Broncos QB Russell Wilson is dealing with a strained latissimus dorsi muscle near his throwing shoulder which he injured two weeks ago at Las Vegas. Wilson received an injection to relieve discomfort last week, but didn’t miss any practice time leading up to the game against the Chargers. ... The Broncos have lost LT Garett Bolles (ankle), RB Javonte Williams (knee) and CB Ronald Darby (ACL) in their past two games. Also sidelined is LS Jacob Bobenmoyer (wrist, hand). ... Chargers RT Trey Pipkins III is expected to play after spraining his MCL against Cleveland. … WR Keenan Allen (hamstring) is listed as doubtful and likely to miss his fifth straight game.

SERIES NOTES: The Broncos and Chargers have alternated wins and losses over their past four games, with the home team victorious in every matchup. ... The past two games in the series have been decided by at least 15 points. ... The Chargers are 3-2 against Denver at home since moving to Los Angeles in 2017.

STATS AND STUFF: Wilson needs four touchdown passes to join Hall of Famer Peyton Manning (333) as the only players with 300 or more TD passes in their first 11 NFL seasons. ... Wilson is 0-2 against the Chargers, one of two teams he has never defeated. The other is Seattle, where he played for 10 seasons before being traded to Denver in March. The Broncos lost 17-16 at the Seahawks in their opener this season. ... WR Courtland Sutton is one of two players with at least 50 yards receiving in each of his first five games this season. ... OLB Bradley Chubb has 5½ sacks and is the only player in the league with five or more sacks and a pair of forced fumbles in 2022. ... The Broncos have forced a league-high nine fumbles so far, recovering three of them. ... The Chargers have allowed five sacks, which is tied with Cleveland for fewest in the league. Justin Herbert has been sacked once in each of the past three games while attempting 118 passes in that span. ... OLB Khalil Mack is one of three players with at least five sacks and six tackles for loss this season (Las Vegas DE Maxx Crosby, Dallas LB Micah Parsons). ... QB Justin Herbert has thrown at least one touchdown in 26 consecutive games, which is the third-longest streak in Chargers history. Philip Rivers had streaks of 28 (Dec. 9, 2012-Oct. 23, 2014) and 27 games (Oct. 1, 2017-Dec. 13, 2018). ... Los Angeles has allowed 46 points in the third quarter through five games (9.2 points per game). The defense gave up 84 points in the third quarter during the 2021 season (4.9 points per game). ... WR Mike Williams has at least 100 yards receiving in each of his three road games. He has 25 yards on three receptions with a touchdown in two home games. ... The Chargers offense had a season-low 17 penalty yards against the Browns, their fewest in 22 games under coach Brandon Staley.

FANTASY TIP: The Broncos haven’t allowed more than 200 net yards passing in a game this season, but that shouldn’t mean taking Herbert out of the lineup. He has thrown multiple touchdowns in three of his four games against Denver.