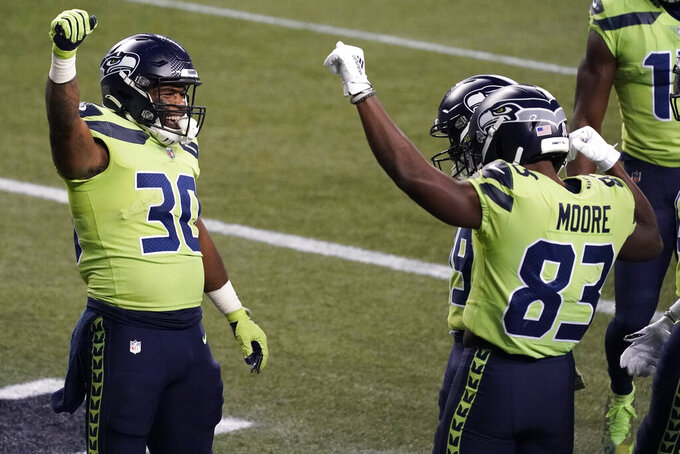 Seattle Seahawks running back Carlos Hyde (30) celebrates with teammates, including wide receiver David Moore (83) after Hyde scored a touchdown against the Arizona Cardinals during the second half of an NFL football game, Thursday, Nov. 19, 2020, in Seattle. (AP Photo/Elaine Thompson)

SEATTLE (AP) — Russell Wilson rebounded from his worst performance of the season to throw for two touchdowns, and the Seattle Seahawks moved back on top of the NFC West with a 28-21 win over the Arizona Cardinals on Thursday night.

Wilson was flawless, erasing the mistakes from the past four weeks when Seattle dropped three of four, including losses in the past two weeks to Buffalo and the Los Angeles Rams. The skid left Seattle in a tie on top of the NFC West with the Rams and Cardinals.

For a few days, Seattle (7-3) will be back on top alone until the Rams play on Monday night against Tampa Bay. It was an important victory for the Seahawks heading into the softest part of their schedule, with four upcoming games against teams with a combined 8-28-1 record.

But the biggest boost for Seattle was the return of its run game. Carlos Hyde rushed for 79 yards and a 2-yard TD run in the third quarter, and Seattle finished with 165 yards rushing.

Kyler Murray and DeAndre Hopkins couldn’t rekindle the magic from their last-second touchdown to beat Buffalo last Sunday. Murray was 29 of 42 for 269 yards and two TDs, but Seattle was able to get the kind of pressure on the QB that was missing from the first meeting.

And that pressure came through in the closing seconds. On fourth-and-10 at the Seattle 27 with 38 seconds left, Carlos Dunlap got around the edge and tackled Murray for his second sack of the night. Seattle finished with three sacks and seven QB hits after not touching Murray in the first meeting.