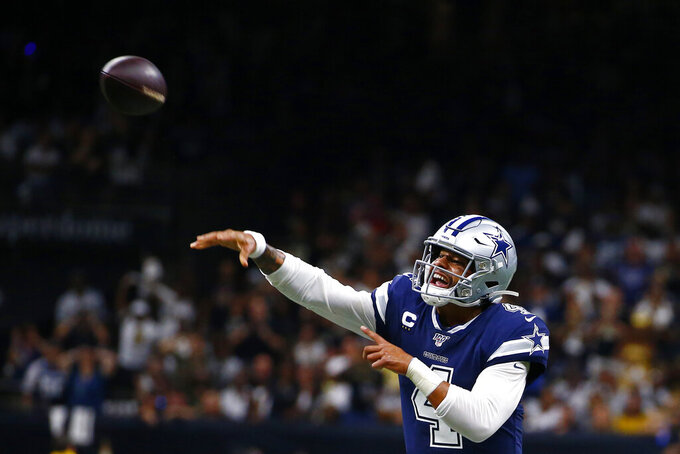 Look out, Tom Brady and the rest of the old heads. The young guns are moving in.

Every NFL game in Week 4 featured at least one starting quarterback age 26 or younger. There has already been a total of 52 such games this season, the most through four weeks of a season in league history. The previous high was 48 in 1987.

That happened after 20 quarterbacks age 26 or younger started in Week 3, most ever in one week.

IMPRESSIVE ALLEN: Carolina's Kyle Allen joined Wentz as the only quarterbacks to go 3-0 with zero interceptions in their first three career starts.

PICK IT: Patriots defensive back Devin McCourty is the first player in franchise history and the first in the NFL since Minnesota's Brian Russell in 2003 to record an interception in each of his team's first four games of a season. Russell's record streak was six.

300 CLUB: Mahomes and Ryan have thrown for at least 300 yards in each of their four games. Only Peyton Manning (five), Steve Young (six) and Kurt Warner (six) had longer streaks to start a season.

DUAL THREAT: Baltimore's Lamar Jackson is tied for the league lead with 10 touchdown passes and also leads all quarterbacks with 238 yards rushing yards.

ONLY JERRY AHEAD: Arizona's Larry Fitzgerald moved ahead of Tony Gonzalez into second place on the all-time list with 1,326 career receptions. Only Pro Football Hall of Famer Jerry Rice has more with 1,549.

SELECT COMPANY: Panthers running back Christian McCaffrey joined Pro Football Hall of Famer Jim Brown as the only players in league history with three games of at least 175 scrimmage yards and one TD in their team's first four games of a season.