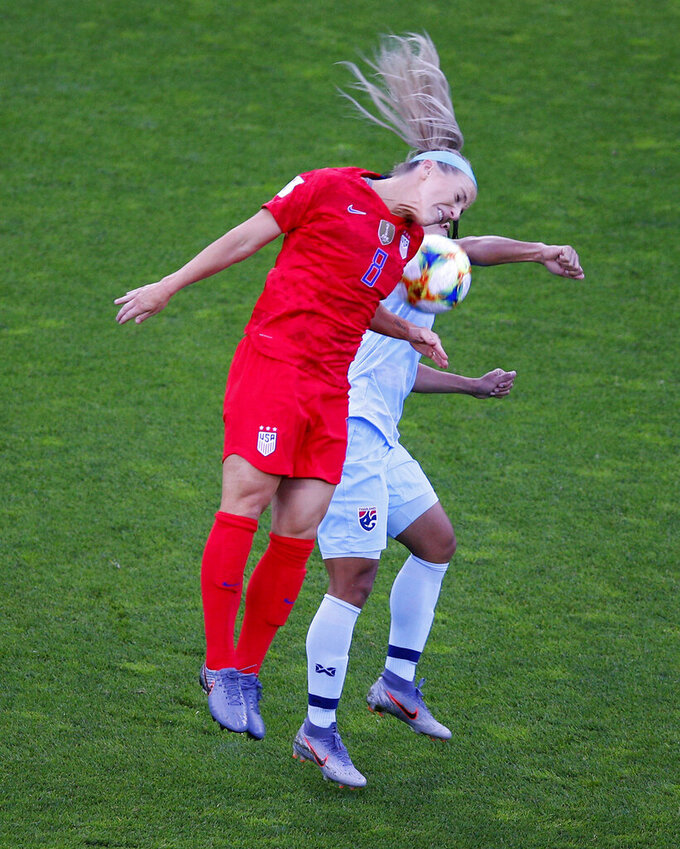 PHILADELPHIA (AP) — Zach Ertz is cheering for his wife in the Women's World Cup from minicamp for only a few days.

The Philadelphia Eagles two-time Pro Bowl tight end is heading to France on Friday to watch his wife, Julie Ertz, compete with the U.S. team. The defending champions opened with a record-breaking 13-0 rout of Thailand on Tuesday night.

"It's awesome being married to Julie, being able to support the people we love doing what they love to do," Zach told The Associated Press. "I've seen all the work she does each and every day and I've seen all the adversity she's faced over the past seven years we've been together. I've seen the injuries. I've seen her cry. I've seen the blood. I've seen the tears. Because she loves the game so much, I'm so invested in seeing her succeed. That hard work is paying off."

It's a role reversal for the sports power couple. Julie was in Minneapolis rooting for her husband when he made the game-winning touchdown catch in Philadelphia's 41-33 win over New England in the Super Bowl in February 2018. But the two were apart when the Eagles beat Minnesota in the NFC championship game. Julie was in San Diego for a national team match against Denmark and burst into tears afterward when she learned the Eagles won.

"It's very similar to how she would feel watching me play," Zach said about sitting in the stands. "It's special. It's definitely unique in a sense as an athlete, you always feel you have control of the game or of the situation. When I sit in the stands, I'm just a casual person with a vested interest in seeing a team succeed, seeing Julie succeed. It's a lot different (than playing) because you have no control when you sit in the stands."

Zach and Julie were married in March 2017, but they have to spend quite a bit of time apart because of their hectic schedules. They rely on their strong faith to overcome the difficulties prolonged separation brings.

"I can say with absolute certainty that what we've done in the past 2½ years of marriage would be dang near impossible if the foundation wasn't on Christ," Zach said. "It would be impossible without understanding we represent something so much bigger than just Zach and Julie. Our marriage was built on that foundation and will continue to be built that way."

The couple launched the Ertz Family Foundation last year following Zach's trip to Haiti with Eagles quarterback Carson Wentz and other teammates. The Foundation's mission is to "make a measurable impact in the lives of those living in underserved Philadelphia communities through youth education, sports and family enrichment programs."

"The love we have for each other and the love we feel in our faith, we just want to give that back to people all over to the world and this country," Zach said. "The main goal is to show people love, show people hope. No matter where they are, let them know people out there love them and care about them."

Zach is having fun throughout the Women's World Cup by partnering with FanDuel to choose a daily fantasy lineup to compete against other soccer fans. His No. 1 pick for each lineup is an easy choice.

"What FanDuel is doing for the women's game is incredible," Zach said. "My captain is my wife. She's my first pick. I'd be in big trouble if I didn't do that. I feel like I have a good team. I hope everyone wants to compete against me."