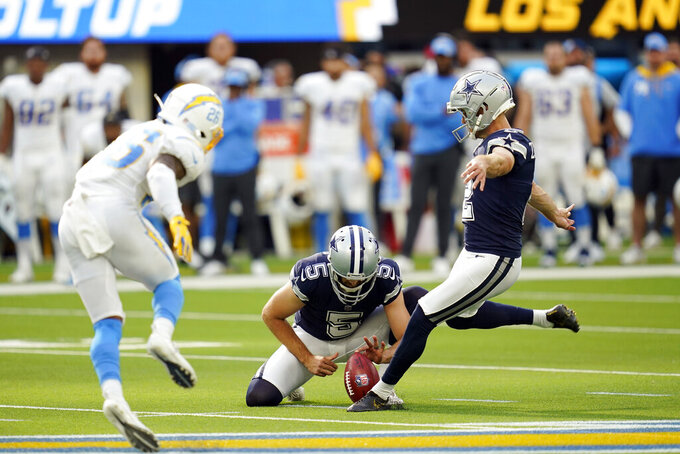 INGLEWOOD, Calif. (AP) — Throughout his rehab from a broken ankle last season, Dak Prescott thought about what it would feel like to be on the field again and lead the Dallas Cowboys on a game-winning drive.

Prescott directed the Cowboys on an 11-play, 49-yard march against the Los Angeles Chargers, culminating in Greg Zuerlein's 56-yard field goal as time expired for a 20-17 victory on Sunday.

“I mean, that’s what you do it for, for the ball in your hands for a chance to go win,” said Prescott, who completed 23 of 27 passes for 237 yards and an interception. “I was talking to the offense in the huddle that now we’ve got the game in a position that we wanted. We were able to capitalize, get into field goal range and let special teams go out there and do their job.”

Dallas (1-1) overcame the loss of five players who started its opener and ruined the Chargers' first game in front of home fans at SoFi Stadium.

“You see the best of Dak Prescott in those situations, and he knows those situations, puts a lot of time into it. I just really love his demeanor, his poise in two-minute drills, so it’s good to get these ones on Sunday," Dallas coach Mike McCarthy said.

Prescott got Dallas into Chargers territory with a 12-yard completion to Amari Cooper to the LA 45 with 36 seconds remaining. Three plays later, Zuerlein booted it through for his 11th game-winning kick and third with the Cowboys.

Zuerlein made all three of his attempts Sunday after missing two fields and an extra point last week.

“You see why we have confidence in him. This guy, he kicks field goals that put teams in the Super Bowl, and he’s definitely a Super Bowl-caliber champion-type kicker," McCarthy said. "He had two big ones today, and he hit the money one right at the end.”

The Cowboys had a little more balance offensively after dropping back to pass 59 times in 77 plays last week. Tony Pollard had 109 yards on 13 carries for the third 100-yard game of his career and Ezekiel Elliott had 16 carries for 73 yards.

The Chargers (1-1) got their 10th 300-yard game from Justin Herbert, but turnovers and penalties ended up looming large. Los Angeles was flagged 12 times for 99 yards and had a pair of touchdowns taken away.

“There were 20 (total) penalties in the game. It felt like a preseason game, to be quite honest with you. That was just the way the game was being officiated today, and we’ve got to play within the parameters of how the game is being called,” Chargers first-year coach Brandon Staley said after the team fell to 8-17 in one-score games since the start of the 2019 season. “I felt like last week we won the game as a team, and today I thought we lost the game as a team.”

Herbert's 37-yard TD pass to a wide-open Donald Parham was nullified when Jared Cook was called for holding. Three plays later, Herbert was intercepted in the end zone by Damontae Kazee on third-and-6 from the Dallas 9 after Keenan Allen appeared to slip on his route.

In the fourth quarter, a motion penalty took away a 2-yard score for Cook. The Chargers had to settle for Vizcaino's third field goal to even it at 17.

“Fundamentally we just had some calls and some penalties that got brought back, and some turnovers, and I can’t turn the ball over in the red zone like that and expect to win,” said Herbert, who was 31 of 41 for 338 yards with a touchdown and two interceptions. “That’s a pretty good offense we’re going up against, so we’ve got to put up more points.”

Dallas jumped out to a 14-3 lead early in the second quarter on touchdowns by Pollard and Elliott.

The Chargers closed to within a field goal on Mike Williams' 12-yard TD on a wide receiver screen after he had a 27-yard reception to get them into the red zone. Los Angeles then made the 2-point conversion on Austin Ekeler's run up the middle.

Vizcaino tied it at 14 with a 32-yard field goal midway through the third quarter.

It took just over 102 seasons, but this marked the first 14-11 halftime score in NFL history.

CBS posted a graphic about the oddity before the end of the first half. It was confirmed by Sportradar.

Vizcaino had a chance to tie it late in the first half, but his 44-yard attempt hit the left upright with 3 seconds remaining. Dallas got the ball at its 49-yard line, and Prescott hit CeeDee Lamb, who found an opening and went up the right sideline. He lateraled at the 17 to Elliott, who was forced out of bounds by Derwin James at the 3.

Chargers linebacker Kenneth Murray suffered an ankle injury on the opening drive but returned later in the first quarter.