Bengals in the mix in tough AFC North? Right now, they are 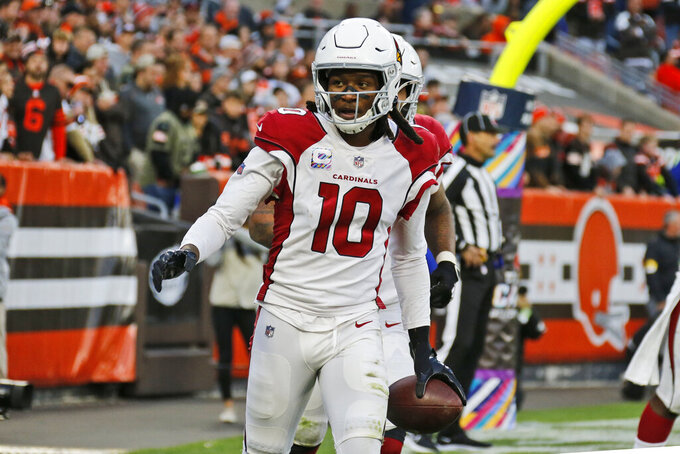 Arizona Cardinals wide receiver DeAndre Hopkins (10) celebrates after scoring a 9-yard touchdown during the second half of an NFL football game against the Cleveland Browns, Sunday, Oct. 17, 2021, in Cleveland. (AP Photo/Ron Schwane)

Nearly everyone expected a tight race for the AFC North title, which also could carry a playoff bye with it.

Not many of those prognosticators would have cited the Bengals as being in the division mix. Yet, if they win at Baltimore on Sunday, the Bengals (4-2) will be tied for the top spot with the Ravens (5-1), and looking back at Cleveland and Pittsburgh.

How did this happen? Cincinnati not the Bungles in 2021?

They have a solid defense led by linebacker Logan Wilson, and an emerging attack with Joe Burrow throwing to an upgraded group of receivers that includes first-round draft choice Ja'Marr Chase.

“Ja’Marr just keeps being that spark for us,” Burrow says. “When we have a guy like that, and when you have the connection we have, (they) can’t fall asleep on defense when you have that guy.”

This can be a true statement game for Cincinnati. The resourceful Ravens have overcome a slew of injuries and pulled off some stunning wins. Plus, Baltimore has won the past five meetings, including the past three by a combined score of 114-19. The Ravens are 5-1 for the fourth time in franchise history and the second straight season. They have never started 6-1.

The way Lamar Jackson is playing, nothing seems beyond Baltimore's reach.

“He understands this offense so well,” tight end Mark Andrews says of his quarterback. “He’s always had great ball placement and great eyes, but just the way he’s seeing the game, the game is progressing. It’s slowed down to him a bunch.”

The action began Thursday night, when Case Keenum stepped in for Baker Mayfield and made the most of his first start in two years, leading Cleveland’s injury-ravaged offense and the Browns to a 17-14 win over the Denver Broncos.

Mismatches galore: The points spreads for these two games hover around a total of 33.

Detroit is the NFL’s only winless team and has lost 10 straight, going back to last year, the league’s longest active losing streak. The Lions were routed by Cincinnati last Sunday, but before that showed lots of spunk. Coach Dan Campbell questioned quarterback Jared Goff's performance, and now Goff returns to LA, from which the Rams dealt him to Detroit for Matthew Stafford. A trade that looks massively one-sided.

“Appreciate my time in Detroit, appreciate all the players I played with, all the coaches that coached me and everybody else on our team," Stafford says. "But I don’t spend too much time thinking about it or reading that narrative, to be honest with you.”

The Cardinals are the lone unbeaten team, they come off an impressive win in Cleveland, and it would be shocking to see them stumble against the Texans, losers of five straight. Here are two good reasons why: J.J. Watt and DeAndre Hopkins.

Watt, a three-time NFL Defensive Player of the Year for Houston, got his first sack for Arizona against the Browns, deflected a pass in the fourth quarter two weeks ago to help the Cardinals hold on against the 49ers, and has become a presence up front. Hopkins, traded to Arizona before the 2020 season, has caught three TD passes over the past two weeks.

Arizona hopes to have coach Kliff Kingsbury and three players back from the COVID-19 list, including sackmaster Chandler Jones.

A pair of 2020 division winners headed in opposite directions.

Green Bay has won five in a row and Aaron Rodgers has thrown 12 touchdown passes with only one interception during the streak. The Packers have won their past five home matchups with Washington; the previous time Washington won at Lambeau Field was in 1988.

Washington was supposed to be stingy on defense. Well, it ranks last in stopping the pass and in scoring, and is 31st overall.

After a scintillating win over Buffalo, the Titans take on the other team from the 2020 conference championship game. A victory could have them singing Super Bowl ditties in Music City.

Look for the scoreboard operators to be busy. Neither defense has shown the ability to take command, which means Patrick Mahomes could be completing tons of passes for KC, Derrick Henry might be rushing for hundreds of yards for Tennessee.

Mahomes says the Chiefs aren't close to where they need to be. He knows Henry is close to being unstoppable.

"The way he’s able to run the football, to get 20 to 30, whatever, 40 carries it is and then he comes back the next week and he seems like he’s just as fresh as the week before,” Mahomes said.

“He’s a special talent who works his tail off to be who he is, and so we understand it’s going to be a great challenge for any defense to stop him.”

Following their impressive response to the Jon Gruden mess — a strong performance in a victory at Denver — the Raiders must show some staying power. Las Vegas had seven pass plays of at least 25 yards last week, the most in a game since at least 1991. The Raiders averaged 8.19 yards per play for their best performance since 1997.

They also found a pass rush, with Maxx Crosby involved in all five sacks. Philly, the most penalized team (54), also can pressure the passer.

Nobody envies Chicago, which goes from Aaron Rodgers, who yelled so accurately during last's week's win at Soldier Field that he owns the Bears, to Tom Brady.

The seven-time Super Bowl champion will need protection against a defense that leads the NFL with 21 sacks. If he gets it, there's no reason to think Tampa Bay won't put up a bunch of points. The Bucs top the league in passing and are third in scoring. Meanwhile, only the Texans and Jets are averaging fewer points than the Bears.

Brady is 5-1 lifetime against the Bears, with the lone loss coming last season. In those six career meetings, Brady has thrown for 308 yards per game and 15 touchdowns overall.

Jimmy Garoppolo returns at quarterback for the Niners, who come off a bye during which they stewed about three consecutive defeats. The Colts have won the past four meetings in the series. San Francisco’s previous win came in 2001 when it intercepted Peyton Manning four times in a 40-21 victory. That loss led to then-Colts coach Jim Mora’s “playoffs” rant.

Folks in Indy are raving, not ranting, about running back Jonathan Taylor. He ran for 145 yards in last week’s victory over Houston and had 116 yards receiving the previous week at Baltimore. In his past 13 games, Taylor has 1,291 yards rushing and 12 TD runs.

Even before Russell Wilson was sidelined because of finger surgery, Seattle had lost some luster as a difficult place to play.

The Seahawks are 0-2 at home in 2021, lost a wild-card playoff game there last season, and their defense, despite the outstanding play of linebacker Bobby Wagner, is more a Legion of Gloom. The previous time Seattle dropped four consecutive home games was 2008 when the Seahawks lost five straight.

Coming off a bye, the Saints have the second-best run defense, allowing 79 yards per game. With Wilson out, Seattle wants to run the ball but is injury-ravaged in its backfield.

Even as the Patriots have become mediocre without Brady, they've handled the Jets. A win Sunday would give them 12 in a row, the past four without their star QB. The Patriots have a 17-4 record against the Jets at Gillette Stadium and seek their sixth straight season sweep and 22nd sweep overall vs. the Jets. New York last beat New England in Week 16 of the 2015 season, and hasn't won at the Patriots in the regular season since Nov. 13, 2008.

Considering all of their injuries and ineptitude on offense, the Giants' best weapon could be kicker Graham Gano. Indeed, the Panthers’ past two wins over New York came on field goals by the current Giants placekicker, including a career-long 63-yarder in 2018.

Carolina has lost its past three outings, not coincidentally games standout running back Christian McCaffrey was sidelined for. The Panthers had eight drops in last week’s game, including three each by wideouts D.J. Moore and Robby Anderson.

So the Dolphins lose in London to the Jaguars, then don't take the bye week and now must face a Falcons team that was off last weekend following a win at Tottenham Hotspur Stadium against the Jets? Go figure.

Miami is 9-0 when it scores at least 20 points against Atlanta, 0-4 otherwise.