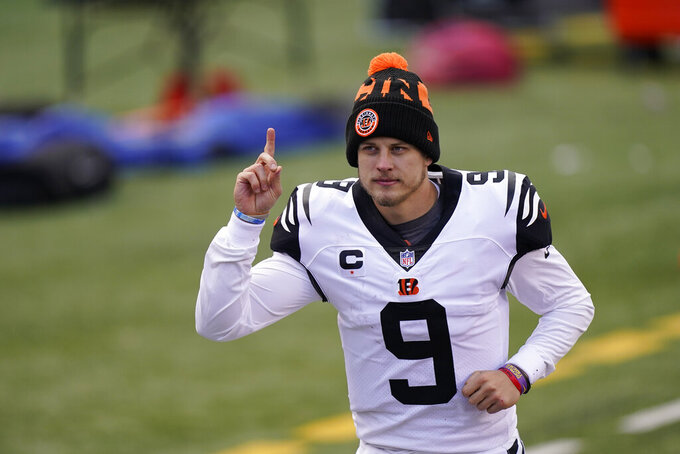 Coming off a two-win season, the most important factor for the 2020 Bengals is the development of rookie quarterback Joe Burrow.

Halfway through the season, Burrow has been as good as they've hoped. Perhaps better.

The No. 1 overall pick in the draft has 221 completions, the most by a player in his first eight career games in NFL history.

And the rest of the team can feed off his confidence.

“It’s pretty cool when you got a young quarterback that has that swagger," safety Jessie Bates said. "That knows he’s going to make a play. Crazy stuff. I can’t really explain it right now. But like I said, he’s going to be the face of this franchise for a long time.”

The following week, Burrow threw for 406 yards and three touchdowns, but the defense again couldn't get a stop and allowed Baker Mayfield to lead the Browns to a last-minute touchdown in a 37-34 loss.

On Sunday against the Titans, Burrow and the Bengals led 10-0 early in the second quarter. The Bengals had a double-digit lead at the half for only the second time in the past two seasons. However, this time Burrow threw two touchdown passes in the fourth quarter in a 31-20 win over the Titans.

“It’s just a lot of momentum going into the bye week, a much-needed bye week,” Burrow said. “We needed the win to feel good about ourselves.”

And it gave the Bengals something to build off after those close losses.

“Coach (Zac) Taylor talks about it every single week,” running back Giovani Bernard said on Sunday. “It’s about us. We know the type of players that we have. Obviously, we just haven’t been able to close the games the way we wanted to, but we were able to do that today. We know the guys who we have and the abilities that they can do. We were able to get that 'W' today, which was huge.”

And for Taylor it was his first win over a winning team as head coach.

“We don’t need to validate to anybody,” Taylor said on Sunday. “This is the expectation. We’ve earned it, they deserve it. They needed it, but to say anyone is shocked would be untrue because the guys knew we were able to do this all along.”

The Bengals will see how much improvement they've made in the second half when they face the stellar defenses of the unbeaten Steelers twice before closing the season against the Ravens.

“Well, quite honestly, I wouldn’t say he’s grown in the sense of understanding the game or whatnot,” Bernard said of Burrow. “Because honestly, Week 1, I felt like he had a complete grasp of this offense. And that is a huge thing just because we know how detailed this offense is. Obviously, he’s making more plays. He’s making better decisions, whatever it may be. But that confidence level has never grown or lessened or whatever. He’s always been that same exact person.”

Burrow and the offense. Despite the injuries to running back Joe Mixon and on the offensive line, the Bengals have scored at least 27 points in four of their past five games.

The run defense. Even in a Bengals win, the Titans had 218 yards rushing, led by Derrick Henry, who had 112 yards and a touchdown. And the pass rush, which has failed to generate pressure on opposing quarterbacks much of the season.

Tee Higgins. The rookie wide receiver from Clemson continues to make difficult catches to help sustain drives and is a nice complement to Tyler Boyd. He had six catches for 78 yards against the Titans and has 33 catches for 488 yards and three touchdowns for the season.

Carl Lawson. For a second consecutive week he lined up in the neutral zone at a key point in the game and prevented the defense from getting off the field. The Bengals need one of the defense's best pass rushers to avoid those types of mistakes.

Cornerback Darius Phillips left with a groin injury and the Bengals will hope to get at least some of their injured offensive linemen back after their bye week.

Zero — The first time that Burrow wasn't sacked in a game all season, protected by a patchwork and much-maligned offensive line.

Next week is the team's bye before heading to Heinz Field to take on the Steelers on Nov. 15.