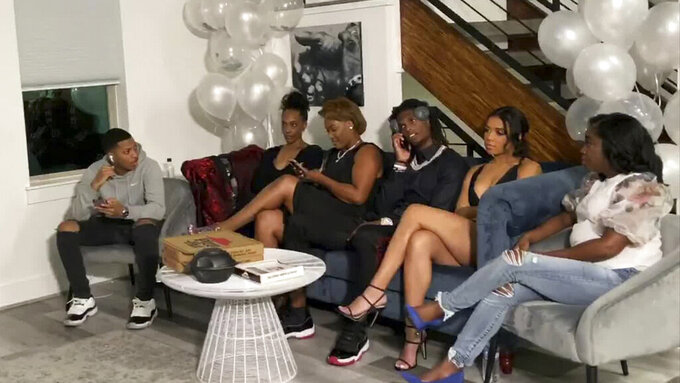 In this still image from video provided by the NFL, CeeDee Lamb talks on a phone in Houston during the NFL football draft Thursday, April 23, 2020. Lamb was chosen by the Dallas Cowboys in the first round. (NFL via AP)

Receiver CeeDee Lamb was still there in the first round of the NFL draft for the Dallas Cowboys, who decided needs at several defensive positions could wait.

Pass rusher, cornerback and safety were bigger needs for a team that already has a trio of offensive stars in Prescott, Cooper and two-time NFL rushing champion Ezekiel Elliott, not to mention perennial Pro Bowlers on the offensive line.

Now there's another intriguing offensive option for new coach Mike McCarthy, who won a Super Bowl in Green Bay with Aaron Rodgers and cultivated a number of standout receivers.

Executive vice president Stephen Jones said Lamb was No. 6 on their draft board, and owner Jerry Jones kept thinking Lamb would go next, all the way to the previous pick by Atlanta.

Jerry Jones said other teams probably thought Dallas wouldn't take a receiver because it wasn't the biggest need. The Falcons took cornerback A.J. Terrell of Clemson at No. 16.

Lamb was the third receiver to get drafted, behind former Alabama teammates Henry Ruggs III (12th to the Las Vegas Raiders) and Jerry Jeudy (15th to Denver).

“I think that was really surprising to us to see CeeDee sitting there,” Stephen Jones said. “We went through a lot of mock drafts. I can tell you he wasn’t a part of any of them just because we felt like he was a top 10 player in this draft and we’d never see him.”

The Cowboys went with Lamb when they could have taken LSU edge rusher K'Lavon Chaisson, and former Oklahoma basketball star Trae Young was excited. The Atlanta Hawks guard tweeted to Lamb that he was in good hands with young Dallas Mavericks sensation Luka Doncic. Young and Doncic were traded for each other on NBA draft night two years ago.

Lamb was projected to go slightly higher, so his availability was a bit of a surprise. The All-American skipped his final season and left as the school's career leader with catches of at least 40 yards (24). His 19-yard-per-catch average was the highest among Sooners with at least 130 receptions.

“Honestly, I didn’t know if they were going to take me,” said Lamb, who went to high school in the Houston area. “But when I saw my phone ring, it obviously surprised me. Everything that I dreamt of was definitely in that phone call.”

Lamb, who had 2,485 yards receiving and 25 touchdowns his final two seasons with the Sooners, is the first receiver drafted in the first round by Dallas since Dez Bryant out of Oklahoma State in 2010. Bryant is the club’s career leader in TD receptions with 73.

“We want to be able to have the flexibility to move all of our perimeter players around,” McCarthy said. “He’s an excellent fit for that. We just felt like we took the best player on the board and he’ll be very dynamic for our offense.”

The Cowboys have the 51st overall pick in the second round and the 82nd choice in the third round Friday night.

A year ago, Dallas sat out the opening night of the draft following the 2018 midseason trade for Cooper, who has highlighted free agency so far for the team with his monster five-year contract. Only Atlanta’s Julio Jones has a higher annual compensation average among receivers.

The Cowboys lost their best cornerback in Byron Jones to Miami and their 2019 sacks leader in Robert Quinn to Chicago in free agency. While the remaining cornerbacks lack the pedigree of Jones, Dallas is optimistic that suspended defensive ends Aldon Smith and Randy Gregory will be reinstated to bolster the line.

Smith signed a one-year deal with the Cowboys even though he hasn’t played since 2015 and has had several legal issues, including a domestic violence case in San Francisco that ended his most recent hope of returning in 2018. Gregory was productive in 2018 before his fourth substance-abuse suspension kept him out last season.

While the Cowboys had respectable overall numbers on defense the past three years, game-changing plays weren’t frequent enough for a team that missed the playoffs twice. That included last season, which started with expectations and a 3-0 record before fading into another .500 finish under Jason Garrett, whose contract wasn’t renewed.

Instead of focusing on that defense, though, the Cowboys gave Prescott more firepower in the passing game coming off career bests of 4,902 yards and 30 touchdowns.

Dallas is deep at receiver now as well. While Cooper is still the clear No. 1, Michael Gallup goes into his third season with the Cowboys believing he has plenty of promise. Gallup showed dramatic improvement from his rookie season, finishing with 1,107 yards and six TDs.

The Cowboys entered the draft needing a slot receiver after losing Randall Cobb to Houston in free agency.