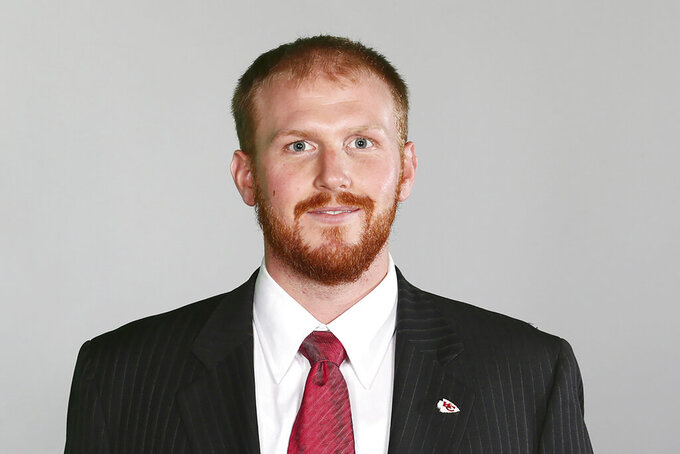 FILE- In a June 20, 2016 file photo, Kansas City Chiefs assistant coach Britt Reid is shown. Reid has been charged with driving while intoxicated after a crash that critically injured a 5-year-old girl. Jackson County prosecutors announced the charges Monday, April 12, 2021, against Reid, the son of Chiefs Coach Andy Reid. Prosecutors allege Reid was driving about 84 mph and had a blood-alcohol level of .113 about a half-hour after the crash near Arrowhead Stadium on Feb. 4. Police say his truck slammed into two cars stopped along an entrance ramp to Interstate 435 near the Chiefs' training facility. Five-year-old Ariel Young, who was in one of the cars, suffered a traumatic brain injury. (AP Photo) 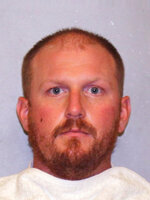 The Jackson County prosecutor's office said Reid's blood alcohol content shortly after the Feb. 4 crash was 0.113, above the legal limit of .08. He was driving about 84 mph in a 65 mph zone seconds before his truck crashed into two cars stopped on an entrance ramp to Interstate 435 near Arrowhead Stadium, prosecutors said.

One of the vehicles had stalled because its battery was dead and the second was owned by a cousin who had arrived to help, according to the charging documents.

A 5-year-old girl in the second car, Ariel Young, suffered a traumatic brain injury. Her family's attorney told The Kansas City Star on Monday that she was released from the hospital on April 2 and is being treated at her home. She is unable to talk or walk and is being fed through a feeding tube.

Reid, the son of Chiefs coach Andy Reid, could be sentenced to up to seven years in prison if convicted of the felony charge.

Reid surrendered to Kansas City police Monday afternoon and was released after posting $100,000 bond. As part of his bond release, Reid was ordered to not consume alcohol or visit any establishment where alcohol is the primary item sold. He also must report to a dependency services clinic for pretrial supervision, is subject to random drug testing and must use alcohol and GPS monitoring devices.

Charging documents say Reid told police he had just left work and was looking over his shoulder to see if he could merge onto the interstate when he hit a stalled vehicle on the shoulder of the road and then hit a second vehicle. Reid called 911 shortly after the crash, police said.

A Kansas City police officer who responded said he could smell alcohol and Reid's eyes were bloodshot and red, according to the documents.

The Chiefs said in a statement Monday the organization "remains steadfast in our concern for all who have been impacted by this tragic accident. Our prayers are focused on Ariel’s continued healing and recovery. The Chiefs are regularly in contact with the family’s designated representative during this challenging time.”

The family's attorney, Tom Porto, told the Star the charges were “absolutely appropriate under the circumstances. The prosecuting attorney and police department engaged in an extremely thorough investigation that ended with the appropriate charge.”

Britt Reid, the Chiefs' former linebackers coach, underwent surgery after the crash, which happened the week before the Chiefs played in the Super Bowl. He did not accompany the team to the game in Florida.

He was placed on administrative leave after the crash and his contract was allowed to expire, ending his employment with the Chiefs.