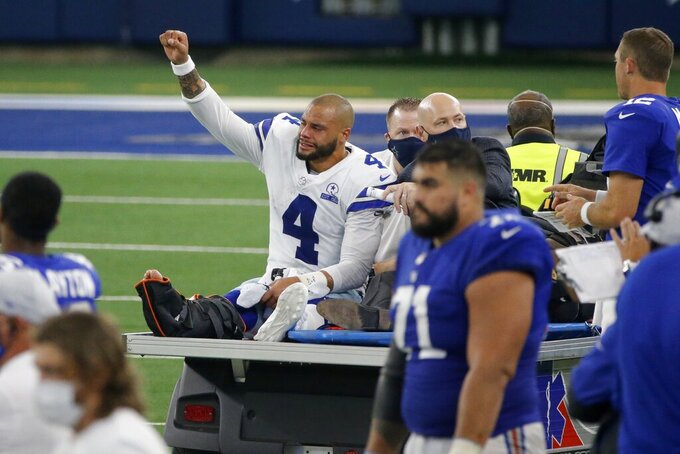 Dallas Cowboys quarterback Dak Prescott (4) lifts his fist to cheers from fans as he is carted off the field after suffering a lower right leg injury running the ball in the second half of an NFL football game against the New York Giants in Arlington, Texas, Sunday, Oct. 11, 2020. (AP Photo/Michael Ainsworth)

ARLINGTON, Texas (AP) — Daniel Jones and the New York Giants ended a two-game streak without a touchdown on the first drive in offensive coordinator Jason Garrett's return to the home of the Dallas Cowboys after nearly a decade as their head coach.

The Giants more than doubled their previous season high in points, had a two-touchdown lead in the first half and were up three in the fourth quarter after Dallas quarterback Dak Prescott sustained a gruesome season-ending ankle injury.

Still, New York couldn't escape its second 0-5 start in four seasons, allowing backup Andy Dalton's drive to a game-winning field goal after a couple of nifty touchdowns were called back by penalties in a 37-34 loss Sunday.

“That's all that really matters to us, to be honest with you, is the progress that’s being made right now,” first-year coach Joe Judge said. “The record will come in time. Obviously we’re not happy about losses, that’s not what we do. But I’ve seen a lot of progress on all fronts, in all games.”

Evan Engram scored on a 3-yard reverse on the opening possession, Kyler Fackrell returned an interception of Prescott 46 yards for a touchdown and a 14-3 lead and Darius Slayton had eight catches for 128 yards.

For a team that came in averaging barely 11 points per game, setting a season high in points before halftime while Jones avoided an interception for the first time will be a slight tonic.

Then there were the mistakes that seem to haunt winless teams, such as Jones' fumble on a sack by DeMarcus Lawrence that was returned 29 yards for a touchdown by Anthony Brown.

Lineman Nick Gates was called for an illegal shift in the second quarter when a fake field goal completely fooled Dallas and holder Riley Dixon popped up to throw a 27-yard scoring pass to Engram, who was all alone. The Giants had to settle for a 50-yard field goal from Graham Gano, one of three from at least that far (the others were 55 and 54).

In the third quarter, Slayton had a 31-yard touchdown pass wiped out on offensive pass interference against Damion Ratley, who ran into Dallas cornerback Jourdan Lewis a few yards past the line of scrimmage to turn Slayton loose.

“I want to go back and look at it on tape to see exactly how far down field ... to me, on those plays, sometimes it’s up to us to execute the right way,” Judge said. “I want to make sure I get a good shot of that on film before I make any comments.”

Prescott was going down in the arms of defensive back Logan Ryan at the end of a 9-yard run in the third quarter when the Dallas quarterback’s lower right leg got caught under Ryan and appeared to snap.

The team said Prescott had a fracture dislocation of the right ankle and was taken to a hospital, where surgery was planned later in the day.

“I feel terrible,” said Ryan, who broke his leg late in the 2018 season with Tennessee. "It was a routine football play. I studied a lot. I thought this game would come down a lot to me and Dak.

“I know it’s a team game, but my job in this game plan was to make it tough on Dak. He made it really tough on us. He was tearing it up there and he was making it had on me. That’s why this sucks.”

Garrett played a big role in the development of Prescott's career, sticking with the rookie in the middle of a long winning streak when Tony Romo was healthy again after Prescott replaced the injured Romo in the 2016 preseason. Garrett wasn't available to reporters after the game.

“Before we get too much into football with the game itself, rivalry or not, all of our thoughts and prayers are with Dak Prescott,” Judge said. “Respect him as a player, more as a person. We hope for the best recovery for him.”